Alex Tsirigotis raises over £15,000 for OMS by running Athens Marathon!

After successfully completing his challenge, Alex tells us about the experience and reveals just how much he raised.

Earlier this year we announced that Alex Tsirigotis would be running the Athens Marathon to raise awareness and funds for Overcoming MS. After successfully completing his challenge and raising £15,000 in funds, Alex writes about his experience with the aim of spreading hope to others...

2013 started off as a pretty positive year. I completed the first hurdle in a series of financial exams, my wife and I bought our first home together, and we were expecting a baby. It was around this time I started experiencing some visual impairments whilst playing squash and football.

After several referrals and meeting with physiotherapists and cardiologists, I unexpectedly found myself sat in a neurologists office being diagnosed with multiple sclerosis (MS). I didn’t know much about MS but it did not take too long to learn that it was a chronic disease that attacks the central nervous system (brain, spinal cord, and optic nerves) and was a condition without a "cure." Its usual prognosis was often disabling. I was told at one of the initial consultations that I should expect to encounter mobility issues and that I would likely need walking aids within three years. 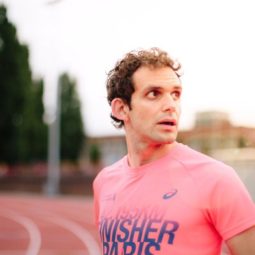 Initially I took the news well, then badly, then well again. It was a bit of a rollercoaster of emotions for both myself and my then pregnant wife. We felt like we were waiting for the unknown to strike at any point and it was really difficult to move past it. I spent quite a few months getting my head around the fact that playing football and group sports was no longer going to be a part of my life. I was really fortunate to come across the charity Overcoming Multiple Sclerosis (OMS) pretty quickly after diagnosis. OMS advocates an evidence-based lifestyle program to help those impacted by multiple sclerosis and could provide examples of people “defying the statistics.”

I immediately started following the OMS Recovery Program which involved significant dietary changes and the addition of meditation, mindfulness and regular exercise. OMS also offers a community that enabled me to connect with people in similar situations.

It took me about 18 months after diagnosis to start really believing that I might have some control over my future with MS. During this time, I started to enjoy running - something I had engaged in minimally up until that point. About two years after diagnosis I completed my first half marathon and my first-ever marathon in Paris.

Three years after my diagnosis I cycled from London to Paris, ran the Venice Marathon, tackled a 50 km Ultra Marathon and followed it up the day after with a half marathon completed in London in a personal (PB) best time. The damage done to my vision remains. When I run or overheat my eyesight weakens. This is because the nerves that transmit the signals from my eyes to my brain have been damaged by my MS. Imagine you are someone who needs strong prescription glasses and then all of a sudden the glasses are taken away from you - you can still make out shapes but all the details are significantly blurred. My most recent MRI at my four year check up revealed no disease progression since my diagnosis. This led my doctor to surmise that I too was defying the statistics like many of my fellow OMSers. 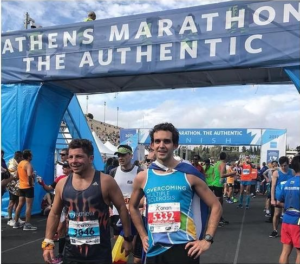 At around this time last year, I happened to bump into a gentlemen in a bank (branches still play an important role in this golden age of digitization). He was visibly distressed and explaining to the bank clerk that his son had recently been given a diagnosis of multiple sclerosis and this was weighing heavily on the family.

As I was leaving I managed to speak with him and share my personal story. After exchanging numbers I connected with his son.

Through this I became even more aware of the importance hope can have on people’s general attitude and outlook on life. Following my recent positive brain scan results, I felt I wanted to do more to help others in similar situations. Given my new-found enjoyment of running, I decided I would do this by taking on the Athens Marathon in order to raise much needed funds for OMS and also show that having MS shouldn’t prevent you from challenging your body.

My close friends and family were already aware of my diagnosis, however, in order to do what I had in mind, I knew I needed to disclose my condition to a wider audience, including my employer. This in itself came with its own stresses - you never know what the reaction will be to you once you open up publicly about your health. Having a strong network behind me and coming from a position of strength, I felt confident in making a leap of faith and publicly communicating my diagnosis. This was followed up with releasing a short video which featured my family and I telling my story in order to raise funds and awareness of the work of OMS. 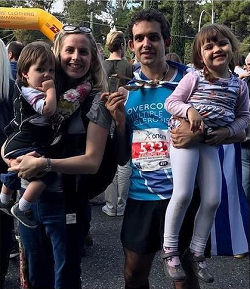 Since releasing my story and short film, ATOMS, I have been overwhelmed by the messages of support received. Through word of mouth and social media, these messages have come from across the globe. The actual run in Athens was every bit as special as I hoped. Starting in Marathonas next to the Olympic flame, running through small villages with locals playing traditional folk music, to finishing in the iconic Panathenaic Stadium in front of my family within a cheering crowd! The course itself was hot and hilly but the support garnered throughout helped me power through to achieving a PB (personal best time).

The memories of the experience have already outlived the aches from putting my body through the 26.2 miles of the marathon itself. Even after the event in Athens I have had people reach out to me, impacted in some way by MS, who had not previously heard of OMS and their work. They are now able to explore an option, which in their minds, was previously unavailable. The benefits of recapturing hope and Its impact on families - just like mine - cannot be underestimated.

So very inspiring, thanks for sharing your journey. And so to am I! 5km FUNdraiser for OMS is just the start!

Running 100km in support of OMS

Family supporter runs for 91 days and for 819 km, to raise funds

Take on the 2.6 Challenge to support OMS