My story started when I noted a strange tight band feeling around my torso after a game of rugby. I was aged 19 and this would have been 1972. I thought no more about it, I may have just pinched a nerve. An odd numbness would come and go, however, following the initial sensation

I am 63 year old a father of four, and I'm employed as a chartered surveyor, working insane hours surveying residential property in London and southern England.

My story started when I noted a strange tight band feeling around my torso after a game of rugby. I was aged 19 and this would have been 1972. I thought no more about it – I may have just pinched a nerve.

The origins of my MS

An odd numbness would come and go, however, following the initial sensation. I made a career move to London in 1977, buying investment property for financial institutions and working for a number of companies and I carried on working normally – three-hour lunches and rugby. (It’s a different world now!)

But all this was cut short when I collapsed on the street, only to be taken to the A & E at Paddington hospital. I was initially tested for epilepsy. Although I recovered within a couple of hours, I was referred to a consultant at Hospital of Nervous Diseases in Queens Square. This was 1978.

Many tests followed, including a lumbar puncture – the most painful experience of my life! – and I was eventually diagnosed as suffering from MS. But there was little advice given on the seriousness of the condition or of a future prognosis.

Progression of my condition

Fast forward six years and I was preparing to fly to USA on business. I woke in the morning to find I was paralysed on the left hand side – no use of my arm, hand, leg or foot. Once again I was admitted to Queens Square Hospital, London. The treatment was steroids (which I hated as they made me feel as high as a kite).

Thanks also to a dogged attitude, hard work with a fantastic if not a little brutal physio, I walked out of the hospital and resumed my life with some damage to my nervous system, weakness to the motor nerves on the right hand side and sensory nerves of the left, which could be well disguised.

In 1987, my marriage broke up and I divorced, which was extremely stressful. That and a business failure, due to the ERM problems in 1989 created huge emotional pressure and I went into another relapse, where I could not speak or use my hands – very frustrating to be unable to communicate! My parents lived in Cornwall, and that's where I went with my second wife (then fiance) to recuperate, learning to walk again after six months. Afterwards I returned to London. 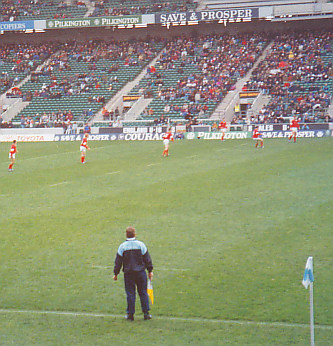 In 1990, I was introduced to acupuncture by my wife, walked into the clinic with a stick and left without it, I was also introduced to a different diet, Natural Hygiene, and to a diet and lifestyle book Fit for Life.

I combined acupuncture and this diet very strictly and felt fantastic, resumed my rugby career as a referee, joined the RFU Touch Judge Panel in 1991 and remarried, undergoing fitness tests and officiated at many games at a very high level, including Internationals at Twickenham, before retiring in 2003.

However, as my life entered a more turbulent stage, I slowly slipped into a less strict diet, with added financial problems, stress and the loss of my third business and I started feeling more pronounced symptoms – numb feet and hands and poor balance.

I work 10–12 hours a day and almost lost hope of ever feeling even partially well, until my wife passed me a newspaper article about OMS and I changed my diet totally, giving up dairy and meat (all) overnight, taking flaxseed oil, vitamin B12 and D3 every day.

Changing my lifestyle for the better

This led to the purchase of a NutriBullet blender and after a few days creating smoothies, I felt my hands again. I didn't have full sensation but they were at least as good as over the past 20 years.

My feet are also better, balance okay, albeit still a teeny bit wobbly, and my stamina improving – I now manage a 250m swim with my 10-year-old three times in a week.

I also play rounders with my grandchildren on the beach, running like I haven’t done for years, walking miles rather than yards.

I don’t know how much more of my health will return but I will not change my diet again and will read with interest Professor Jelinek’s books. But I still find it difficult to control my emotions a problem which has become worse over the years and relapses, a Disney movie or a gold medal win is enough to reduce me to a blubbering wreck!

“Everything can be taken from a man but one thing: the last of the human freedoms—to choose one’s attitude in any given set of circumstances, to choose one’s own way.” – Viktor Frankl
Dislike 0
1 Likes
0

Franziska from Switzerland, shares her love for hippotherapy - physiotherapy on a horse and the benefits it has for her and her MS symptoms.
Dislike 0
1 Likes
3

The shifting tides of MS

"The mental health benefits of exercise have helped me in managing depression, and especially my stress levels, allowing me to set goals and focus on something larger than my disease."
Dislike 0
1 Likes
3

"OMS was never easy - and that's a good thing"

"If I could go back six years — with the knowledge I have now — and take a pill with the same outcome but without the effort, it would be a hard no. Why? My health journey on this protocol has forced me to confront many delusional behaviors around my own health and take serious inventory of my life."
Dislike 0
2 Likes
1