My neurologist who told me straight up that if I didn’t start doing some exercise, anything, I soon would arrive at the 'point of NO return'. 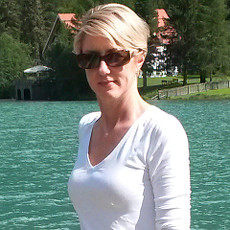 As far as the movement requirement was concerned, anything having to do with putting my body in motion was not only difficult, but it was also very demotivating to say the least.

On those brave days when I decided to dust off my walking aid and take a few more-than-necessary steps, I would swear that anything so strenuous and downright demoralizing was just not worth the effort.

My propensity towards limiting any and all physical efforts brought me face to face with my neurologist who told me straight up that if I didn’t start doing something, anything, I soon would arrive at the "point of NO return" (her exact words).

But I do not want to describe how rotten I was feeling. No need. Many of you know some form of this unfortunately typical story. 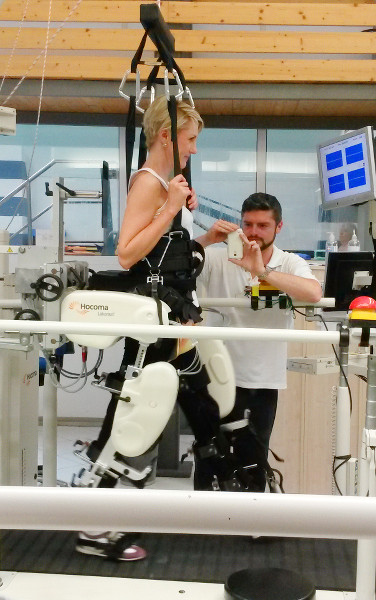 Instead I am here to tell you about that one particular day in which I arrived at the point of return. There I was, catch-22, desperate with the fact that if I didn’t do something that I couldn’t do, I would not ever be able to do it again. But then, two wonderfully magical words spilled out of my physiotherapist's mouth: “robotized exoskeleton.” At that very moment I knew. I just knew.

"Imagine the scene of me being mechanically manipulated on a pimped-out treadmill, bawling my eyes out at the sheer wonder of being able to walk correctly again."

Re-learning how to walk: The Lokomat

I was strapped into a supported harness which resembled that of a parachute and the legs of Robocop were hooked onto mine. The treadmill started rolling and those skinny legs of mine were guided by the machine into taking slow and carefully coordinated strides.

I was overcome with a sense of well-being as my legs were set in motion and all the muscles connected to such a complicated task as walking were thrust out of hibernation.

I was alive again. Imagine the scene of me being mechanically manipulated on a pimped-out treadmill, bawling my eyes out at the sheer wonder of being able to walk correctly again.

My body and my mind had totally forgotten what an exhilarating experience the conquest of the upright – and mobile – position was. Call-out must be given to this ingenious contraption. It is called Lokomat. Hocoma, a company in Switzerland, manufactures what they define as a machine for functional robotic gait therapy.

In a nutshell, its ability to have the patient repeat physiologically correct movements helps him/her to relearn the corresponding motion sequences.

It is used for all sorts of neurological disorders such as stroke, spinal cord injury, traumatic brain injury, Multiple Sclerosis and Parkinson’s disease. Session after session in locomotion, I must have gotten the ball rolling in that vast and mysterious meander of neural pathways of mine.

Walking works for me

Little by little I was able to increase my strength exactly in those muscles which were necessary for walking. It is like a no-brainer.

I had tried cycling and various physical therapy techniques with balls and boards and bands but, hey, that was not targeting the deficit. In order to be able to walk, I needed to WALK.

I made a U-turn on that road of no return and today continue to walk a path in the direction opposite of where it was heading three years ago. My enthusiasm for Lokomat abounds and I want to share it with as many people as possible. So now that I have finished my story, please go Google 'Lokomat.'

Where are you in your journey now?

Back in August 2020, OMSer Nigel Bartram shared a request with the community for your funny stories surrounding MS. Below is Max's story which will be included in the book 'MS... a funny thing (well sometimes)'.
If you would like to submit a story to Nigel, please see the details at the bottom of this page.

How exercise can help your bladder symptoms

No, exercise is not a miraculous cure for everything, and doing 10 yoga triangle poses a day will not solve all your problems. But yoga does offer useful tools to keep your pelvic floor and bladder healthy.
Dislike 0
0 Likes
3

Spasticity is one of the most common MS symptoms, and often feels worse at night. This is because it can be aggravated by reduced movement, tight muscles and pain from other symptoms. If you have increased MS spasticity at night you should look carefully at your sleeping position, mattress and pillows, as well as considering temperature regulation and the timing of your medication. There are also MS spasticity exercises you can do in bed.

Have you ever felt calm one moment and then suddenly overwhelmingly stressed or angry? This rapid change in mood could be a direct or indirect symptom of MS, and can often be overlooked.
Dislike 0
0 Likes
0