This article was prompted by a recent forum post from a young man, about to embark on his chosen career, who had just been diagnosed with multiple sclerosis.

This article was prompted by a recent forum post from a young man, about to embark on his chosen career, who had just been diagnosed with Multiple Sclerosis. His question was, did this mean he had to give up on his dream job?

Giving up on the dream?

We have all been there, happily planning our way through life, dreaming about the future, and then – WHAM. Multiple Sclerosis. What does it mean for us? We continue through life with more trepidation.

Doctors, online information, people in general tell us to ‘proceed with caution.’ Yes, we might have planned an exciting career, or a family, or a long-awaited holiday, but now we need to stop and think, because we have MS.

The thing is, despite all their warnings, no-one has a crystal ball. What if this young man did give up on his dream job and then, 30 years on, found that his MS was still stable? That he could have had that career after all?

No-one is born with a script in their hand. As the old saying goes, "the only certainties in life are death and taxes."

I was brought up in a middle-class family, where it was assumed I would go to university, meet someone, get married, have children.

If you’d told me twenty years ago that, by the age of almost forty, not only would I still be single and childless, but also ‘disabled’, I’d possibly have looked for the nearest cliff to throw myself off.

Thankfully, I wasn’t in possession of a crystal ball either. I have never been a person who approached life with too much caution.

I like to think I have quite a balanced view, but I am an optimist and I tend to err on the side of positivity. At the beginning of my MS journey, before I found OMS, my symptoms were fairly mild.

The word ‘benign’ had even been mentioned a couple of times. I was a 30-something single, independent woman. I had a career, and I had plans.

One of my main plans was to purchase my first property. Living in London, this meant saving long and hard. I finally got my foot on the property ladder – a first-floor Victorian conversion flat that needed a bit of work.

It was perfect. Seven month after moving in, I suffered my first significant relapse. and I found myself in hospital, pretty much paralysed from the waist down.

At the time, doctors looked at me with concern when I told them I lived alone. Ambulance crew told me I would have to move house as they carried me up the fifteen steps to my front door.

This weekend, after almost four and a half years, the final moving box was unpacked. The journey I took to get here wasn’t quite what I’d planned; family and friends have had to help, and I’ve had to pay tradesmen to complete jobs that I may previously have undertaken myself, but I haven’t had to move out and I am still capable of climbing the stairs. My dream has come to fruition. 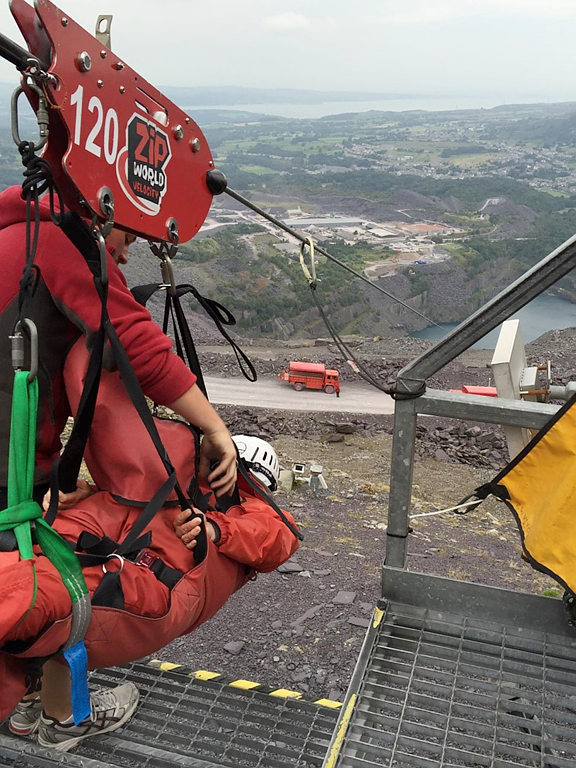 In the face of negativity

Alongside the uncertainty of MS, the negative opinions of other people – medical professionals, charities, complete strangers – can also make life overwhelming.

Invariably, these views are the opinions of people who don’t have MS themselves. Indeed, the other month, I booked a taxi to take me to the station. The usual conversation ensued – resulting in me explaining that I was using crutches as I have Multiple Sclerosis. “Still,” the driver concluded, “at least you’re still getting yourself out and about.” “I STILL WORK FULL TIME!” I exploded, making my job title seem far more important than it actually is.

On top of this, despite the crutches, I was travelling to Wales to meet up with three friends so we could throw ourselves headfirst down the northern hemisphere’s longest zip wire at speeds of 120mph (pic above).

This was the second time I’ve performed this trick, each time raising money for research into Duchenne Muscular Dystrophy. DMD is a condition that affects young boys.

They can see a decline in their health from as young as six, and their young lives can be cut short by their early twenties. Yeah – suddenly MS doesn’t seem that bad, does it?

If I’d told my taxi driver the reason for my journey, I may well have blown his tiny, patronising mind. It often takes a thick skin, but it is important not to allow other people’s preconceived ideas about MS become your own.

The unique nature of MS

Your journey with MS is yours and yours alone. Just because I suffered mobility issues three years into my journey, doesn’t mean that you will experience the same thing. This is why MS is so difficult to diagnose and treat – there is no ‘one-size-fits-all’ pattern.

Sadly, the general opinion of MS is that you will slowly decline into a wheelchair and death, yet Professor Jelinek has proved that this doesn’t need to be the case. I

read a comment on an MS blog recently from a woman who was struggling to walk as far as she had before. She surmised that soon her husband would have to walk their dogs alone.

It was full-on doom and gloom. I wondered how much more miserable she would have been in my shoes? I can’t even contemplate walking a dog more than 200 metres at the moment and I don’t have a husband who could help out. Hell, I don’t even have a dog.

On paper, her situation looked quite rosy compared to mine yet my outlook was far more positive. As I learned on a recent mindfulness course: concentrate on WHAT IS, rather than WHAT IF.

MS puts enough blockades in your way; don’t add to your problems by thinking ‘WHAT IF…?’. If you want to do something, go for it.

Don’t assume that MS is going to stop you. If you’re reading this, I guess you have found the OMS program because you believe that there has to be something better than what the doctors predict.

Maybe you’re as stubborn and pig-headed as I am, and you’re determined not to let MS confine or define you. If you are following the OMS program, you have every chance of living a long and fulfilling life with MS.

You have a real chance to slow, or even reverse your symptoms. I am four years into the OMS program and I can vouch for the fact that things can slowly but surely improve.

Realistically, my life must be approached with a little more thought at the moment. My holidays, for example, can’t involve too much heat or mountain climbing.

Work-wise, I can’t do exactly what I used to, but with some small adaptations I am still holding down the same full-time role I have held for 12 years. But MS doesn’t stop me pushing my limits. Whilst the NHS physio gave me some gentle exercises to perform, the Personal Trainer I have recently employed pushes me – and I welcome it.

I am seeing results. I can do more than the ‘experts’ expect. January 2017. Get yourself a piece of paper and a pen and write down what you want to achieve, no matter how outlandish.

Don’t stop to think, “Hang on – I have MS. I might not be able to achieve that.” Look to the future with positivity. It might take us longer to get there than some, but that doesn’t mean we have to stop trying.

Dream big and push yourself just a little further than you or your medical professionals expect. You might just surprise yourself, not to mention a few other people. Defy expectations!

"OMS - hope in a cloudy state of being"

Lily, from New South Wales, Australia, shares her story of how she reacted to receiving a diagnosis of MS and the hope OMS offered.
Dislike 0
0
0
Login Register