Eight half marathons in eight countries in aid of OMS

Karin Robertson has just one left to go! 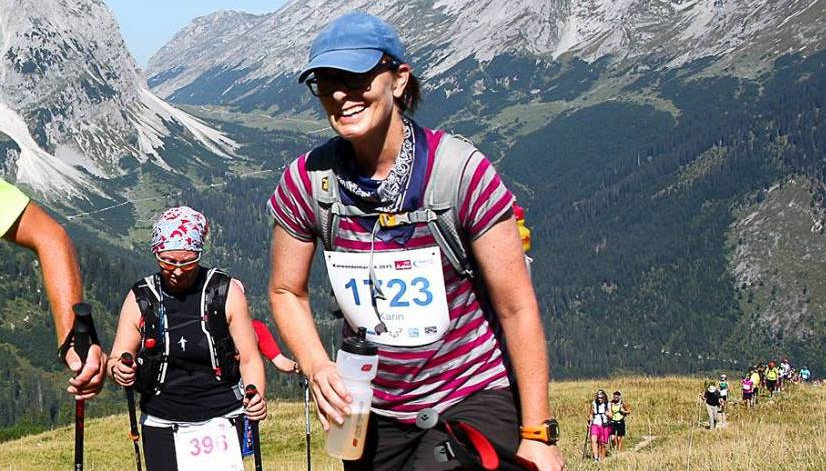 How’s your geography OMSers? Reckon you could name the eight countries that border Austria? It’s an easy question for Karin Robertson and her husband Ian who live there and so know the neighboring nations well.

A little more demanding however, is the fundraising challenge that Karin gave herself of running a half marathon in each of them, over the course of a year. Karin has MS, and describes OMS as having given her hope.

The objective of her multiple half marathon challenge was not only to set herself a goal, but to raise both funds and awareness about OMS, and to turn around what she describes as the doom and gloom surrounding an MS diagnosis in order to give people hope and a truly positive way forward.

So, to the challenge! First up, in April last year, was north Italy, with Switzerland following soon after. A month later, the couple found themselves in Finland where, despite it not actually being on the list, the Helsinki half marathon was too inviting to resist so Karin added that one in too.

Why not?! Back to the program, and on to Liechtenstein where Karin had to freestyle it a bit due to a lack of any organized events. The solution? Simple – Ian dropped her off at one end of the country, and picked her up at the other (a good few kilometers over the half marathon distance apparently, but who could stop short of running the entire length of Liechtenstein?).

Run number four was the Czech Republic, which was another solo effort as there were no events scheduled; five saw Karin complete the distance at a run in Germany, crossing the finishing line in Munich’s Olympic Stadium; and number six was the Ljubljana half marathon in Slovenia. Wow wee.

You’d be thinking Karin would be looking forward to finishing the final two and putting her feet up, right? We did too, which is why we were a little stunned to hear what happened in Hungary… In January (which is DEEP winter in central Europe), Karin strolled up to the start line at Lake Neusiedler which crosses the Austrian-Hungarian border, about to embark not on a half marathon but on the Burgenland 24 Extreme.

This is a 120 km course, around the lake, expected to take the best part of (as the name suggests) an entire day. That amounts to almost six half marathons, one after another, in freezing conditions.

Eighteen hours after starting, and having covered over 100 kms, Karin quite rightly decided she’d done her bit (five times her bit, to be precise) for Hungary.

A combination of the bitter cold, blistered feet, aching shins and actually just pure “misery” meant that it was time to tick Hungary off. As Karin says on her JustGiving page, she considers her Hungarian half marathon completed, and assumes she can be forgiven for not running! Well yes, we suppose so.

If you want an idea of what Karin went through in Hungary, then watch the video of her experience at the end of this post.

So, that leaves one half marathon left to run, and it’s already in the diary. The end of this month will see Karin in Slovakia where she will, we’re sure, finish this epic effort with a flourish!

Just as Karin has added extra kilometers to her distances along the way, so too has her fundraising target been duly exceeded, more than doubling the amount she was hoping to raise.

We thank Karin, her wonderful support crew, and everyone who has got behind this incredible challenge and donated money to her cause. We look forward to hearing how the last leg goes in a few weeks (and whether sheactually stops at the finish line…)