Is Epstein-Barr virus the cause of MS?

Dr Jonathan White explains the latest research on the Epstein-Barr virus as a cause of multiple sclerosis. For some years now, there has been a section of the MS community convinced that Epstein-Barr Virus (EBV), the pathogen behind infectious mononucleosis (glandular fever), is the common denominator causing MS. Whilst genetics, vitamin D levels, diet etc. are all undoubtedly involved, they say, an individual is still extremely unlikely to develop MS unless they have been infected with EBV. If they are exposed, particularly in their late-teens or early twenties, and especially if they develop symptomatic glandular fever, this is the final immunological insult to light the fire of MS. Once infected, the virus lies dormant in certain immune cells (B cells) and antibodies remain in the bloodstream. 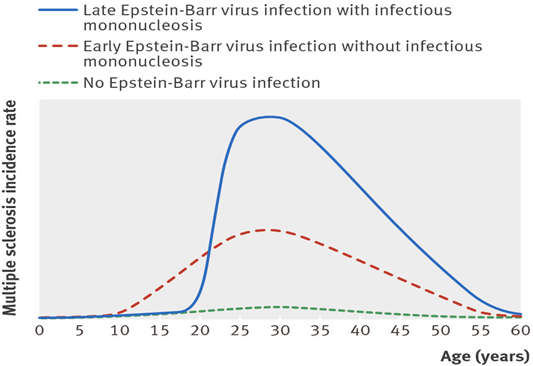 Whilst the basic science and epidemiological evidence is very compelling, it has always considered an association rather than the ultimate causative factor. More than 90% of adults are infected with EBV, yet MS is a relatively uncommon condition, so further evidence was required before it could be more widely accepted.

In an astonishing piece of research, the team from the Harvard T.H. Chan School of Public Health studied more than 10 million young adults on active duty in the U.S. military, over 20 years. They identified 955 people who were diagnosed with MS during their period of service.  Blood samples were taken to determine EBV status and then repeated twice-yearly throughout the participants’ period of service.  5% of the cohort were negative for EBV at the beginning of their service. In those subsequently infected with EBV, the researchers found that their risk of MS increased 32-fold, but was completely unchanged after infection with other common viruses. Serum levels of neurofilament light chain, a marker of nerve damage and destruction that is commonly seen in MS, only increased after EBV infection. Their findings could not be explained by any other known MS risk factor, and strongly indicate that EBV is the leading cause of MS.

According to lead investigator Alberto Ascherio “the bottom line is almost: if you’re not infected with EBV, you don’t get MS. It’s rare to get such black-and-white results”.

By way of adding some context, the original studies into the relationship between cigarette smoking and lung cancer showed a 25-fold increased risk in those who smoked more than 25 cigarettes daily. The significance of these new findings can hardly be overstated.

I realise that some of you might now be thinking, “well so what, I already have MS”. There is also currently no vaccination to prevent EBV infection, nor an anti-viral treatment to treat or clear it. That’s the bad news.

But if an EBV vaccine could be developed and given to children before they are exposed to the virus, then their lifetime risk of developing MS could be almost zero. As the father of 2 young children, I would do anything to give them that level of protection from this condition. In a very exciting first step, Moderna, the manufacturer of one of the COVID-19 mRNA vaccines, has just launched a Phase 1 trial into just such a EBV vaccine.

For those of us already living with MS, there is also real reason for hope.  B-cell depleting treatments (Ocrelizumab, Kesimpta) are already available, and have been shown to be highly effective at treating relapsing-remitting MS and some forms of progressive disease. If treatments could be developed to selectively target EBV-infected B cells, they may prove even more effective. Researchers are even whispering of the holy grail, “a cure for MS”.

Whilst I recognise that none of this is going to happen overnight, I also know we desperately need some good news to bring in the New Year. Perhaps this is it. 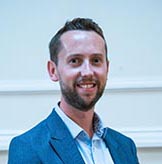 Dr Jonathan White is a practicing medical doctor who assists OMS as a medical advisor and event facilitator. Jonathan was diagnosed with RRMS in October 2015, and has been following the OMS Recovery Program ever since.

Thank you gor this insight. I have known the connection with EBV for 5 years now, I'm glad its finally being acknowledged. I do wish if Moderna makes a vaccine for EBV, it is not a mrna strand.

I'm with you, Erica C. Since one of the most common side effects of the MRNA vaccines is Epstein Barr infection, it is possible that we could see a dramatic increase in MS in the next decade. I certainly hope not.

[~SusanM.]
I'm trying to find more on this but all i can find is, that moderna is entering phase 1 trials of their mrna vaccine against epstein barr. Could tou please provide me with a source of your information? Thank you.

When I was 18 years old I went on a lads holiday to Ibiza and soon after returning I had glandular fever and felt the unique fatigue the same as what I experienced with MS when diagnosed in my late 30’s.

And what if my children already had ebv, even without symptoms? How can science help them in reducing their risk?

There are single case studies that have "shown" that the HIV drug zidovudine has helped MS patients as it is effective against herpes viruses and EBV is a herpes-type virus. Why no studies?

I was so sick with ebv Mononucleosis when I was 17-18 after that I ignored other MS signs till I had a grand mal seizure like God was saying “Hey dumba$$ I gave you multiple signs what this was, WHY didn’t you listen”

It sounds extremely exciting news. I have had Relapse remitting MS for about 22 years. I'm sure as a sixteen year old my GP told me I had glandular fever, i also developed hay fever. It was a fairly stressful time for me because I had just started an apprenticeship as car mechanic. Coming into contact with lots of oils, brake dust and other toxic hazards.

it would be so good if any new treatment became available.

Hi Trudi, we have information from the program on prevention in family members which might help: https://overcomingms.org/recovery-program/prevention-family-members

Never had EBV myself nor did I test positive for the antibodies at the time of my diagnosis. I did, however, get extremely sick after a trip where I was inundated by bug bites in South Carolina. Dizziness and horrid fatigue for a month with a high lymphocyte count. So while I am excited about this EBV news, I feel I am the unicorn.

So grateful for these new and impressive research developments.

The Blood-Brain Barrier and demyelination: the missing link in MS?

There are so many clues in the medical literature suggesting that a break in the tight barrier around the brain, the blood-brain-barrier (BBB), can allow the pathological process of multiple sclerosis to start
Dislike 0
0 Likes
0