In mid-September 2016, we were delighted that Ian and Simon made an attempt on the world record for crossing Loch Ness, in the name of both OMS and the Cystic Fibrosis Trust.

In an interview with OMS writer Emma Hammond, they said that come the day they’d like a calm lake, a tail wind, a temperature of around 18 degrees, and no monsters. A quick weather check by us at the time revealed they were bang on target for the temperature, and as far as we were aware, Nessie was lying low. Read Emma’s interview below, which was conducted before the world record attempt, to find out more about OMS’ Guinness World Record hopefuls!

Q & A: GUINNESS WORLD RECORD HOPEFULS Ian Barnard, 42, from Berkhamsted in Hertfordshire, and Simon Walley, 42, from Hythe in Hampshire, are raising money for charities, Overcoming Multiple Sclerosis and the Cystic Fibrosis Trust, having had family and friends affected by the conditions.

Dad-of-two, Mr Barnard, will be paddling 20.59 miles across Loch Ness in a two-man Kayak with fellow paddler, Mr Walley, whose son has Cystic Fibrosis, on 17 September. He said, "We’ve never been ones to turn down a challenge, even though friends and family think we’re barking mad. After completing the Devizes to Westminster 125-mile Canoe Marathon in 2014, nonstop, in a time of just over 24.5 hours, we decided to set our sights on something higher: breaking a world record."

The current record for this crossing, which starts at Loch Ness, Fort Augustus and finishes at Loch Ness, Dores, stands at four hours, 43 minutes and 43 seconds. It is held by two fit young men from the cystic fybrois community who do not have cystic fibrosis themselves.

Mr Walley said, "We looked at their time, and compared this to our average pace for the Devises to Westminster and thought it was a very doable challenge. But it will depend largely on the weather – and Scotland isn’t known for its calm and dry weather!"

How long have you known each other? Where did you meet? "We met at Mrs Murphy’s Nursery school in Hythe, Southampton, over a sandpit when we were three years old!"

When did you start kayaking? "We were in the Cubs together and then moved up to Sea Scouts when we were 12 years old. This was probably the first time we got into a kayak."

What do you enjoy about it? "We used to paddle and sail every Friday night and most weekends we had a large group of friends who also shared our love of water sports, so there was very much the social aspect as well as the exercise. There was also a huge sense of freedom, planning routes and setting of on adventures. In our late teens (when the oldest of our group had got a driving licence) we used to head to Boscome pier near Bournemouth and go surf kayaking most weekends. Our most scary trip was trying to get out through the waves the day after the 1987 Hurricane had passed through (we didn’t get very far!)"

Have you always taken part in competitions? What made you start? "We first started competing in the Solent Scout Regatta. We raced in single and double kayaks bringing home first place in the long distance race one year. I suppose this was where it all started! We first completed the Devizes to Westminster in 1991. We had to enter in the junior category which means the 125 mile race is run over four days with overnight stops. There are numerous pre-races we entered to get the hang of it, as well and the national Haslar races which take place all over the country."

You completed the Devizes to Westminster 125-mile Canoe Marathon in 2014, nonstop, in a time of just over 24.5 hours. What prompted you to compete in this race? "When we competed as juniors we thought the race was really hard and couldn’t understand how people could complete it non-stop! We talked about repeating the race in the senior category many many times and it took another 24 years for us to get it together and enter in the seniors (ie non-stop) in the year we both turned 40!"

Where did you get the inspiration from to attempt this Guinness World Record of crossing Loch Ness in a two-man kayak? "We are on the Cystic Fibrosis Trusts’ mailing list for all the other amazing fund raising activities that people are doing, and the kayak crossing of Loch Ness came up a year or two ago. We didn’t think much more about it until after the Devizes to Westminster, but we had trained so hard and got to a high level of fitness that we wanted to try and maintain, so picked this as our next challenge."

What type of training are you doing for a challenge like this? "We are doing general fitness work – swimming and gym workouts two to three times a week – and we’re trying to get in the boat one a week but it’s a bit of a challenge because one of us is based in Berkhamsted and the other in Southampton. We meet at Windsor and paddle up and down the Thames. Unfortunately, though, there is no substitute for time in the boat."

What emotions are running through your head at the moment before the event? "We’re really excited and a little apprehensive. We are confident we can complete the distance; it’s really about setting the bar as high as we can for the next person to challenge the record!" 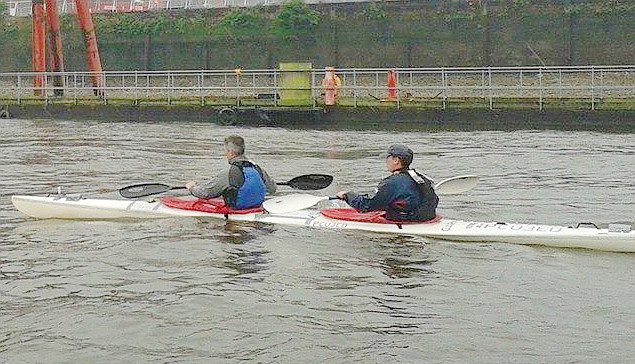 What are you hoping for on the day of the 17th when you are due to take part in the challenge? (ie weather conditions, conditions of the lake etc) "A flat calm lake, preferably a tail wind and about a temperature of around 18 degrees, which is the perfect temperature for long-distance paddling. Oh and no monsters!"

Are you concerned about anything? "The evidence required to submit to The Guinness Book of Records is fairly extensive. There is a lot to coordinate and if we miss one thing out the attempt will be invalid. It’s a long way to go to not get the record due to a dead battery in a camera or stop watch. Oh and monsters!"

Describe the practicalities of the adventure "We will drive up with the boat on the Thursday and our families and support team will fly up on the Friday. We have two boats. One is a sprint boat, nicknamed ‘The angry wasp’, which we regularly fall out of but is very fast. The other, 'The white whale', is also fast and it’s the boat we completed the Devises to Westminster race in.

We will be using the White Whale for the record attempt. "It depends on the weather, but we will probably set off early in the morning before the wind picks up. We will be burning about 1200 calories during the attempt, so need to have a good breakfast and probably something en route (tricky as you can’t use your hands!) We have drinks bottles with straws which we wear around our necks and are ‘hands free’.

We will also have energy gels. "We will be wearing buoyancy aids, and our support crew will be able to see us all the time, so if we do get into difficulty they can raise the alarm. The boat has in-built buoyancy so if we fall out we will have to do the swim of shame back to the bank!"

Who will be supporting you? "Both our families and our parents are heading up. We also have some really close friends who supported up on the Devises to Westminster who are also helping up out with Witness statements and time keeping."

How do you think you’ll feel if you achieve a Guinness World Record? "We are really doing this partly for our own satisfaction, but mainly to provide inspiration to the next generation. Hopefully our kids and their friends will be inspired to think anything is possible… which it is!"

How can people sponsor you? ‘Please visit our Just Giving page!'