Hiking the Inca trail In Peru with multiple sclerosis

Anja, who was diagnosed with RRMS in 2012, recently hiked the Inca Trail in Peru! This is her story of an inspirational achievement.

Anja has been a keen OMSer since being diagnosed with RRMS in 2012. Initially fatigue had a big impact on her life. She recently wrote about how exercise in particular has helped her overcome RRMS. She completed the Inca Trail trek in Peru in March and shares her experience with us below. 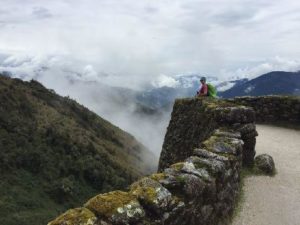 The path is the destination

They say 'the path is the destination' and I couldn’t agree more after hiking the classic four-day Inca Trail in Peru last month. It ended at one of the 'New Seven Wonders of the World', the picturesque Machu Picchu. After my experience at Mont Blanc in July 2017 I thought I had an idea what to expect when hiking in the mountains, but it turned out I didn’t.

The Inca Trail is about 43 km (26 miles) long, its highest point is 4215 m (13,828 ft) and hiking it has been on my bucket list for a long time. It seems as if out of the 43 km route, only three kilometers are on an actual path. The other 40 were very, very steep stairs and you definitely feel the high altitude.

A pounding heart and shortness of breath is a constant reminder. I felt like a true adventurer the moment I got off the bus at KM82, the official start point for the classic Inca Trail, where we met our six porters, the cook, our guide and fellow team members.

With only four members in total (I was the only female) we must have been one of the smallest teams on the trail. Everything needs to be carried along for the hike, from camping equipment to food and water, as we slept in tents along the way. I’m thankful for the support of our great porter team that carried most of it. In the end I still hiked with a 7-9 kg backpack although I only carried my really important things.

I can tell you though, after a few hours I envied hikers who had nothing but a tiny day-pack or a bottle of water on them. See also: OMS challenges including hikes along Hadrian’s Wall and through The Himalayas The Andes are breathtaking, so lush and green, an unknown sight if you’re used to the Alps that have nothing but rock above 1750 m (5,700 ft).

In Peru you've got the cloud forest and dense vegetation all the way up. March is the end of the rainy season and that has one huge advantage - fewer tourists and hikers on the trail. Everything is in bloom and there are waterfalls everywhere - I didn’t know where to look first. Well, actually I did know as you need to watch the path very closely. Not only because of the uneven steps and rocks - sometimes it just plummets down hundreds of feet right next to the path and there are no guard rails in place. 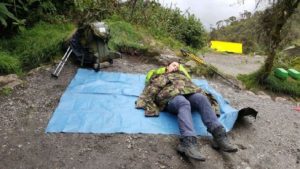 A physical trial and a half

Hiking the Inca Trail is very physical, actually even a bit more than I expected, but our camp chef took great care of us by cooking delicious three-course vegetarian meals both for lunch and dinner as well as some nice treats for our daily “Happy Hour” - all prepared on one tiny camping stove!

According to the itinerary, day two was marked as challenging, only 12 km long but crossing the infamous Abra Warmiwañusqa, aka Dead Woman’s Pass. Yep, the name says it all, no surprises here. The pass is 4215 m (13,828 ft) high but luckily it didn’t have a lot of stairs, which was something.

I noticed fellow hikers had to stop or take a break left and right along the trail because of high altitude disease and with every step I gained more respect for this pass and its challenge. Luckily, we took a quick break at the final rest place with a few stands where locals sold drinks and sweets.

The next possibility wouldn’t be until reaching Machu Picchu two days later. I must admit that I allowed myself a bottle of Coke and small bag of Skittles, that’s how exhausted I felt already at this point.

My body needed some quick energy to make it up the pass - the temperature, light rain, humidity and height had taken a toll on me, just like on everybody else.

I was thrilled when we made it to the top - also because I knew that the next two hours were downhill until we would reach the camp for a well-deserved lunch break. I honestly felt exhausted when we arrived at the camp after eight hours of hiking/climbing stairs and had no idea it turned out to be only a quick break.

As we were such a small and rather fast team, we decided to skip this campsite for the night and hike on over yet another pass, Abra Runkurakay (3860 m) for an additional 3-4 hours, resulting in an 11 hour hiking day. I

’ll never forget the faces of the other teams watching us leave the camp in the afternoon, in complete disbelief. On the positive side, the trail was completely empty, no soul in sight. Once more I was reminded that it’s a fine line between challenging and pushing, especially when you have multiple sclerosis.

Pushing myself to the limit 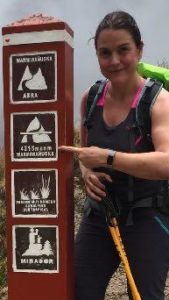 I definitely pushed way over my limit that day. I think it’s important to challenge yourself and see how far you can push and slowly move that line further and further away, otherwise there’s no progress. Of course I trained for the trail but the situation on that day was really borderline stupid and I should have just said that I felt exhausted and didn’t want to skip the camp and move on. Well, I didn’t and had to live with the consequences for the next hours... and it was a real struggle. The Dead Woman’s Pass was, in my opinion, easy compared to the next one, Abra Runkurakay. Whenever the stairs - not path- turned around the mountain, the pass seemed even further away. There was no way out, so I had to go on, pushing myself really hard. But, like so often in life, we get positively surprised when not giving up.

The ruins along the way made up for it, as well as the forest that is so dense it looks like a green wall on both sites of the path. It was already dark when we approached the camp and you can imagine how relieved I was. After this struggle the rest of the trail was simply magical. We randomly met llamas, watched hummingbirds and took dozens of photos as we passed even more ruins on day three.

And, of course we climbed more stairs, it just never stopped. On day four, the final day, we had to get up at 2 AM to secure a spot at the front of the queue for the last check point to be able to go through the gate as soon as they opened at 5:30 AM. Luckily we were the second team and I glued myself to our guide's feet for this last bit of the hike.

I decided to push one last time as I knew it’d be over soon. After only 52 minutes, instead of two hours, I was the fifth person that day to enter the site via the infamous Sun Gate, allowing us a breathtaking view on the Machu Picchu area and it truly is a wonder of this world! This sight and sense of accomplishment were definitely worth the struggle and exhaustion... but no extreme stair climbing for me in the near future.

Are you interested in getting involved in a hiking challenge? See our events page for information about our treks.

Hello, I too am an avid hiker and explorer. Was diagnosed March 2019. Have been worried about doing large scale trips like this. All my lesions are in my brain. No loss of strength anywhere, but my balance and coordination go to hell when I push myself too hard. How did you deal with the fatigue and Uhthoff's Phenomenon when you were on the trail?