Due to an unexpected relapse, Rachel found herself confined to my flat for a few days, drugged up to the eyeballs on high-dose steroids.

This wasn’t where I expected to be at the beginning of February 2017. Nor was this the blog post I had intended to write. But, thanks to an unexpected relapse, I find myself confined to my flat for a few days, drugged up to the eyeballs on high-dose steroids.

Pacing oneself in party season

How have I found myself here? Well that’s a question I have been asking myself since the beginning of the week. It had all been going so well. I had a full ten days’ holiday over Christmas (my first long festive break in over twelve years).

I had also been seeing a personal trainer at the gym for a couple of months, and I really thought things were on the up. But, returning to work after Christmas, my leg started playing up. It seemed stiff, and my knee was locking with alarming regularity.

It picked up again for a few weeks, before the foot-drop kicked in and I found myself dragging my left leg around like a spare part. I don’t have time for this! Not now. I turn 40 at the end of the month and have got my entire family descending on London for the knees-up of the decade. (That’s both knees; not just the one that can be bothered to join in.) Having suffered two previous mobility relapses – both before OMS – I recognised that I needed to get on top of this quickly. I rang the MS nurses, who swiftly faxed a prescription over to my GP for a five-day course of steroids. So here I am. Day fives’s tablets ingested. Trying to prevent my body from tackling all the little jobs around the flat that my brain now thinks it can achieve (You are not Lance Armstrong. Chill out). Which brings me back to the question – Why? I compiled a list of possible reasons:

Who knows exactly what caused my relapse. Probably a combination of all of the above. What I do know is that, whilst frustrating, this relapse has given me some time to have a good re-evaluation of my OMS journey.

'Who knows exactly what caused my relapse. Probably a combination of all of the above. What I do know is that, whilst frustrating, this relapse has given me some time to have a good re-evaluation of my OMS journey.'

I have been following the OMS program for almost four years now, and have been taking Copaxone for three, following a significant relapse that has left me on crutches for the past four years.

After taking Copaxone for a year, my Neurologist expressed surprise that I hadn’t relapsed in that time. He doesn’t give any credit to OMS, sadly, but what I know is this – since starting OMS, I went almost two and a half years without relapsing. And when my optic neuritis did flare up (December 2015), it was mild and short lived.

My current relapse – although frustrating – has not laid me up as past mobility relapses have. I can stand and cook for short periods. I can wash-up. After my final dose of steroids, I was able to climb into the bath. However, the more time I spend thinking about my OMS lifestyle, the more I realise that I have not been as dedicated as I convinced myself that I was. 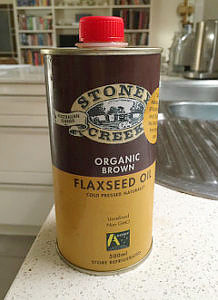 I tell myself I’m dedicated to OMS, but I recognise that I have been allowing some bad habits to creep in. My vegetable intake has perhaps not been as good as it could have. Flax oil has been poor. I have occasionally lapsed and allowed myself a ‘not-completely-OMS-compliant’ meal out ‘once in a while’.

I am also an ex-chocoholic and yes, I have succumbed on occasion. Not a full box of chocolates – but even a small square can lie in wait, ready to pounce when the time is most certainly not right.

These tiny indiscretions have mounted up and now they have struck. Looking on the bright side, I am more determined now to get back on track.

Maybe this was the reminder I needed to get me back in the driving seat. All components of the OMS program matter. What’s the point of me shelling out money for one-on-one training sessions if I am not doing everything I can? Do whatever it takes. OK – so here’s the tough talk. I’ve given it to myself, but I figure you should learn from my mistakes.

I have been cheating. Cheating: (verb) act dishonestly or unfairly in order to gain advantage. ‘Cheating’ is something that is often mentioned between OMSers – “a cheat treat”, “I only had three chips”, “once in a while won’t hurt”. The only person you are cheating is YOU.

It’s you against your MS, and cheating at OMS most certainly won’t give you an advantage.  I’ve learned the hard way; don’t be like me. I hope my story will help, or inspire someone else. Perhaps you are a newbie whose MS symptoms are mild? Don’t become complacent.

Maybe, like me, your MS seems a little more aggressive? Don’t become complacent. OMS works – for sure – but only if you dedicate yourself entirely. Only half-committing is like signing up for the gym, buying all the kit, and talking about your intentions – but it’s pointless if you’re not actually doing any exercise.

So, I choose to be thankful for this relapse. I am grateful that I have had some time to re-think and evaluate. To recognise that I have become complacent and slipped up. I am jumping back in, feet first, straight into the flax oil. As they say, life begins at 40!