How we made the Overcoming Multiple Sclerosis cookbook

How we made the Overcoming Multiple Sclerosis cookbook

Nearly three years have passed since I first had the idea of working on an OMS-friendly cookbook. I can’t believe how much time it took to complete the project.

Nearly three years have passed since I first had the idea of working on an OMS-friendly cookbook. I can’t believe how much time it took to complete the project, and how many hiccups we encountered and overcame during the production schedule.

First we had to figure out how to work on the cookbook over three time zones. I would catch Jack during the evening in Zurich perhaps sipping a wine, and Elizabeth, our publisher at Allen & Unwin in Sydney, already in a new day and waking up to coffee, while I was sitting at my computer in New York at midday contemplating what to eat for lunch (this was before my move to Los Angeles).

But Jack and I quickly figured out how to coordinate our schedule and work on the project in a fruitful way. We began with weekly Skype calls between Jack and me.

We started with the introduction and a list of recipe categories. The next phase was to review each of the recipes submitted by OMSers from around the world. I cooked everything that appears in the book (and some of the recipes which didn’t), then we discussed the outcome.

I think Jack and I learned quite a bit during the process. For my part, I learned a lot about cooking methods (for example, how to perfectly ‘dry-fry’ onions à la méthode McNulty) and balancing my omega 3:6 ratio. Jack became really interested in testing temperatures in baking and sautéing to ensure everything appearing in the cookbook preserved the integrity of any fat used. 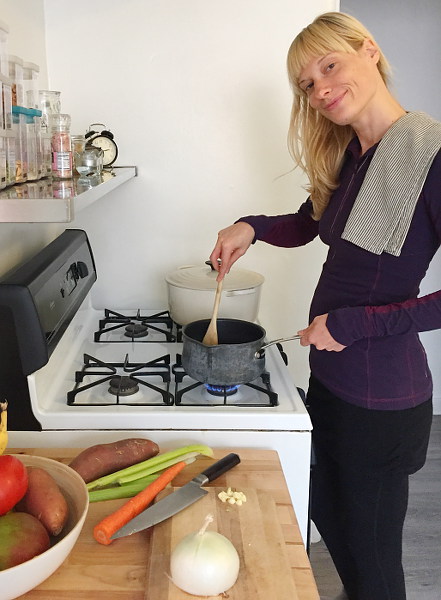 Ironing out the wrinkles

We were often reminded of the common misunderstandings within the community concerning baking temperatures, how to properly fry without oil or including coconut in our diet.

Obviously we wanted to make sure all the recipes we selected meet the criteria of the OMS protocol. As we continued our journey, we realized we had to reject quite a few nice recipes that were like others already submitted or fit into a category that was filled (So many recipes for sweets…

I think the OMS community loves a good dessert!) We also had to come up with some new recipes to fill gaps in the book (the OMS community doesn’t seem to be quite so keen on tofu/tempeh dishes or vegetable side dishes).

Many a laugh along the way

Jack and I had a lot of good laughs on Skype. Sometimes we just celebrated our own OMS successes. And on a couple of occasions, we were interrupted by our spouses popping up in the background or listening in on our not-so-private conversations. We had a good chuckle discussing my beloved recipe for “energy bites” which was originally called “energy balls” – Jack felt my original title didn’t translate too well from German to English!

A sense of belonging

Most importantly, we both felt we were firmly on track with the diet and entire lifestyle. It reminded us how valuable it was to speak with another OMSer on a regular basis and share stories with someone else who is going through the same thing.

This cookbook project taught us how important it is to belong to the OMS community. As our final cookbook call concluded, I felt a sense of completion. We each held an advance copy of the book and flipped through the pages.

No matter what recipe we randomly landed on, we knew a story about that recipe. We enjoyed working on this project immensely, and we hope you will enjoy trying out the recipes!

Let food be thy medicine

“Let food be thy medicine, and let medicine be thy food”. Little did I realize the fullness of this statement I was examining during my studies in 2012.
Dislike 0
0
0
Login Register