I find myself sitting in the disabled section as I prepare for the headline act of rock, metal festival download. As I sit, I think about how short life is. I find myself sitting in the disabled section as I prepare for the headline act of rock, metal festival Download. As I sit there, I think about how short life is. My parents had told me this on a number of occasions, nevertheless, it hit me hard as I sheltered myself the best I could from the summer rain.

Six weeks earlier I had been admitted to hospital, experiencing paralysis from the stomach down. The feeling of disconnection from reality began the moment my scan results were given to me by my doctor. "You have something in your brain." To find out what it was, would require me to undergo a series of tests over the next few months.

A myriad of outcomes

As I sat in the rain, only a few weeks after being released from hospital, I observed others around me, wondering if anyone there was experiencing what I was or had what it is I had, I began thinking about the endless cycle of outcomes playing over and over in my mind since my scan result.

Was I going to wake up the next morning a vegetable? How long do I have left to live? How long would I be able to enjoy the simple but most beautiful pleasures of life?

As the band began performing I felt both happiness and sorrow. I could not join my friends in the hellacious mosh pits that circled before me but I was there, watching one of the greatest live acts of modern times.

Being in the disabled section allowed me to have a great view with a sincere love for sound of trademark British rain.

'Prior to my diagnosis I was more interested, as many young adults are, in superficial health, which meant looking good on the outside with no focus on what was going on inside my body.'

The months that followed consisted of living in a way that allowed me to appreciate all the little things in life that were so often overlooked. The theory of working hard towards a career that would bring self-acceptance and a high income went out the window. I began questioning everything more deeply and quickly came to the realization that most of what I, and society, considered as important had very little relevance to what constituted happiness. 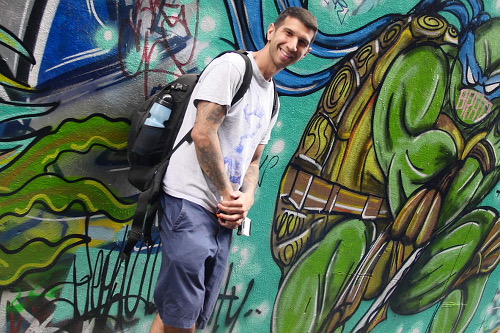 Books slowly became a close companion as I tried to unlearn the mentality of Western civilization and move towards a more natural, harmonious way of living a healthy lifestyle.

During this period I discovered Eastern practices such as acupuncture and particularly Ayurvedic medicine, which helped relieve a number of symptoms and felt like it was treating the root of the problem, not just putting a plaster over it like western medicine often does.

I learned more about the mind/body connection, alternative medicine, nutrition and the environment through my reading and short courses. All of which came to the same conclusion; animal products had no place in my diet, which felt very strange.

Prior to my diagnosis I was more interested, as many young adults are, in superficial health, which meant looking good on the outside with no focus on what was going on inside my body.

All my reading led me to quickly realize that nutrition played a huge role in health and what I had been consuming was in fact not truly healthy.

For the next few months I contemplated becoming a vegetarian but loved the taste of meat, I was also worried about the affects it may have on my health, as I had always thought it was a necessary part of a healthy diet.

I quickly learned that most of my, and the general public's, knowledge of nutrition, particularly meat, was warped. It was surprising to the extent the meat industry had gone to hide information and provide misinformation.

It wasn't until I watched a video about how farmed animals are treated that I decided to give up meat altogether. Mankind's connection with nature had been lost and in turn was having a negative affect in many ways, including health. When my diagnosis finally came I could not feel anything except relief. I had waited seven months to find out what was causing all these bizarre feelings in my body, months of worry, visualizing the worst case scenario. Multiple Sclerosis, not so bad. I had refrained from searching any of my symptoms online as I didn't want to cause any more unnecessary panic. However the evening of my diagnosis I lay in bed and decided to search Multiple Sclerosis and it scared the sh#t out of me (not literally). I only told a select, few, close friends and family. I didn't want to be looked at or treated differently. I was paranoid that someone was going to comment about how I walked or that my speech was slurring. It turned out that people knew less about multiple sclerosis than I initially had. 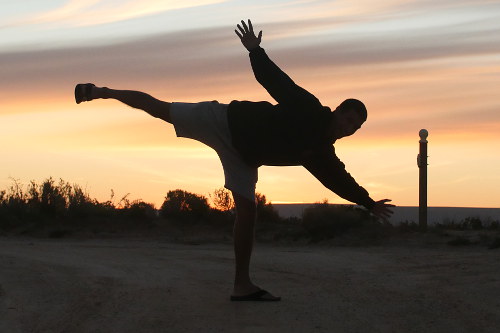 My road to recovery

When I first got my diagnosis I could not walk without symptoms, then as time went on it was only noticeable when I ran.

Now I play soccer, basketball and cycle everyday with rarely any symptoms at all. This is thanks to people like Dr. George Jelinek and Dr. Roy Swank who share their knowledge and provide light in a dimly lit tunnel, they show how you can help yourself without medication.

I now strongly believe that nutrition, exercise and meditation is the most important medicine of all. There's no knowing what the future will bring, in truth all that matters is the present.

I now see my condition in a totally different light. It's changed the way I live my life, before my diagnosis I had worked myself into the ground, I was constantly on the go, trying to achieve enough to justify myself as 'successful'. Now I take a lot more time to focus on well-being, compassion and living a less selfish life. My diagnosis was and is essential to my journey. I now feel a better understanding of why I am here and how to live in balance.