My first half marathon

Karen Law has been running ever since she attended an OMS Retreat seven years ago. She recently completed her first half marathon - read what she has to say about her experience.

On the back of my runner’s number for the Sunshine Coast half marathon was a space to write some emergency contact information. Name, address, phone number, the usual stuff. Then came a question I had to stop and think about: previous medical conditions. After a brief pause, I picked up my pen and wrote ‘Recovered from Multiple Sclerosis’.

It was almost seven years to the day since I’d attended an Overcoming MS retreat at the Yarra Valley led by George Jelinek.

I’d been diagnosed a few months earlier and was having a pretty rough time; numbness from the waist down, sensory issues in my hands and fingers, electric shock feelings.

That week changed my life and set me on a path to wellness, although it was a long and winding path with many diversions and benches to rest on along the way. And even a few wrong turns.

But ultimately, like a great many others, I stabilized and became well by following the four main branches of the Recovery Program: a plant-based diet, vitamin D, meditation and…exercise.

Adding exercise into the mix

This last one got implemented when I got back from the retreat. I had always been a superficially active person, someone who looked like they must exercise a lot but actually didn’t. I was an expert at the five meter sprint whenever I needed to grab something from the car, and that was about it.

Prior to MS I would have found it fairly easy to start an exercise campaign - maybe join a sports team, go to the gym - but now with a host of symptoms it was much harder. And much more important. 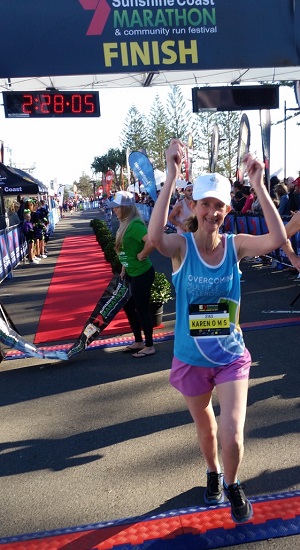 My first ‘run’ was done in thongs (flip flops) because I didn’t own a pair of running shoes. In fact I hardly wore shoes at all because at that time my feet felt like they’d been stuffed with sawdust.

You know when you’re trying on a new pair of shoes and the screwed up paper has been left in the toes? That’s how it felt all the time.

I was getting electric shock symptoms too when I ran more than a few meters. But over time those issues resolved; I bought some running shoes, and the sawdust feeling and electric shocks disappeared.

One kilometer became two kilometers, then five, then ten… until after several years I started to wonder if I could run a half marathon.

So on Sunday August 20th 2017 I lined up with my husband David (and hundreds of other runners) to find out if I could. As an athlete I subscribe to the Ted Jackson style of training; prepare just enough to succeed, but save your main effort for the race itself.

The longest distance I’d ever run in one go was 12 kilometers, and a half marathon was almost double that distance. But as the love, support and donations to our JustGiving page flowed in, I hoped that everyone’s belief in me, and my belief in myself, would carry me through.

The first five or six kilometers were quite easy. That is a distance I regularly run, and the half marathon course was quite flat compared to the hills of my home town.

Then, with a quarter of the race under my belt, it was just a matter of keeping going. At around 14 kms (two thirds of the way through) my right hip started to hurt. Just a bit to begin with, but by 17 kms it was becoming increasingly painful.

By then, there was no way in the world I was going to stop. Not even when both my knees became painful too, and my left big toe felt like it was going to explode inside my shoe.

David was there by my side the whole way, encouraging me, keeping his eye on the time. When it felt like both my legs were on fire and every step was agony, he encouraged me to count in time with my steps.

He even started counting for me, which was annoying because I know how to count. I was in so much pain I shouted at him, quite angrily.

And then it happened. The finish line came into view, and I knew I was going to make it. Crowds of people were lining the track, and I could hear an excited rumble turning into a roar on all sides.

Surely all this noise wasn't for us? Well, no, of course not! It was for the leader of the full marathon who ran past us 100 metres from the finish line and went through the ribbon to claim his victory.

We stumbled over the line and sobbed, in relief, in wonder, in gratitude for what we had achieved. The time on the clock said 2 hours and 28 minutes, and despite the fact that marathon winner Clay Dawson had run twice the distance in that time, I don’t believe he could have felt any happier or any more satisfied than we did.

Karen Law is a musician, teacher and freelance writer. She grew up in England before moving to Australia with her husband David in 1995. They now live in Queensland with their three children.

Karen was diagnosed with MS during a series of relapses in early 2010. She discovered OMS soon afterwards, attended a retreat, and has seen her physical and emotional health stabilize and steadily improve since then.

Knowing how vital that lifeline of hope can be she is delighted to be part of the growing OMS movement and have the chance to encourage others on the road to wellness.

Karen leads a fulfilled and active life, enjoys running and co-wrote the book Recovering From Multiple Sclerosis: Real Life Stories of Hope and Inspiration, with Professor George Jelinek and has assisted with the OMS website and Facebook page.

"The post-MS version of myself realizes that regular movement is more important now than ever. And in order for exercise to be a regular part of my life, it needs to be enjoyable and sustainable."
Dislike 0
0 Likes
1

Incorporating exercise in to day-to-day life

Mum of two Ineke shares how she keeps moving, even with a busy lifestyle and MS symptoms. "I’ve never been a big sports fan but I do know I need (and enjoy!) exercise, so I found all these little ways to incorporate it in my day."
Dislike 0
1 Likes
2

"My mind is occupied when I’m moving."

Susan shares why moving her body regularly is so important to her, mentally and physically.
Dislike 0
1 Likes
0

Here is some advice for those with progressive MS and how best to exercise.
Dislike 0
0 Likes
2