Never work with children and animals. Or politicians in the midst of Brexit, Parliament suspensions and elections for that matter! | Overcoming MS Skip to main content Never work with children and animals. Or politicians in the midst of Brexit, Parliament suspensions and elections for that matter!

It was at the end of June when Gary McMahon, Linda Bloom, Tim Cobb and myself met with Stephen Lloyd MP at Portcullis House in Westminster to discuss hosting an event at the House of Commons enabling Overcoming MS raise its public profile.

We debated the timing - with the Tory leadership contest in full swing, Brexit and a general election looming - and agreed to just get on with it….

We quickly confirmed a date in October when key people were available, booked our preferred venue, Strangers Dining Room - an accessible, prestigious location right in the heart of the Parliament building, accessed via the central lobby.

Back at the OMS Thame office, I arranged some internal meetings where we mooted potential campaign ideas, themes, target audiences, costs and resources. We also debated a larger, wider campaign to incorporate international audiences, which we sensibly decided was biting off more than we could chew - this time anyway!

The summer holidays arrived all too soon and things started to slow down. My children deserved some attention, we holidayed in sunny Wales and soon enough it was September and back to school.

By the time the OMS team was back fully functioning we had just over a month to pull the event together. Online invitations were created (trying to save print costs and for environmental reasons), guest lists were agreed and MailChimp was put into action.

We were now committed and the countdown had begun! My role within OMS is PR and for this event my main job was to pull everything together and manage all the organisation. Gary’s remit had been clear - it’s your project to deliver and while I’m happy to get involved when you need me, you need to be leading this. No pressure!

Now while I have extensive experience of PR I am always happy to have help from digital experts. Cue Lucy and Sophie, the OMS digital dream team.

We reminded ourselves of the main focus of the event -  to raise awareness of the work of the charity to new audiences - to key media, political and health influencers. And to introduce them to our wonderful OMS community - not just the management team but also to our amazing OMSers and Ambassadors from across the UK.

Everyday I was tracking who had opened and replied to the invitation. And chasing those who had not. Numbers steadily rose.

Meanwhile Brexit was bubbling along - Parliament suspensions, extensions, deals and political careers dominated the news. Who knew what would happen on Tuesday 15th - there was every chance a general election was called or another legal challenge would be launched. Meanwhile we had paid the venue deposit, ordered the AV equipment and arranged an OMS-friendly menu. One thing we knew - our event was going to happen!

'Let’s launch our new promotional video on the same day!’  Yeah, let’s create more work we all shouted. So indeed we got on with finalising our new Overcoming MS awareness video. We fine-tuned edits and messaging.

'I know - let’s bring forward the launch of our press resources section on the OMS website.’ Yeah, let’s put ourselves under huge pressure to get all the materials ready for the same day. So indeed we got on with the weighty task of writing tens of thousands of carefully chosen words. I had the absolute pleasure of interviewing some of our brilliant Overcoming MS champions and writing their case studies. (One of my favourite parts of the job). Lucy and Sophie also helped craft more words - MS facts, terminologies, factsheets, web pages etc

We mulled over language for Linda and Gary’s speeches. We worked with Stephen Lloyd’s office - during the unpredictable daily comings and goings in Westminster - to agree biographies, the running order, and press information. We worked with OMS trustee Caroline Clarke, (whose busy day job is Group Chief Executive of the Royal Free NHS Foundation Trust) and agreed her attendance and speech. We booked Jerri Jarmeh to help us captures photos on the day.

And then, Extinction Rebellion decided to mobilise for two weeks in London and around the world - DURING OUR EVENT! I’m not sure I’ve known a time with more turmoil in Westminster in my lifetime! The House of Commons event team advised us that it could take up to two hours to get through security. We couldn’t bring in branding that wouldn’t fit through the security scanner (unless we wanted to send a courier via Acton first).

The week before the event, I was obsessively listening to the news, monitoring travel disruptions and the security lock down around Westminster. I spent a day in the OMS office with the team who helped make up press packs. Up until Monday morning we were finalising written materials.

And then a calm descended, the video was made live, the press section was launched and on Tuesday 15 October we all travelled to London on a sunny Autumn day. The bells were ringing in Westminster Abbey when I arrived, as I passed a pogoing Boris Johnson lookalike outside the Cromwell Green visitor entrance. We sailed through security and sat waiting in central lobby to be allowed to set up in the room. We enjoyed some MP spotting - Jacob Rees-Mogg wafted by, Theresa May breezed past looking care-free in a stylish pale blue trouser suit. Television interviews were taking place.

The event itself was a bit like a wedding and the two hours disappeared in a flash! The event was well attended, ran smoothly and the OMS friendly food was delicious. Everyone commented on the excited buzz in the room, the anticipation that OMS was making a mark, was becoming more widely known and was finally getting the attention it deserved. Journalists from the BBC and Daily Mail chatted with groups of OMSers, MPs from York, Coventry, Wales and Sheffield attended as did a Baroness, Sir and Lord along with their advisors. Many had constituents or relatives whose lives had been touched by MS. 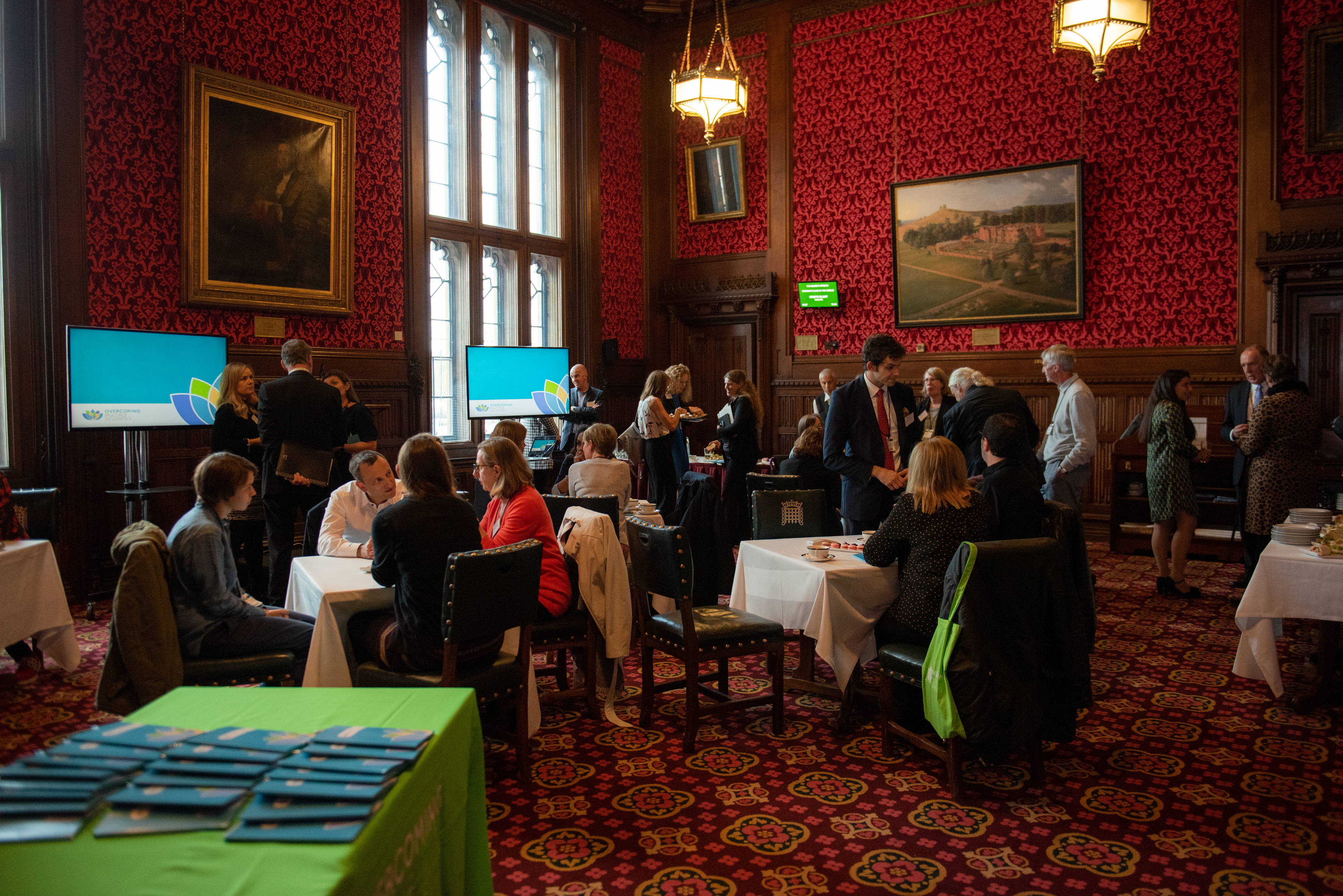 In terms of results, we achieved a huge increase in traffic to our website in the subsequent weeks. We secured press coverage in local Eastbourne and Brighton newspapers, the Daily Mirror, the BBC and national Charity publications.  Our social media posts were talked about, shared and were gathering traction and attention. Our new video was viewed over 10,000 times in a few days. All in all, we agreed it was so worth the time, money, sweat and tears. But we all needed the weekend off!

I now have a glow when I think about the event - of professional satisfaction, enjoyment and fantastic memories. It was truly one of the highlights of my work with OMS during the last year. Stephen Lloyd and his advisor Dean Sabri are an absolute delight to work with - caring and decent political people who genuinely care about issues. There will always be immense political issues in the UK and world - but people are still being diagnosed with MS everyday. Health is both personal and political and will always needs our attention and support. So yes, I would be lulled in to working with politicians, even during the next Brexit/leadership elections, well like Stephen anyway.