The interferon-beta (Betaferon/Betaseron, Rebif, Avonex) and glatiramer acetate (Copaxone) group of disease modifying drugs (DMDs) have been given a bit of a tough time by many in the global MS community.

These first generation DMDs were seen as being expensive, only modestly effective at reducing relapses and causing significant side effects.

Furthermore, the initial drug trials had significant flaws and there was no solid data to show that they could reduce disability accumulation or improve quality of life in the long term.

That said however, many people with MS (pwMS) have had very good results on these treatments, and credit their medication with helping to keep them well.

We must also remember that at the time they were introduced, there were no other medication options for MS.

What might have been forgotten in the mists of time is that these drugs almost didn’t get to the market at all.

In 2002, when they were introduced to the U.K. NHS, the 2-3 year trial data from the pharmaceutical companies didn’t yet show any long term benefit. Considering the costs of the drugs were so high, they were felt not to be cost-effective; in the shorter term at least.

They were only granted NICE approval on the basis that there would be ongoing research as to how well they performed in the long term.  A novel risk-sharing scheme (RSS) was established between the U.K. Department of Health, the pharmaceutical companies, professionals and patients.

As part of this RSS, a prospective study was carried out, consisting of over 5,000 pwMS (those with relapsing-remitting MS and relapsing secondary progressive MS) in the U.K. taking one of the interferon-betas or glatiramer acetate.

They were followed-up over 10 years to measure the long-term effects of the medications and compared to a database collected from 1980-1995 of almost 1,000 pwMS in Canada, who had received no MS treatment.

The primary interest of the study was the rate of disability worsening (as measured by the Expanded Disability Status Scale – EDSS) in the treated U.K. RSS group versus the untreated Canadian Control Group.

The key results of this very important and well conducted piece of work are, as ever, rather difficult to pull out from the very complicated statistical models.

Probably the most important finding was a relative reduction in the risk of progression of disability of around 23-24% in those receiving treatment (24-31% in the RRMS sub-group) over the 10 year follow-up period. 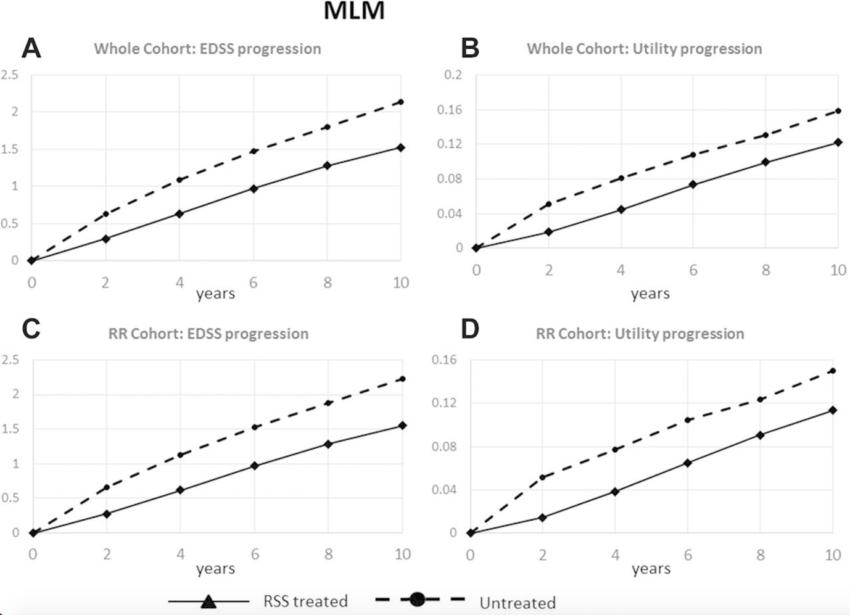 A secondary outcome was to determine if there was any cumulative benefit accrued over the 10 years of the study, specifically measured as the time taken to reach 6.0 on the EDSS (the point at which a person with MS requires a walking aid to walk 100m with or without resting).

This demonstrated that treatment with these early DMDs was associated with an average delay of 4 years in reaching this very relevant disability point (12.5 years in treatment group vs. 8.4 years in untreated group). 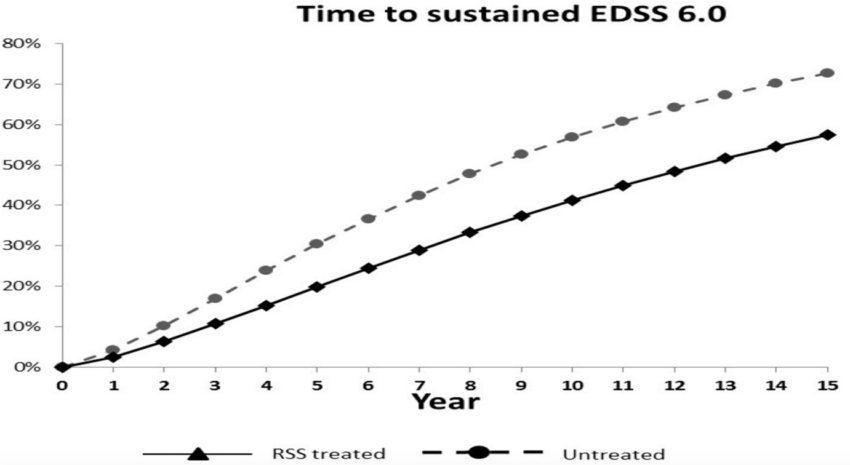 So this study demonstrated that those taking the first generation DMDs were reducing their risk of disability progression and significantly increasing the time taken to reach more significant levels of disability in the long term.

Interestingly, it appears that the most significant effects of the drugs are seen in the first 1-2 years, with a slightly smaller continuing effect, or perhaps a waning of overall effectiveness over time.

This would fit with the results of a large meta-analysis from 2017, showing reducing effectiveness of DMDs with increasing age.

It was also noted that the benefits appeared larger for those with RRMS rather than SPMS, those who started treatment earlier in their disease course, and for women.

One important positive to remember when interpreting these results is that this is one of the largest groups of people with MS in a study of this type.

The Canadian “no treatment” group is also the largest and most complete dataset in MS research.  The larger the number in a study, the less likely it is that any results occurred by chance.

The results were also analysed using 2 separate statistical models, to try and allow for any differences in the 2 populations that might impact on the validity of the results.

Another point of significance was that 80% of the people involved completed the 10 year follow-up period, comparable to the usual 20% drop-out rate often seen in 2 year studies.

These “drop-outs” were included in the analysis though, giving a more “real-world” performance of the medications, rather than simply noting the results of those who remained in the study, mostly because they were doing better on the treatment.

The study also included those who had already accrued some disability (median EDSS 3.5), again making it more representative of the average person with MS.

That said, no study is perfect, and there are some limitations worth mentioning.

Limitations to the study

Prospective observational studies, such as this, are not the gold-standard “double-blind, randomised-control trial”, but as we in OMS know all too well, sometimes an RCT is not achievable, and we should really aim for the highest level of evidence that can be obtained.

It would have been incredibly difficult and potentially unethical to conduct a trial where one group received no treatment for 10 years.

It would also have been technically superior to compare geographically similar cohorts. Whilst British Columbia is undoubtedly more ethnically diverse than the UK, we have very significant genetic similarities with our Canadian cousins.

MS predominantly occurs in European populations there, with previous evidence also showing that the natural course of MS is similar in both countries.

All of this leaves me not only a bit surprised that these drugs do appear effective in significantly slowing progression of the disease, but also wondering if the first generation DMDs can have these significant long-term benefits, then how much more effective are the second generation in the long-term?

Perhaps even more importantly, how would the side-effect free OMS Program compare over this longer term period in terms of quality of life and disease progression, or in combination with these drugs?

So far, we know from the STOP-MS study that we can expect an average 20% increase in overall quality of life 5 years after attending an OMS retreat and living a healthy lifestyle.  This is one of the many aspects of life with MS currently being investigated in part 2 of the HOLISM Study by the Neuroepidemiology Unit (NEU) at the University of Melbourne's School of Population and Global Health.