When the email popped into my inbox, advertising an Overcoming MS (OMS) retreat to be held in Austria led by Professor George Jelinek, I replied immediately.

Two years ago, it was a dark time in the days and sleepless nights after I received the results of an MRI test, which were suggestive of an MS diagnosis. One book changed all of this: Overcoming MS: An Evidence-Based guide to Recovery.
Knowing that recovery was possible and that numerous people had bucked the downward descent of this insidious diseases was an emancipating moment. An opportunity to thank the person responsible for restoring hope to our family, face-to-face, was something I could not pass by. In short, we owed him everything.

The retreat and its challenges

It has now been just over a week since I have returned from what can only be described as a life changing trip. The week long retreat was set In Propstei St. Gerold, a monastery in Austria close to the borders of Switzerland and Liechtenstein.

I had frequently heard that the OMS retreats are special experiences, but I wasn’t quite prepared for how impactful it would be.

Going into the retreat I was expecting a peaceful and relaxing break punctured with a sprinkling of informative lifestyle messages to further reinforce the messages laid out in Prof. Jelenik’s book. The reality was far from this.

Aside from the food, which I will wax lyrical on shortly, it was simply refreshing to be among c.40 like minded individuals from around the globe, who had all walked similar paths in having MS enter into their lives.

The way people were prepared to share their stories and be there to listen without judgement, provided both a source of support and rejuvenation.

Everything about the location was conducive to healing, from the serenity of the landscape, to the marvellous food on the table. Every meal and break time were completely OMS friendly and in parts harvested fresh from the garden vegetable patch.

For the first time in over two years, I did not have to anxiously scan menus checking whether something was OMS compliant. In this time and place we were all equal, a true inclusive dining experience.

A large part of the food input was provided by Jack and Silvia McNulty who also provided a session in cooking and a heap of recipes to try out at home. Their website laughinglemon.ch (twitter @laughinglemon) is a treasure trove of further meal ideas.

Dr Sandra Neate, George’s wife, was also there to help facilitate the course and amongst other things provided an excellent insight into diet and the impact of food in the body.

To my relief, Bonsoy milk (froths soooo well for cappuccinos and lattes!), Marks and Spencer’s veggie gummy sweets and Nakd bars where all confirmed as OMS compliant. :) Also facilitating were Paul and Maia Benson who led an exploration of meditation and the mind/body connection.

They both seemed to have been gifted with a surgeon’s precision for filleting into the body and extracting emotions and the scar tissue of tensions that had been buried within for years. Although being familiar with the OMS lifestyle before the retreat I found there was much to take away.

From a practical level, I had been having problems with my copaxone injections which I have been administering via an autoinject device. George showed me how to inject with just the syringe and although this method is harder for a needle-phob, it is actually less painful and leaves fewer lumps than the autoinject unit.

I’m still not at the stage where I can impale myself with the needle, but I have a loving wife who is more than happy to oblige! Positivity and reinforcement oozed around the group providing a plethora of healing energy and hopefully the bonds formed will be lasting ones.

The first day after returning from Austria, I went out for lunch with friends in a mainstream restaurant and was immediately reminded of what a luxury the retreat had been at not having to worry or navigate a menu finding the one dish that was compatible with a healing healthy lifestyle. 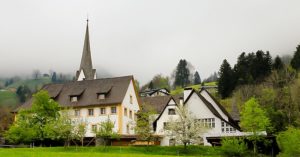 The hardest question to answer from friends and family on returning was “How was Austria?” The whole experience was so intense – perhaps requiring a holiday just to reflect on all that had happened!

I found it difficult to express in words how the trip was. One of George’s final comments was that when you return home it will be as though you have changed but the world you had left would be exactly the same… and so it was, nothing has changed… yet everything has changed.

Leaving the baggage behind

Sharing my experience, a friend offered an analogy which seemed to me quite fitting. It is in some ways comparable to a bereavement, where the world offers their sympathies at the time but then relatively quickly moves on leaving those close affected to shoulder the impact alone.

Whilst I had not suffered a loss on this retreat I felt I had left a lot of baggage behind and had returned with reaffirmed belief in the benefits of the OMS lifestyle and a new sense of belonging with the people I feel privileged to have spent the week with.

We are delighted to announce launch of this fund, set up to provide bursaries in Yianni's memory for young people diagnosed with MS. The scheme is intended to financially assist qualifying individuals under 35 in the UK to enable them to attend an OMS retreat.
Dislike 0
0 Likes
0

As part of our latest fundraising campaign, the Hampshire Circle have hosted their OMS Big Picnic, raising over £135.
Dislike 0
0 Likes
0

Our latest conference event took place on June 8th 2019 at the Assembly rooms in Edinburgh. The theme of the day was: Recovering from MS - wishful thinking or realistic optimism?
Dislike 0
0 Likes
0

39 participants joined us for an autumnal 5-day residential retreat in the beautiful Brecon Beacons region of Wales.
Dislike 0
0 Likes
0