Is OMS helpful in progressive forms of MS?

When discovering OMS, many wonder if the program offers any benefits for people with progressive MS. Professor George Jelinek discusses the evidence.
progressive MS

For a minority, perhaps around 15% of people with MS, the disease begins in a progressive form, with steady deterioration right from the outset, without relapses (primary progressive multiple sclerosis or PPMS).

The disease-modifying drugs (DMDs) for MS which number around a dozen licensed for use in many parts of the world, are mostly somewhat effective for RRMS, with one or two slightly effective in SPMS, and none yet licensed in PPMS, although ocrelizumab has been shown to have very slight benefit in delaying deterioration for people with PPMS.

Given this relative lack of efficacy of the standard DMD treatments for progressive forms of MS, it is no wonder that people with progressive multiple sclerosis, whether PPMS or SPMS, are looking at whether other treatments might be of value, particularly whether the lifestyle changes OMS advocates can help.

How effective is OMS?

Answering that question requires synthesis of a whole lot of disparate medical literature, as no-one to date has done a properly controlled trial of comprehensive lifestyle change in progressive MS. So we have to extrapolate from what is known to determine if there is a real possibility of the secondary preventive approach that OMS advocates actually delaying, stabilizing, or even improving disability for people with progressive forms of MS. In these situations, it is always best to go back to Swank’s work.

Swank enrolled 150 people with MS in his 34 year study on a low saturated fat diet which he published in the Lancet in 1990. He didn’t of course study any of the other components of the OMS lifestyle approach, just diet. Of the 150 people, most started the study with moderate or severe disability. Although not specifically reported, many of these must have had progressive disease, either PPMS or SPMS. 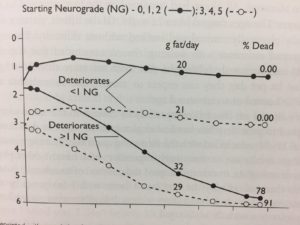 Figure 4 on p88 of the new OMS book, taken from Swank’s publications and reproduced right, shows that these quite disabled people, if they were able to stick to the low animal fat diet, deteriorated much more slowly than the group who could not stick to the diet.

This strongly suggests that minimizing saturated fat intake is likely to help progressive forms of MS. In our own HOLISM studies, we have looked at all types of MS together when analyzing lifestyle influences. When considered together, people with RRMS, PPMS and SPMS had dramatically better outcomes with lower animal fat intake and more fruit and vegetables, that is, essentially with the OMS diet.

Other key factors of the OMS

This implies that the other aspects of the OMS Recovery Program may have had additional benefit over just a low saturated fat diet. While there are the usual caveats about our research being observational and at just one time point, limiting conclusions that can be drawn, these findings fit with our central hypothesis, that a comprehensive lifestyle program is likely to result in less disability for ALL people with MS.

This hypothesis of course was put together after careful critical appraisal of an enormous amount of medical evidence, much of it from disparate sources and not easy to find.

The evidence is summarized best in the most recent OMS book, Overcoming Multiple Sclerosis: The Evidence-Based 7 Step Recovery Program. Mostly, that research, whether it was on diet or the other aspects of the program, did not differentiate between the different types of MS. So, it was considered to apply to progressive forms of MS as well as RRMS.

Our OMS experience has been that we frequently get reports of people with progressive types of MS whose illness has responded well to the program, and their disability stabilized or improved.

Of course with a secondary prevention program like OMS, there are no guarantees; the program aims to reduce the risk of deterioration and allow some recovery.

Further studies within our Neuroepidemiology Unit will look more closely at sub-groups of different types of MS within our sample and how people do or don’t progress over time with disability, and what factors determine that.

For now, we can be somewhat reassured by the evidence to date, that people with PPMS or SPMS can reasonably expect to stabilize their deterioration with adherence to the OMS Recovery Program. For many, once the illness is stabilized, there will be some functional recovery.