An OMSer's review of the Riddel Hall event

Maire Masterson shares her experiences of the Overcoming MS one-day seminar at Riddel Hall in Belfast, held on 29th April 2018.

Maire Masterson recently attended our 7 Steps to Overcoming MS event in Belfast. She shares her experience of the event below.

I had registered for this event that had been scheduled for March, but was postponed until April due to adverse weather conditions.

I was really glad of that. I had certain preconceived thoughts about this event - would it be just another money-making event aimed at vulnerable people? Was it just another program similar to Terry Wahls' protocol or the 'Best Bet Diet'?

It couldn’t have been further from the truth. Initially I must have been a nightmare to deal with in relation to emails I had been sending to Karen, the events coordinator, before the event looking to see if my husband could attend some of the talks.

Everything worked out well with him enjoying the refreshments and food. The introduction to this event was given by Gary McMahon, CEO of Overcoming MS, who put us at our ease. Dr Jonathan White, who himself was diagnosed with multiple sclerosis, outlined a Beginner’s Guide to OMS.

When Jonathan was diagnosed, he did extensive research into managing this condition. He came across the OMS Recovery Program and it really appealed to him as it was evidence-based. He began following the program and is now an advocate of this approach. Dr Conor Kerley outlined the importance of diet, nutrition, sun and vitamin D. He spoke about the levels of vitamin D that people diagnosed with MS should aim for.] 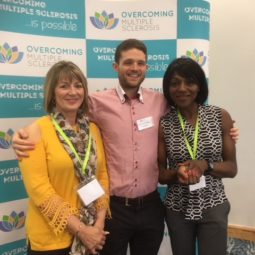 Dr Conor Kerley (middle) at the OMS Belfast event at Riddel Hall in 2018.

As someone who had become gluten-free, even though I wasn’t gluten intolerant, believing gluten avoidance was important.

At the event, Conor showed a study which suggested gluten avoidance may be detrimental to the progression of MS. I spoke to him during the break and he confirmed that there indeed was one study which showed this. Phil Startin, who has Primary Progressive MS, talked about the importance of exercise as well as mindfulness. He spoke of the effect of stress on the amygdala (the part of the brain associated with the fight or flight response). Both mindfulness and meditation help in reducing the effects of stress, allowing the body to heal. Phil had experienced ‘foot drop’ and was able to reverse this by using specific exercises.

I was especially pleased when he mentioned Trevor Wicken, founder of the ‘MS Gym’ who, as well as offering membership, also posts free lessons and exercise guides on his Facebook page. I missed the summary of the day's events by Dr Jonathan White and Gary McMahon called ‘Do Whatever It Takes’. In all, my immediate impression was the friendliness and helpfulness of the volunteers, organizers and presenters. Their aim was to assist people in overcoming MS. I was also delighted that so many young, newly-diagnosed people were in attendance. People from England, the Netherlands, and the Republic of Ireland all made the effort to attend.

They were now being directed in the right path. I wish that this had been available to me over 20 years ago but it’s never too late. As regards my initial concern being that this a money-making event, I now wonder how the organizers were able to manage all their expenses - hiring the venue, the refreshments, the fabulous lunch, the presenters and official staff. All food served - snacks, lunch, etc - were OMS approved. Even the OMS cookbooks and book were being sold at cost price.

My only regret was that I was unable to persuade any of the members of my own branch of the MS Society to attend. On a happier note I’m now enjoying sourdough bread and coffee, even though I still stick to avoiding sugar. Stevia is fine. After the day Karen has been very informative on questions that arose for me after the event. My heartfelt thanks to everyone. Namaste.

From Chair to President: the impact of Overcoming MS and its founder Linda Bloom

We are delighted to announce launch of this fund, set up to provide bursaries in Yianni's memory for young people diagnosed with MS. The scheme is intended to financially assist qualifying individuals under 35 in the UK to enable them to attend an OMS retreat.
Dislike 0
0 Likes
0

As part of our latest fundraising campaign, the Hampshire Circle have hosted their OMS Big Picnic, raising over £135.
Dislike 0
0 Likes
0

Our latest conference event took place on June 8th 2019 at the Assembly rooms in Edinburgh. The theme of the day was: Recovering from MS - wishful thinking or realistic optimism?
Dislike 0
0 Likes
0

39 participants joined us for an autumnal 5-day residential retreat in the beautiful Brecon Beacons region of Wales.
Dislike 0
0 Likes
0