OMSer Katy Deacon answers some of our questions about being diagnosed with MS, finding the OMS Recovery Program and what life is like for her now. 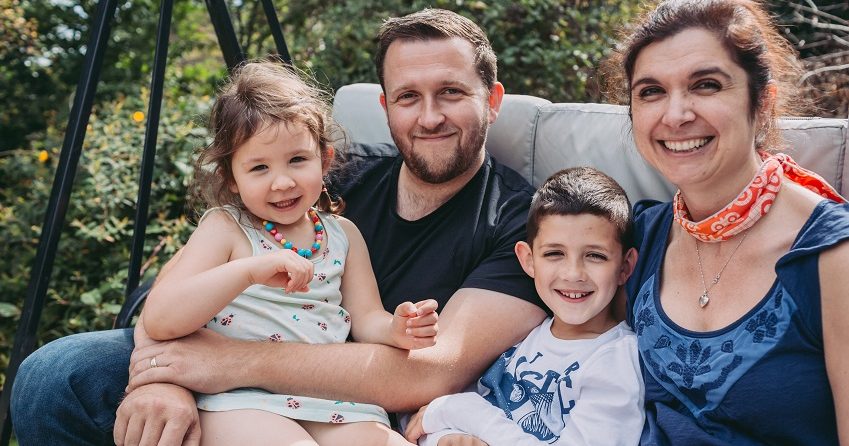 Katy Deacon is 37 years old, married to husband Scott with whom she has two children. She works as an Information Governance Manager in West Yorkshire.

Katy began following the OMS Recovery Program just a few months after being diagnosed with multiple sclerosis (MS) in early 2012. She recently took the time to answer some questions about her MS diagnosis and the changes she has made to her.

Tell us about your symptoms, how you knew something was wrong and when you were diagnosed.

I suppose when I look back, my life with MS consciously started in the summer of 2011. I used to walk into work and as I walked, I would lose control of my bowel.

I ended up getting into the office at 7 am so I could clean myself up before everyone else came in. I developed a reputation of being focused on my career which I agreed with, as the alternative was too frightening.

My GP said I probably had irritable bowel syndrome (IBS), so to watch what I was eating. I adapted to my new 'normal' and carried on with life.

That December my husband Scott and I went for a weekend away to celebrate our sixth wedding anniversary. We had a wonderful time but had to stop six times on the way home, in a journey which usually takes an hour, because my bladder couldn’t hold much fluid.

That time the GP suggested it could be a bladder infection, so I took the antibiotics and adapted again. Just into the new year, my legs stopped working.

I had to use an umbrella to walk anywhere outside and I clung to walls and furniture inside. This time Scott had to help me into the GP’s surgery and explain why I was there as I was too upset to be understood.

My GP ordered an urgent neurologist appointment and the wait began. I saw the neurologist in early March and he booked me in for a range of tests.

I played every card I could think of to get the MRI, blood and nerve conduction tests done as quickly as possible. Looking back, it only took three weeks but they were the longest three weeks of my life. Throughout all this, I tried to keep my life going.

Scott had to drop me at work before taking our two year old son to nursery, then pick us both up at the end of the day. Then I got the call from the neurologist to come into the hospital.

We got there at the start of clinic and he ushered us into his room to give me a prescription for steroids. "Why steroids?” Scott asked. “Well that’s what we treat MS with,” was the reply. MS – my heart stopped. Scott squeezed my knee and everything that happened from then until we got home remains a blur.

When did you discover OMS?

I discovered George’s book in June 2012 and it was like someone had turned a light on in my world. It gave me hope and a plan of attack, I could stop being a victim and start taking back control.

I started following OMS on June 25th 2012, although I didn’t fully understand the details about oil initially. Nevertheless, things started to turn a corner, at least mentally.

I didn’t want to take the disease-modifying drugs (DMD's) that were offered as we wanted another baby and I couldn’t let this situation take that away from us too. So we set off on our OMS journey and things became brighter.

We adapted to another new normal and our daughter was born the following July. It wasn’t until I attended the 2014 Ammerdown OMS retreat that I fully understood what I should be doing and why. But by then, making the final adjustments wasn’t too hard and, because the science made sense, having the whole family follow the program seemed like a simple shift.

At first it seemed like a massive leap of faith as the OMS Recovery Program was in contrast to doctors' advice and the wider food culture of the country, but once we understood the science behind it, OMS became a no-brainer.

Is there a time in your OMS journey that stands out as being particularly trying or difficult?

Last spring things were tough. We all got a virus, which was nothing special, everyone else had it and recovered just fine. But for me, a virus with a raised temperature meant I couldn't walk or even move my legs out of bed . My family was downstairs, my kids were running around.

Scott was trying to sort everything out and there’s me stuck upstairs getting really upset. Even simple things like getting to the toilet were impossible and for a double incontinent, that’s a nightmare.

I started looking up care homes for MS patients, so my family wouldn’t have to deal with all the difficult things I bring with my MS. After a few days of meditation and healing, I decided that getting upset was a waste of time and energy.

I realized that if the house was different downstairs then when I was ill I wouldn’t have to feel trapped and isolated, I could use my scooter or a wheelchair to get around.

As I’m a chartered engineer, I have the skills and knowledge to know what I had to do, so I got on with designing a new ground floor and outside space for the house. That was the start of a year-long project, doing whatever it took to transform our house.

I was astounded by the support and funding we received along the way and looking back, it just shows that good things can come from bad. Now, our gorgeous bedroom is downstairs next to our beautiful shower room.

My scooter lives in the utility room, ready to whizz me out into the garden I couldn't go into for three years as the ground was so uneven. If I’m ill, I can be wheeled around and still be part of the family. Getting this work done has made the world of difference to us all.

What is life like for you at the moment?

At the moment, my biggest worry is about my daughter and if she will be OK starting big school. It’s funny, I know I’m expected to have worries because I have such difficult symptoms to live with but I don’t have any worries about my health.

OMS has given me and my family such a strong and positive foundation that MS isn’t a feature in our lives, just the symptoms I have to manage.

I’ve been properly following OMS for three years now and now my MS has changed from ‘rapid and aggressive’ to ‘dormant’, gradually symptoms are dropping of the list and things I thought I’d lost are returning. It’s an incredibly slow process but it’s happening and it’s wonderful.

Given your experience, what advice or words of wisdom would you give to someone whose either newly diagnosed with MS or struggling with their symptoms?

I find the two most difficult things about dealing with MS are the uncertainty and unpredictability of my body. My life with MS is totally different to anyone else’s life with MS and, because of that I can feel incredibly lonely. My condition just after diagnosis could change hour by hour.

This can still happen if I have an infection but things are steadier more often than not now. When things get uncertain and anxiety creeps in, I take a breath and remind myself to not look too far ahead.

My mum has a wonderful phrase, “keep on inching” and that’s what I tell myself. By just taking that next breath, that next step or that next bite and concentrating on the immediate situation in front of me I get through. Then when I reflect on where I am, I’m amazed I have made it through. So, if you’re in a difficult place, for whatever reason, just keep inching. When you look back after an hour, a day or a week you’ll surprise yourself at how well you’ve done.

Dearest Katy - Helen Lee has just pointed me in the direction of your blog.
What inspiration, you brave dear soul.
I keep to the OMS programme we were given at Ammerdown in 2014 but I am very disheartened by the programme and I find all the success stories on the website very off putting., How wonderful to read your honest account of the realities of MS and your amazing positivity.
Reading your account I realise I've used MS as an excuse to 'give up on life' ( I hang my head in shame)
What a dreadful admission - you Katy are an inspiration to keep going
It is a joy you see you with your wonderful husband and beautiful children
Much love to you all
Faith xxxx

As we start what could be another tough few months, finding beauty in the simplest of things has never been more important. Mary shares her personal story as well as how she seeks positivity through her grateful attitude.
Dislike 0
1
1
Login Register