Whether it was a working lunch, a garden party, or a sit-down supper, many of you answered our call to take part in our first-ever OMS Global Dinner Party.

Whether it was a working lunch, a garden party, a meat-free BBQ (who’d have thought it!), or a sit-down supper, so many of you answered our call and took to your kitchens to take part in our first-ever OMS Global Dinner Party at the end of May, to mark World MS Day 2016.

In total, some 60 dinner parties were organised in what became a truly global affair. In London, the OMS Trustees hosted an intimate, three-course dinner for friends and family, some of whom had travelled from as far away as Sweden, Israel and Australia.

Linda Bloom told her story, Thom Worth provided the entertainment, and the generosity of the guests resulted in almost £40,000 raised for OMS.

Tim Cobb’s fundraising lunch in Brighton, UK, not only raised over £11,200 for OMS but also provided him with a platform to publicly disclose his own MS diagnosis to almost 200 people - information he’d kept private for the previous four years.

In Austria, Ian and Karin catered for almost 30 people, all of whom said how impressed they were with the food (and one of whom had to donate an additional €2 to the grand total – in some inspired fundraising – after being caught swearing by one younger guest). In New Zealand, Christine Robertson and the Rotary Club of Greymouth served steamed fish, vegetables and red lentils with wholemeal poppadums.

And the sun even showed up to Stephanie Pielot’s garden party (showing the kitchen preparation in second pic, below) in Southampton UK, adding that essential vitamin D to make it a thoroughly OMS affair. At OMS HQ, the whole office pitched in to prepare a sumptuous spread of salads, gluten free focaccia, falafels, vegan brownies and lots more. We’re told it sent them all off to sleep for the afternoon…

The Professor thanked everyone and even joined in from the kitchen of a camper van in the middle of Australia. And these are but just a few of your stories. Some suppers are still to be held, and some accounts yet to be sent in, but what we know is that you all made this event an incredible success for OMS.

You have helped us to raise vital funds, as well as that all-important awareness, and it sounds like there was plenty of fun (and full tummies) along the way. Thank you all for being a part of it and please do keep sending your stories and yummy dinner party pictures in to fundraising@overcomingms.org 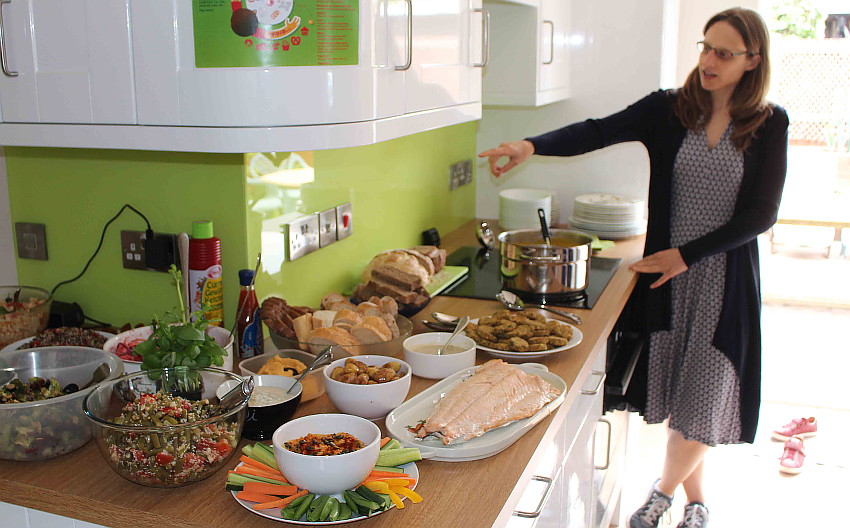