Recovering from Multiple Sclerosis makes its way into bookshops, kindles and people’s lives. 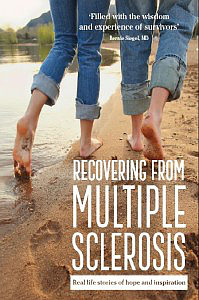 w book Recovering from Multiple Sclerosis makes its way into bookshops, kindles and people’s lives, so the publicity machine is jumping into gear.

As co-author with  George Jelinek, I am excited to have another chance to spread the word that recovery from MS is possible, to help promote a new paradigm for this disease. I didn’t set out to be quite so public about my journey with MS. Far from it.

When I got off the plane in Melbourne to attend an Overcoming MS retreat nearly three years ago, I was terrified of meeting other people with MS and identifying myself as belonging to that group.

I was newly diagnosed, very afraid, and somehow a little ashamed as well. But something happened to me that week, and after that I just couldn’t shut up about it.

The ABC’s 7.30 Report was filming at the Yarra Valley, documenting the success of Prof Jelinek’s 5-Year follow-up study of people with MS who had attended retreats.

And I volunteered to be interviewed. When the show subsequently went to air it was the first time many of my friends realised I had MS.

It was a little strange, getting phone calls and texts from people who had just seen me on TV…but I knew I was helping to promote a really important message. And once I’d started I just couldn’t stop.

With my background as a journalist I wrote a radio script for ABC’s Life Matters about my MS journey.

I joined the OMS team, started helping out with the Facebook page, and became more active on the Forum. Before long, this wonderful OMS Forum had sparked a conversation that led to the new book Recovering from Multiple Sclerosis: Real Life Stories of Hope and Inspiration.

Someone had posted a request for long term followers of OMS – who were doing really well – to come forward and give hope to the newly diagnosed.

With so many MS survivors keeping in contact with George, but not necessarily active on the forum, the idea emerged for us to write up a small selection of their stories in a book, to document what recovery actually looks like and to make it real for everyone.

Within weeks we had signed a publishing contract with Allen and Unwin. When we started the project I was still feeling quite unsure of my own future health. But talking to these survivors, listening to their incredible stories of hope, courage, determination, triumph and ultimate wellness, I felt a new conviction rise up within me.

Not only was it possible for them to recover from MS – I had seen the evidence with my own eyes – but I fully believed that I would be able to do it too.

The twelve stories we’ve included in the book are of so-called ordinary people from all over the world: a chef, a musician, a nurse, a doctor and a hospital orderly among them – who have taken control of their health and over many years recovered from MS.

Relapses halted, progression reversed, health and mobility gradually regained. Their personal stories have been told with courage and honesty in the hope of inspiring others.

Three years on from diagnosis I feel very differently about being labelled by my disease. I no longer feel shame or terror and I’m proud to belong to this wonderful group of survivors.

And my hope for the new book? That it encourages the wider MS community to see recovery as a real option, as something to realistically consider and start talking about.

And that everyone with MS who reads these stories feels the same conviction that I did, draws the same hope, and by the end has been transported to a new level of belief in their own personal recovery.

Can I tell you about multiple sclerosis?

Angela Amos, is the author of a new book, Can I Tell You About Multiple Sclerosis?, aimed at breaking MS down into very simple terms for friends and family.
Dislike 0
0
0
Login Register

A funny thing happened on the way to the neurologist

Shona's book is a light-hearted take on living with multiple sclerosis, and is available as of this month from Pink Cottage Publishing.
Dislike 0
0
0
Login Register

Anatomy of the Spirit

We’ve all been there: the job where we feel an imposter; decisions made to keep other people happy; or the relationship that in our heart of hearts we know... just... isn’t... right.
Dislike 0
0
0
Login Register