“Now class, we will sit silently until the bell rings.” We were suspended on the brink of the weekend, each alone at an immovable desk.
mindfulness

“Now class, we will sit silently until the bell rings.” We were suspended on the brink of the weekend, each alone at an immovable desk, and enfolded in a deeply calm and relaxed atmosphere of our mutual creation.

This was how Friday afternoons ended at my new school in second grade. Lately I wonder how Miss Murphy routinely accomplished such a feat of peace and quiet with thirty children in her class at Vernon Street School.

We had cleaned out our desks, and filled the waste basket in the corner with all the scrap paper of the week. Books and notebooks were arranged neatly in our desks and on shelves around the room.

Meanwhile, Miss Murphy washed the blackboards with a big sponge, and someone stepped outside to clap the erasers free of chalk dust. Inside my desk, my pencil case was clean of shavings, and my eight crayons were lined up in rainbow formation in their little tin box.

Now our job was to settle down, cease wriggling and whispering, while Miss Murphy strolled the perimeter, absorbed in the task of watering geraniums on the windowsills.

With tasks completed, and Miss Murphy seated at her desk in front, a stillness descended among us, until the slow ticking of the clock on the wall was the only sound in the room. We knew what came next: the bell would ring dismissal and the spell would be broken. For the time being, however, there we sat, in a small eternity. 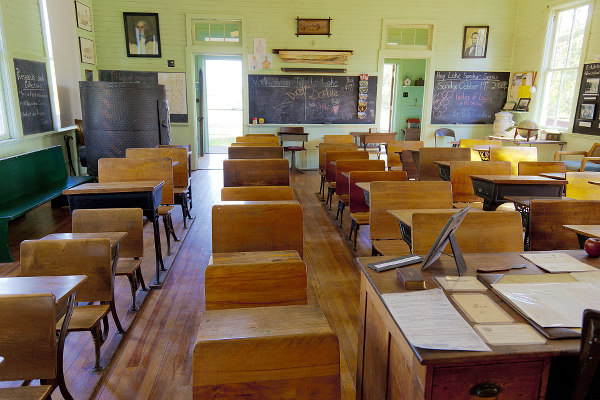 When summer came and I went to camp, I met girls from other towns for the first time. Comparing school experiences, it turned out they, too, had to sit quietly before dismissal on Fridays.

Oh, it was the worst, absolutely the worst part of school, they squealed, shivering at the thought. Surprised to discover a secret difference between my new friends and me, I am sure I did not pipe up to defend Miss Murphy.

Normally, I whispered and passed notes like anybody else. More than anybody else, actually. I was talkative and jittery, and I sometimes jiggled my leg involuntarily or tapped my pencil until asked to stop.

But I knew I rather liked the Friday afternoon stillness. I enjoyed the silent time at school the way I did some of my favorite things at camp, like staring at the fire, or listening to rain drumming on the tarp above my head. I liked the change of pace, which slowed until eventually there was nothing at all to do, exactly. I liked the safe solitude of my desk, where no one intruded on my space, or interrupted my thoughts. 'Thoughts' isn’t the right word, exactly. Not having to attend to anything outside myself, what came to the fore were not so much thoughts as sensations. A breeze through the open window grazed my cheek; outside, the breeze caused the flag and its rigging to flap and clank against the flagpole. My oak desk was smooth and shiny, and my fingers sought out the darkened nicks in the wood left by other children before me. The tranquil mood heightened my senses, and I found it thoroughly absorbing just to sit there and enjoy the full panoply of experience they delivered to me. How in the world such a meditative tradition came to be established in New England public schools in the mid-twentieth century, I’m not sure. Long ago there were Puritan children here, compelled to sit still all day on Sunday. Our teachers were Irish Catholic women (Miss Murphy, Miss Maginnis, Miss Finn, Miss McGinty…) who may have gone to parochial school and learned quiet meditative habits there. Unfortunately, unskillful instruction in paying attention (“Pay attention!”) can veer toward the punitive, and too many children everywhere suffer that experience. Forceful suppression of individuality can cut a person off from discovery and experience of their own unique being, making it difficult to ever be quiet on the inside. Constant distraction has the same effect. 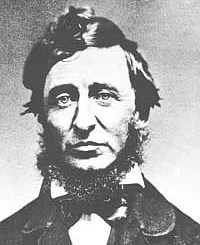 Lucky for us, we have the example of Henry David Thoreau (pictured), Massachusetts local hero and freelance transcendentalist, who would “rather sit on a pumpkin and have it all to myself, than be crowded on a velvet cushion.”  “Wherever I sat,” Thoreau wrote in Walden, “there I might live, and the landscape radiated from me accordingly.” Sometimes Thoreau could discern the chime of a distant church bell from his cabin on Walden Pond.

At three pm on Fridays, we heard the shrill dismissal bell – and were challenged to maintain composure just a little bit longer, until the moment we burst outside. Monday morning, teacher called the roll, to which we replied, “Present,” and a new week began. And so we learned to try to be – present.

There are many ways to meditate, and not all of them involve effortful concentration. When we allow ourselves to call to mind and enjoy a deeply peaceful state experienced in the past, the brain readily realigns the neurons and chemicals that created the state in the first place, even if it was long ago. Neural networks grow stronger, the more we practice them.

This is not idle fantasy we are talking about; nor is it you being ‘way too introspective’, if that’s what your relatives would say. It is a beneficial mental activity to engage in. Neuroscientist Willoughby Britton explains it well in this engaging TEDEx talk, and Sarah Lazar summarizes the science of mind-body medicine in an interview in the Washington Post. For multiple sclerosis specifically, OMS founder Dr. George Jelinek brings the message home. Find more resources on the OMS website.

Marilyn McArthur, Ph.D., is a Mindfulness-based stress reduction (MBSR) instructor in the US. Meditation is one of the central elements of the OMS Recovery Program, alongside diet and supplements, exercise, vitamin D and, if need be, medication.