Five years after being diagnosed with MS, Catherine summited the tallest peak in England to raise awareness and funding for Overcoming Multiple Sclerosis. 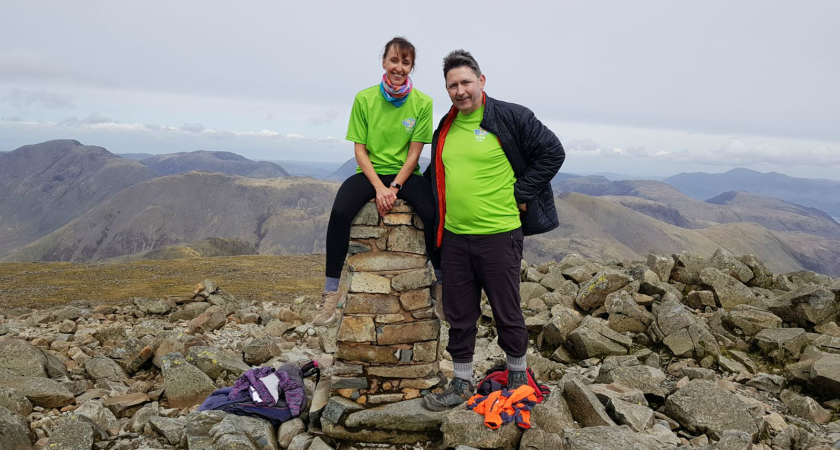 My journey with MS started in October 2012 with a visit to a neurologist who made the diagnosis immediately following an MRI scan. I was referred because I had had some difficulties whilst running with a weakness in my right leg. It was a complete shock because I did not expect anything serious.

I was a busy mum with four kids in reasonably good health who kept fit and ate healthily, or so I thought. My neurologist told me to just get on with life and enjoy things while I could, which is what I did.

In the early part of 2013 my husband’s inquisitive and educated aunt in the USA started emailing me lots of papers and links to articles on MS and lifestyle changes to improve outcomes.

It was here that I first came across the work of George Jelinek. I bought the book and read it diligently. I also passed it to my friend whose father had suffered with MS. She came back to me and said, “You don’t have a choice.”

I started following the program on the 1st May 2013 and haven’t looked back since. My husband, eldest daughter and I attended the Brighton seminar in June 2013 where we heard George speak.

His rationale was compelling and we became more determined to make this work. In my mind I told myself I would give it five years and then make a decision. We attended a retreat in 2015 at Ammerdown, there we met some amazing people.

For some the illness had taken a strong grip, but others were less severely affected. However, we all came away with a determination to make this work. I can’t say it’s been easy. There have been many tears shed, days of frustration when you feel out of control of your own body, and nights of fear when you don’t know what the next day will bring. But the five-year goal kept nagging in the back of my mind. 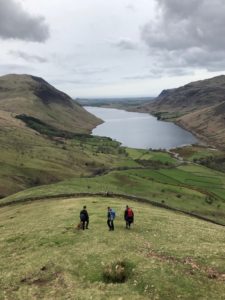 In 2017 I decided that I would be able to take on the Overcoming MS 24 Peak Challenge. This was a chance to prove to my MS that I was in charge, to help OMS raise funds and to pass on the message of 'paying it forward’.

I started my fundraising and increased my training regime. However, by the summer of 2017 I realized that this challenge was a tough one for even the fittest triathletes, never mind someone for whom balance can sometimes be an issue and whose left leg sometimes gives way. With the help of a personal trainer, I

I began working on balance and strength and then took on a more realistic goal for myself of climbing the tallest peak in England, Scafell Pike, in 2018. Well Friday 27th April 2018 was that day. We set off from Wasdale Head to the summit of Scafell Pike.

The weather forecast had been horrendous all week but we were well-prepared and had an amazing guide and plenty of provisions. Someone upstairs was looking out for us and the bad weather never materialized. We made it to the top with glorious views as far as the Isle of Man and not a drop of rain to be felt. It wasn’t the easiest of climbs and coming down was slow and deliberate but I made it!

Hope for the future

I’ve now made it to my five-year anniversary no less determined and still full of hope. I am sure there will probably be more trips and stumbles along the way, but I’ve also been so fortunate not to have done this alone.

I’ve had my wonderful husband, kids, family, friends and OMS friends beside me, sometimes literally catching me when I fall. I hope that my personal story will help inspire others as George and OMS have inspired me, and give hope to all of you during dark times.

There is a choice for all of us. Working everyday in a positive way to get better has helped me and given me confidence to believe I will become symptom-free in the years to come. Onwards and upwards...

ould you like to follow in Catherine's footsteps by taking on a fundraising challenge for OMS? Find out more here.  You can find Catherine's JustGiving page, where she is fundraising for Overcoming MS, here.

"OMS gave me a sense of hope and empowerment"

Nikita, from NSW Australia, has been following the OMS program for three years. She shares her journey from her initial diagnosis and being fearful of her future to finding hope through OMS.
Dislike 0
0 Likes
0

Four years on - from diagnosis to disability to healing

"OMS has allowed me to take control of something I initially thought I had no control over." Simonne shares her story after following the OMS program for four years.
Dislike 0
0 Likes
0

Veronique challenges herself for OMS

On the 12th of May, I woke up with a smile. The previous night, I had finally reached my fundraising target of £1,000 and I felt prepared for the Lagos half-marathon. I was happy!
Dislike 0
2 Likes
0