To tell or not to tell

You’ve just been told you have MS. You’re dealing with so many emotions and asking yourself: What effect will it have on my life? What will people say?
disclosure

You’ve just been told you have multiple sclerosis. You’re dealing with so many emotions – shock, disbelief, grief, fear. Among all these feelings, you’re asking yourself: What will people say?

What effect will it have on my life when I tell them? Should I even tell them at all? We spoke to two people who decided to tell people about their diagnosis, and two who didn’t.

They explain their reasons for their decision. Andrew, a 68-year-old farmer, took the view that he wanted everyone to know. For several years, his condition was mistaken for spinal stenosis, and he had had two operations.

"My three staff members had become used to my falling and getting tired. They accepted my progress from the strongest to the weakest member in the workforce, and I was sometimes humbled by how ready they were to help. My senior employee had expressed concern at my deteriorating physical abilities. I think his concerns centred around his employment. When the MS diagnosis eventually arrived I felt an obligation to inform them all, and to assure them their jobs were safe. We’ve had some staff changes since then, and the present incumbents accept my MS as easily as they do my hair colour."

Andrew is also a JP, and sat as a lay judge in the district court (equivalent of a magistrate in England). Again, he told people there as soon as he knew he had MS, and was humbled by the efforts of colleagues to make his life easier.

"I was assessed as being unable to write because of difficulties with my hands. So a complicated recording system for the court relayed into my chambers was ordered. Someone donated software so that I could dictate to the computer rather than type. (Incidentally, I have since regained the ability to write – which may be a result of the Overcoming Multiple Sclerosis lifestyle.) When I meet somebody who I haven't seen for a while, or someone new, the usual comment is 'how is your hip?' or 'bit too much to drink?' I prefer to be open with these people as well."

His family has been supportive too. One of his grandsons even volunteered to have an OMS legal birthday cake just so grandfather could have some!

"I'm glad I've told all these people. For me it's been the right thing, and is somehow part of my recovery. But I didn’t know about my MS till I was 68, and I was working for myself. If circumstances were different, my response might have been very different."

In 2009, when 33-year-old Kellie suddenly found herself struggling to walk, she had no choice but to tell people she was having tests for MS. But the tests proved inconclusive. "Family, friends, work colleagues and I breathed a collective sigh of relief," she says. She recovered, and life went on as usual. Three years later, her next relapse left her blind in one eye, and MS was confirmed. At that point, she decided to keep the diagnosis secret.

"I passed it off as a random eye problem with acquaintances and colleagues, and only told family, close friends and senior management at work. My argument was if my children (then aged six and three) didn't know then it's no-one else's business. But it really goes against the grain with me as I've always worn my heart on my sleeve and been very open and honest. I did feel bad when a friend was telling me that he had just received the all-clear after a cancer scare. He said 'Well, you've been there. We thought you had MS and it turned out to be a false alarm.' Instead of taking the opportunity to tell the truth, I just replied 'Yeah, I dodged a bullet there.'"

She was pleasantly surprised, though, when she did tell people.

"My preconceptions were that people would pity me and/or think I was deluded in following the OMS plan. The reality has been very different. For example, I've been open from the start with my headteacher at work (I’m a secondary school teacher) and she couldn’t have been more supportive. She organised my timetable so I had every Wednesday off and thought the OMS plan was amazing."

In 2015, though, Kellie was asked to be the inspirational speaker at an OMS event in Berkshire, which meant she missed a couple of days’ work. At that point, she decided it was time that people knew she had MS.

"With my agreement, my boss explained to staff where I was, effectively doing the telling for me. I'm now really open about it. Good things have happened since – including a recent promotion to the senior leadership team – and I’ve found a lot of my worries were unfounded. I’m now back in work full time, with no symptoms and four years with no relapses."

When Joanne was diagnosed in 2004, after two bouts of optic neuritis in one eye, she had just joined a Graduate Scheme at a bank. She was 26.

"I was paranoid I'd be overlooked there," she says.

Her neurologist advised that it would be best to keep it secret from everyone other than immediate family and close friends. Joanne’s boyfriend, Richard, was on a world tour prior to her diagnosis. She decided to wait until he returned to tell him her news.

"So that meant four months of stewing, stressing and imagining all possible scenarios. Meanwhile, I carried on living my life as I had before, doing crazy hours at the bank, burning the candle at both ends. 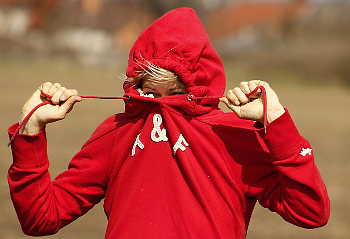 "When Richard returned, I broke the news and we had a period of six months on and off, and then got together officially again. And here we are over 10 years on, happily married with two boys."

For about five years, Joanne managed to hide her illness. The only people that knew continued to be her parents, brother, best friends, Richard and his parents.

"I hid it well. When things hit, I'd make up ridiculous fibs like I'd twisted my ankle so couldn't go on that long walk, or do that charity cycle ride with work. Only when my mobility started to be severely affected did I decide to tell everyone. By that time, I'd left the bank and moved to a smaller firm where work was a lot less stressful and my colleagues were very understanding and supportive."

With the benefit of hindsight, would she do things differently?

"A big fat yes. I think the years of pretending I was fine, and trying to keep up with everyone in the office, definitely played a role in the progression of my MS. I'm not one for regrets – I made a decision and stuck to it – but if I were to relive those years, I would have been open about it from the start. But I guess that's easy to say now. I understand why I made the decisions I made."

Anne says there wasn’t an option about whether or not to tell people about her diagnosis. She had been struggling for many years with her mobility and with severe bouts of vertigo, and all medical investigations had come up with nothing.

"So many people were worried about me. When I told family and friends that I was at last – at the age of 56 – to have an MRI scan, they all wanted to know the result as soon as possible. It was a shock to know it was MS, and yet in another way, it was a relief. I’d even started to doubt myself – was all this psychosomatic? I knew those close to me didn’t doubt me at all, but I think other people must have thought I was making excuses when I couldn’t go to events or take part in functions."

Anne’s mobility and vertigo had already been doubted by her employers. Her ability to work was erratic, and they questioned why she was unable to work one day when she had seemed perfectly fine the day before. After many months, they found a way of relieving her of her position.

"They’re the only ones I haven’t told about my diagnosis. It was five years since I’d lost my job, and my immediate reaction was to phone them and say 'you see? I wasn’t making it up!' A couple of people said I could get a case together for compensation. But what was the point of dragging it all up again? It would bring back all the hurt and pain of that time, make me stressed, and certainly not help with mindfulness!"

When she makes new acquaintances or joins social groups, she finds it helpful to tell people quite quickly that she has MS.

"It means they make allowances for me. They might otherwise think I was drunk, or weird; instead of which they accept that I need to sit down and might not be able to join in all the things they do. I’ve had so many years of people thinking bad things of me – it’s almost good to be able to say 'this is why I’m like I am.'"

On the whole, it seems that the two who chose to be open about their diagnosis had three things in common. They were older, didn’t have a career to worry about, and they’d had unexplained illness for several years. Perhaps these are common reasons why some people choose to tell, and others don’t?