This Way Up - biking through Scotland with MS

Andy McKenna, an avid mountain biker, will be riding across Scotland to highlight his holistic approach to managing his multiple sclerosis. 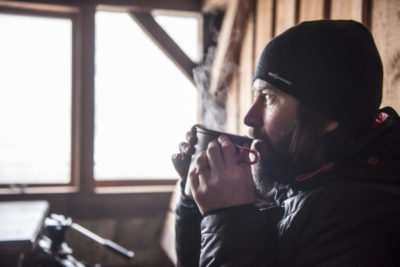 Andy McKenna has been mountain biking since the 1980s and is a professional mountain bike guide, making his living from running mountain bike adventures in Scotland. He was diagnosed with multiple sclerosis (MS) in 2007.

Although he didn’t know it then, far from being the end of his mountain bike career and his life, this (apparently) incurable degenerative neurological disease was the start of a different kind of mountain bike journey.

A hysterical, ridiculous, rewarding, precious one. "Everyone experiences challenges in life. Some get buried under the veneer of a normal existence. Facebook selfies and glorious Instagram shots don’t always tell the whole story.

Finding the connection between the realities of life and how we deal with them - when coping from behind handlebars is the primary tactic - and will hopefully strike a chord with many whether they ride or not. Biking helps to cope, to escape and to keep me sane." says Andy.

Andy has partnered with first-time filmmaker Andy McCandlish to tell the story of his medication-free, holistic journey to health and what he has learnt along the way. The film, This Way Up, is a ‘broken' man’s journey by bike through his homeland, Scotland. Watch the trailer below.

The full film is being screened across the globe throughout 2018, raising funds for OMS and The Swank Foundation. For a full list of screenings and how you can attend a screening (or perhaps even host your own), see Andy’s Facebook Page, Stoked on MS.

Alongside his film, Andy has also raised funds that will benefit both Overcoming MS and the Swank Foundation. He credits the charities for helping him to manage his symptoms and his life through diet, rest, exercises and other lifestyle changes. He hopes his fundraising will give more people the opportunity to live well with MS. So far he has raised over $7,500.

Five years after his diagnosis, Luke reflects on how the Overcoming Multiple Sclerosis recovery program has changed his life.
Dislike 0
0 Likes
0