What should we tell the children? | Overcoming MS Skip to main content
Notices / Blog

What should we tell the children?

When I was diagnosed with MS one of the first real quandaries my husband and I faced was what – if anything – to say to our three young children.

When I was diagnosed with Multiple Sclerosis one of the first real quandaries my husband and I faced was what – if anything – to say to our three primary school-aged children. That messy thought struck me before even the ones about whether to take medication, or whether to tell my employer.

Saying nothing wasn't an option

Saying nothing at all wasn’t really an option. The kids could already see that there was something wrong, and before I discovered it was MS I’d quite openly explained that I wasn’t feeling well, my legs weren’t working properly, I felt really tired.

But the diagnosis of something ‘nasty’ made me think differently, be more protective. Perhaps as adults we should keep it to ourselves? Maybe it was wrong to burden them with this knowledge when they were so young? I turned to all sorts of people for help.

At one stage I got my hands on a booklet called (if I remember rightly) ‘My Mommy has MS’. It told the story from a young boy’s perspective of growing up with a Mum who has an unpredictable and disabling condition. I think she worked in television journalism, and had to be flown home from a shoot because of an acute MS relapse.

Trips to hospital, sudden changes and disappointments, unpredictable lives…these were the new norms that were being exposed in the booklet, to prepare kids for the fact that life would be different from now on, and to help them understand why. I grappled with the message of that story, and decided I did not want my kids going anywhere near it.

Thank goodness! Just a few weeks later, and still living with my secret diagnosis, I was introduced to the work of neurologist Roy Swank and Professor George Jelinek. I realised that we can re-write our own stories with MS, and the endings can be much, much happier.

I adopted the lifestyle changes – started eating a whole food plant-based diet plus seafood, began exercising, meditating and increased my vitamin D level – and suddenly I knew exactly what I wanted to tell my children. I wanted to share what I now think is one of the most valuable of all lessons; that what we eat and the way we live has a profound effect on our health, and that we can heal our own bodies. I threw away the ‘My Mommy has MS’ booklet, and I set to work on some stories of my own. I drew a diagram of the central nervous system, added the existing damage to my spinal cord, explained about MS and said that this was why my legs weren’t working properly. Then I told them what I was going to do about it. It felt good to share the news in a largely positive way, and to bring them along on this health journey. 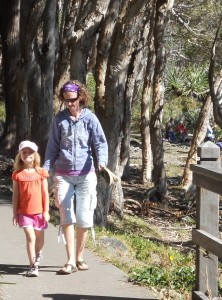 Over the next four years, as the new lifestyle became totally embedded within our family, the kids witnessed my health stabilise and then improve slowly but surely. Today their own knowledge of what constitutes healthy living is probably better than that of most of their school teachers, and they consistently make healthy choices even when they don’t have to.

Their advanced understanding has some interesting consequences at school. The conventional food pyramid – with dairy and meat featuring rather prominently as important components of a healthy diet – gets routinely challenged by my 11-year-old. “Cow’s milk is good for baby cows”, she says, “but not so great for baby humans. And anyway, we’re not babies!”

And her 13-year-old brother came charging into the kitchen one day all excited and asked “Mum, is MS a neurological disease? Because if it is I can use it to answer all my science questions for homework!” In the very first question he was asked to research the nature of the disease, and state whether there was a cure.

Growing in knowledge as a family

He thought about it for a few minutes and then wrote, “there is no medical cure, but it is possible to recover if you change the way you live and what you eat”. Since some of his classmates had also researched MS for the same question, his answer started an interesting discussion at school, and I was pleased to see that he wasn’t marked down for his unconventional response.

I love how informed all my kids are about MS, health in general, and how the way we live affects our outcome with disease so much. And I’m very glad that I felt able to be honest with them, that the truth – though difficult at first – was not so awful that I felt unable to share it. I have found that honesty always works best. Well, almost always…

One day I was shopping with my daughter at our local organic superstore. I arrived at the checkout and put my till receipt into the box to go into the draw to win the monthly prize. That particular month the prize was a spa and massage treatment, which had been labeled as a ‘Recovery Package” on the advertising poster.

My daughter was surprised that I wanted to enter. “But Mum”, she said, ”you don’t need to win that, because you have already recovered!” For a moment I considered explaining about the language, and how it didn’t mean that kind of recovery. But then I looked at her and smiled. “Yes, you’re right”, I said and gave her hand a grateful squeeze as we skipped out across the car park together.

MS is always there but it does not define me

It took me a while to figure out how to begin my story, because it’s not something I tell very often. My diagnosis of multiple sclerosis and subsequent journey with Overcoming MS is something I keep deeply private. Only my family and a few of my closest friends know about this part of my life.
Dislike 0
0 Likes
1

Don’t Worry, I Am So Healthy…

The only people who know I have MS are my closest friends and family. I work hard to keep this circle small because I abhor the expressions on people’s faces when they learn of, well, my incurable disease.
Dislike 0
0 Likes
0

Disclosure: why I decided to speak up about my MS

Is it the right decision for those with multiple sclerosis to tell people that they have been diagnosed with the disease?
Dislike 0
0 Likes
0

To tell or not to tell

You’ve just been told you have MS. You’re dealing with so many emotions and asking yourself: What effect will it have on my life? What will people say?
Dislike 0
0 Likes
0