Why should we practice meditation?

We all understand that a healthy diet is important. Exercise, too, is an obvious one. But meditation? How do I do it, and what exactly is it for?

“…there is nothing either good or bad, but thinking makes it so.” Hamlet. Act 2: Sc ii. William Shakespeare. How is your OMS journey going? Eating an OMS friendly diet? Check. Exercising daily? Check. Fitting regular meditation into your routine? Um… For the majority of us, adopting regular meditation practice is the final stumbling block in the OMS program, probably because it is the element that is least familiar to us. We all understand that a healthy diet is important. Exercise, too, is an obvious one. But meditation? How do I do it, and what exactly is it for?

Being mindful means living with an awareness of the present moment, rather than worrying about the future, or fretting about the past. Mindfulness is not about thinking differently or blocking thoughts out. According to A/Prof. Craig Hassed, one of the two course tutors, “Mindfulness helps us change our relationship with the thoughts and events that cause stress.”

Mindfulness can equate to better health, better relationships and better education. Through meditation practice we can become more mindful by training the brain to focus on the present.

The modern world is full of distractions, which makes being mindful difficult. Mobile phones, the internet, television: all help to flood our minds with information and ideas, much of which is unimportant or unhelpful. When we are in ‘default mode’ (acting on auto-pilot) it is easy for us to become distracted from what is really relevant.

Multi-tasking is often thought of as a ‘skill’ in modern society, and encouraged, but the reality is that multi-tasking can actually mean that we do several things badly, rather than one task really well. Meditation helps us to train our brains to focus on one thing at a time and to concentrate on what is important. When we are not mindful, we can allow ourselves to become overwhelmed and stressed.

'When you have a condition such as MS, living as stress-free as possible is hugely important. Invariably, you will have some very real "present" stress to deal with, so eliminating unnecessary stress makes life easier. Mindful meditation will also train the brain to be better equipped to respond to the real and present stress.'

When you have a condition such as MS, living as stress-free as possible is hugely important. Invariably, you will have some very real ‘present’ stress to deal with, so eliminating unnecessary stress makes life easier. Mindful meditation will also train the brain to be better equipped to respond to the real and present stress.

We know the phrase “I was worried sick…” and the truth is that, yes, it is possible to worry yourself sick. When we are stressed, we activate the amygdala area of our brains. This causes our bodies to flood with adrenaline and cortisol in preparation to fight, or run away from a threat.

This is an inflammatory response, which can have a very negative effect on our bodies, leading to chronic illnesses. Many thousands of years ago, when our ancestors lived in caves and didn’t have the benefit of a front door, the fight or flight response was very important.

The stress response activated because, chances were, the rustling in the bushes may well have been a woolly mammoth, and our ancestors would have had to fight or escape.

In 2016, the chances of finding a woolly mammoth in the back garden are slim, but we are still capable of activating our ‘fight or flight’ response, either by causing ourselves stress by worrying about future or imagined events, or dwelling on something negative that happened in the past.

Mindfulness and meditation can train our brain to stop creating ‘threats’ which helps us to switch off the stress response. Over time, the amygdala area of the brain (which triggers the stress response) can physically shrink as it is not being activated as frequently.

Researchers estimate that we remember seven times as many negative experiences as positive ones. By training our brains to focus on our positive experiences, we can make ourselves happier and healthier. When we are happy, we release oxytocin – the same chemical that is released when we fall in love, and is present in the mother/baby bond. 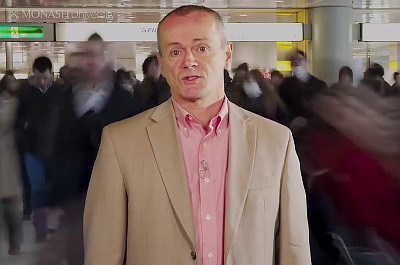 Mindfulness teaches us to be self-compassionate, rather than self-critical. We’ve all had experiences where we’ve made mistakes (eaten some food that was non-OMS compliant, for example).

Rather than beating ourselves up about it, and dwelling on our mistakes, mindfulness teaches us to look at our mistake in a non-judgemental way, learn from the mistake and move on with positivity.

If we can learn and move on, we are less likely to repeat behaviours and make the same mistake again. By cultivating the ‘tend and befriend’ circuits in the brain we can become kinder to ourselves and our focus becomes drawn to the positive rather than the negative.

In turn, the way we treat ourselves can influence the way we treat, and respond to, other people, meaning that our relationships with others can become easier and more fulfilling.

For example, by being truly present in a conversation, we listen more carefully to what another person is saying and respond appropriately, rather than making assumptions about what is being said, which can illicit an emotional response.

One area where this is useful is communicating with people through email – or through the OMS Forum. The written word is hard to decipher as we make assumptions about the tone that the person is using, and our response is often dictated by what we think is being said, rather than by the actual facts.

Meditation and Mindfulness is not something that can be learned over-night; it takes on-going practice and cultivation. In the same way that physical exercise can train muscles, meditation can re-train your brain so new neural pathways are formed and living mindfully becomes second nature.

The all-important phrase to remember is: WHAT IS, not WHAT IF. The good news is that, (A/Prof. Hassed assures us) once the seed of mindfulness has been planted, it remains present, so even something as simple as realizing that you’re not being mindful means that you switch into mindfulness mode.

"We want children to enjoy meditation so that they keep doing it. Meditating as a family with a whole repertoire of meditations to choose from means that children can learn how to use meditation to meet specific needs in their lives."
Dislike 0
0 Likes
0

How the outdoors has helped me throughout my journey with MS

"I have found music mixed with being outdoors to be incredibly healing for me during times of uncertainty with MS. Within the last year I also took up listening to guided meditations."
Dislike 0
2 Likes
1

"Every human being is intrinsically connected to every other human being and also to nature, animals, plants, everything on this planet. But you are often not aware of it because you are too busy with too many things. When that stops for a moment, when you calm down, you realize these connections"

A.G. Ramakrishnan, a professor of electrical engineering and researcher in the fields of meditation and breathing exercises.
Dislike 0
3 Likes
6

The importance of reducing stress

November 4th marks National Stress Awareness Day, so we would like to take the opportunity to reflect on the importance of stress reduction, especially for those who have MS.
Dislike 0
0 Likes
1