Dimethyl fumarate (also known as BG-12, trade name Tecfidera) is an oral treatment approved in 2013 by the US FDA for relapsing forms of MS Make sure you get our 'Live Well with MS' newsletter, with news, tips and inspiration 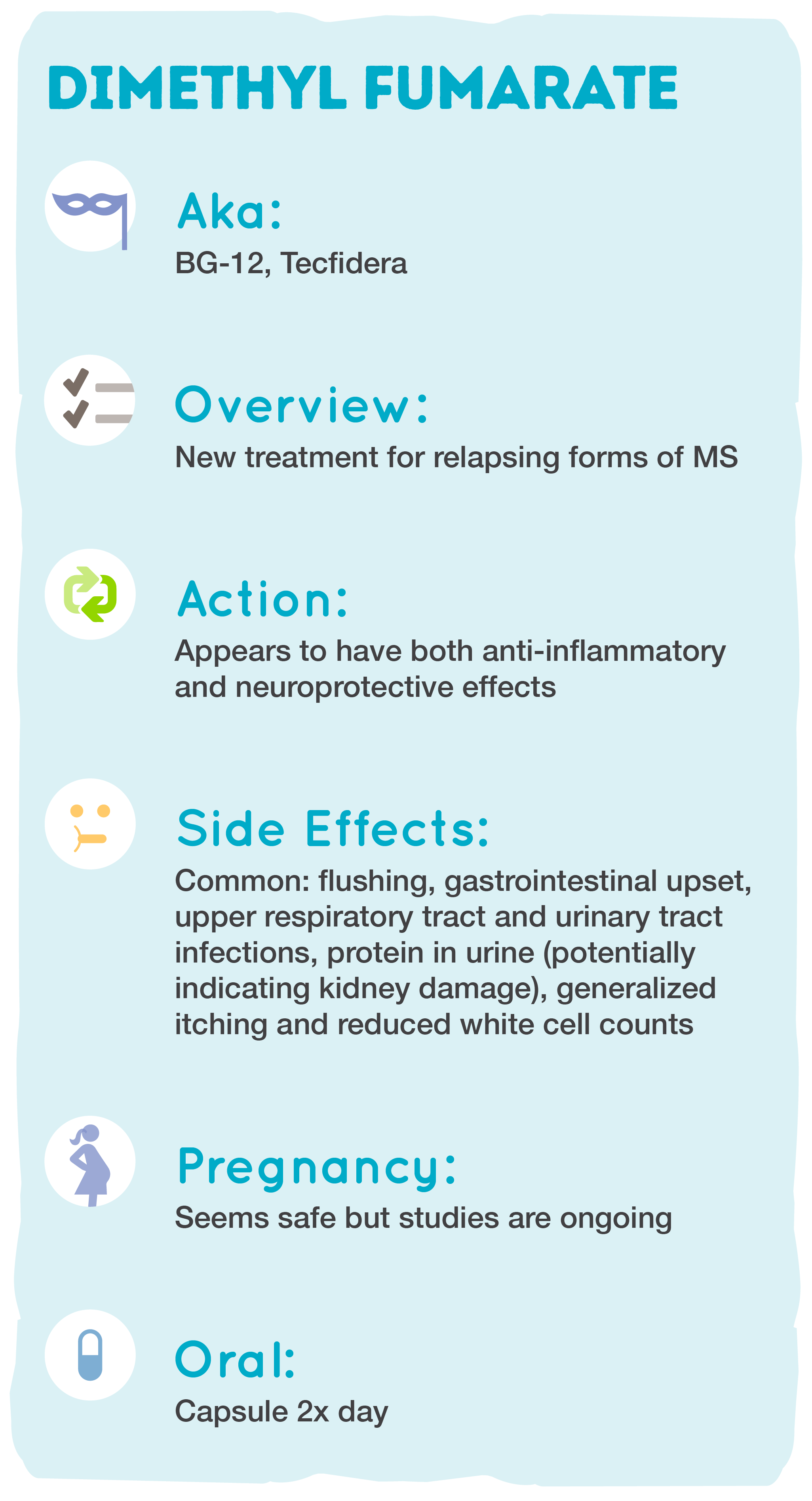 Dimethyl fumarate (also known as BG-12, trade name Tecfidera) is an oral treatment approved for relapsing forms of MS. It is taken as a capsule twice daily and appears to have both anti-inflammatory and neuroprotective effects.

A very similar drug, has been used for many years as a treatment for the skin condition psoriasis, which is also thought to be an autoimmune inflammatory disease.

Two large short-term studies with a maximum follow-up of two years have investigated BG-12’s role in MS. The DEFINE study, published in 2012, followed 1,234 people for up to two years (mean duration was 84 weeks), looking at the proportion of participants who had a relapse. People received either a placebo or BG-12 twice or three times daily. The twice-daily dosage seemed at least as effective as 3 times daily, or even a little better. There was a 53% reduction in relapse rate compared with placebo, and BG-12 reduced the risk of confirmed progression of disability by 38% compared to placebo. Confirmed disability was an increase in more than 1 point on the EDSS scale. There were also markedly fewer MRI lesions for those on BG-12.

The CONFIRM study, which examined 1,417 people with relapsing-remitting MS, was similar in design to the DEFINE study, but an additional group took Copaxone for comparison. The BG-12 and Copaxone groups were evaluated against a placebo. At 2 years, BG-12 taken twice a day reduced the annual relapse rate by 44% compared to placebo. In contrast, Copaxone reduced the relapse rate by 29%. All treatments reduced new lesion formation:

Reductions in disability progression were seen but didn’t reach significance.

Side effects of BG-12

Adverse events were common in both studies and resulted in cessation of treatment in 16% (DEFINE) and 10% (CONFIRM) of those taking BG-12. The most common side effects were flushing, gastrointestinal upset, upper respiratory tract and urinary tract infections, protein in the urine (potentially indicating some kidney damage) and generalized itching. The white cell counts of those taking the medication dropped (white cells fight infection and play an important role in monitoring for cancer). Drops in white cell counts, considered toxic, were seen in up to 10% of those treated with BG-12.

Both studies saw high proportions of dropouts: around 25% in DEFINE and 30% in CONFIRM. This reduces confidence in the studies’ findings; if people withdrew because they were getting worse, only those who were improving remained available for analysis.

Whilst being mindful of their short durations, neither study showed an increased risk of cancer or opportunistic infection (infections commonly associated with a suppressed immune system). Previous data from use in people with psoriasis (PwPs) indicated no issues with immunosupression. The majority of PwPs were treated for short periods only, and BG-12 has yet to be studied in a long-term trial. Immunosuppression is a concern, and cases have been reported of progressive multifocal leukoencephalopathy (PML) found in a person with psoriasis using the psoriasis formulation of BG-12 (with other fumaric acid esters).

In summary, BG-12 has been shown to reduce relapse rates by around 50% over short study periods of up to 2 years, but due to high dropout rates in those studies, the real figure may be somewhat lower.

Side effects such as flushing, gastrointestinal upset and minor infections are common, and the longer-term effects of immunosuppression with BG-12 are not yet known.