Fingolimod (also called FTY720 and Gilenya) is a drug for relapsing remitting multiple sclerosis which works on the immune system. It is taken orally daily. Fingolimod (also called FTY720 and Gilenya) is licensed for use in relapsing remitting MS. Taken once daily by mouth, it has a novel mechanism of action: it works on the immune system, but rather than suppressing it or modifying its function, it binds to a receptor on a proportion of circulating lymphocytes (white blood cells) and reversibly traps them in lymph nodes.

With fewer activated lymphocytes available to get into the central nervous system (CNS), inflammation and myelin damage in the brain and spinal cord are reduced. Because the lymphocytes are reversibly trapped in lymph nodes, they are potentially available if needed by the immune system. 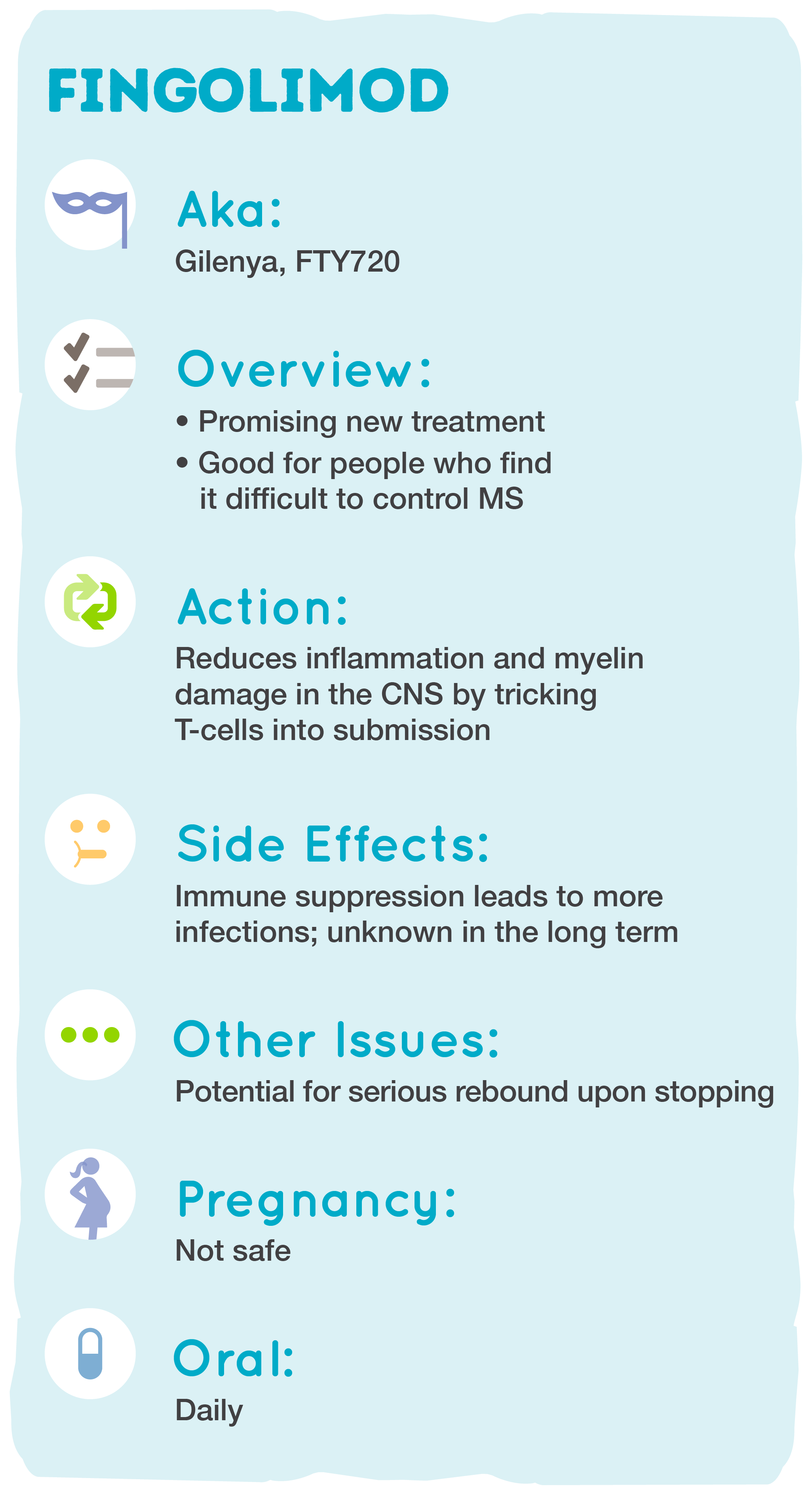 Results of the first MS fingolimod studies were presented at the American Academy of Neurology meeting in 2006. Patients taking both low and high doses of the therapy had more than a 50% reduction in their annual relapse rate during the first 6 months of the study (compared to placebo). This improvement was maintained during a 12-month extension. After 18 months, MRI scans showed that most patients were free of actively inflamed lesions. Side effects were not serious, comprising mostly mild infections like colds, flu and headache.  With the first dose of fingolimod, cardiac monitoring is required, due to risk of an abnormal slow heart rhythm, but if this doesn’t occur with the first dose, no further monitoring is required.

In 2010, large-scale studies of fingolimod versus placebo and fingolimod versus interferon beta 1a were published in the New England Journal of Medicine. In the first study, 1,272 people with recent MS relapses were randomized to fingolimod or placebo. The annualized relapse rate for those on fingolimod was roughly half that of those on placebo, with MRI findings similarly better in that group.

Then 1,292 people with at least 1% relapse were randomized to receive either fingolimod by mouth daily or interferon beta 1a (Avonex) by injection once a week. Relapse rates in the first group were roughly half that of the interferon group. MRI results were similarly better in the fingolimod group. Two fatal herpes infections occurred in the fingolimod group, in keeping with its immune-suppressant mechanism of action.

There is every reason to be optimistic about this new treatment for people who find it difficult to control MS in other ways, although long-term side effects of such immune suppression are unknown. An important positive is that the drug is taken orally, so injections are unnecessary. There are a number of concerns, particularly related to rebound (or worsening) in disease activity on stopping the drug, and harmful effects in pregnancy on the fetus.  Currently it is advised to stop the medication 2 months before trying to become pregnant.