Glatiramer acetate (marketed as Copaxone) appears to trick the immune system into activating certain immune cells normally associated with the damage in MS. Glatiramer acetate is a disease-modifying treatment (DMD) for relapsing remitting MS. Originally called copolymer 1, it has been marketed by the trade name of Copaxone and was approved for use in the US in 1996, Australia in 1999 and the UK in 2000.

It was discovered accidentally in 1968 by Israeli researchers who were trying to synthesize the myelin base protein so they could induce experimental autoimmune encephalomyelitis in animals.

Glatiramer was one of a series of mixtures of amino acids, the building blocks of proteins, which were devised to have properties similar to the myelin base protein. Although these substances did not cause EAE (the animal model of MS), glatiramer stopped mice from getting the disease – and it ‘cured’ mice that already had the disease. 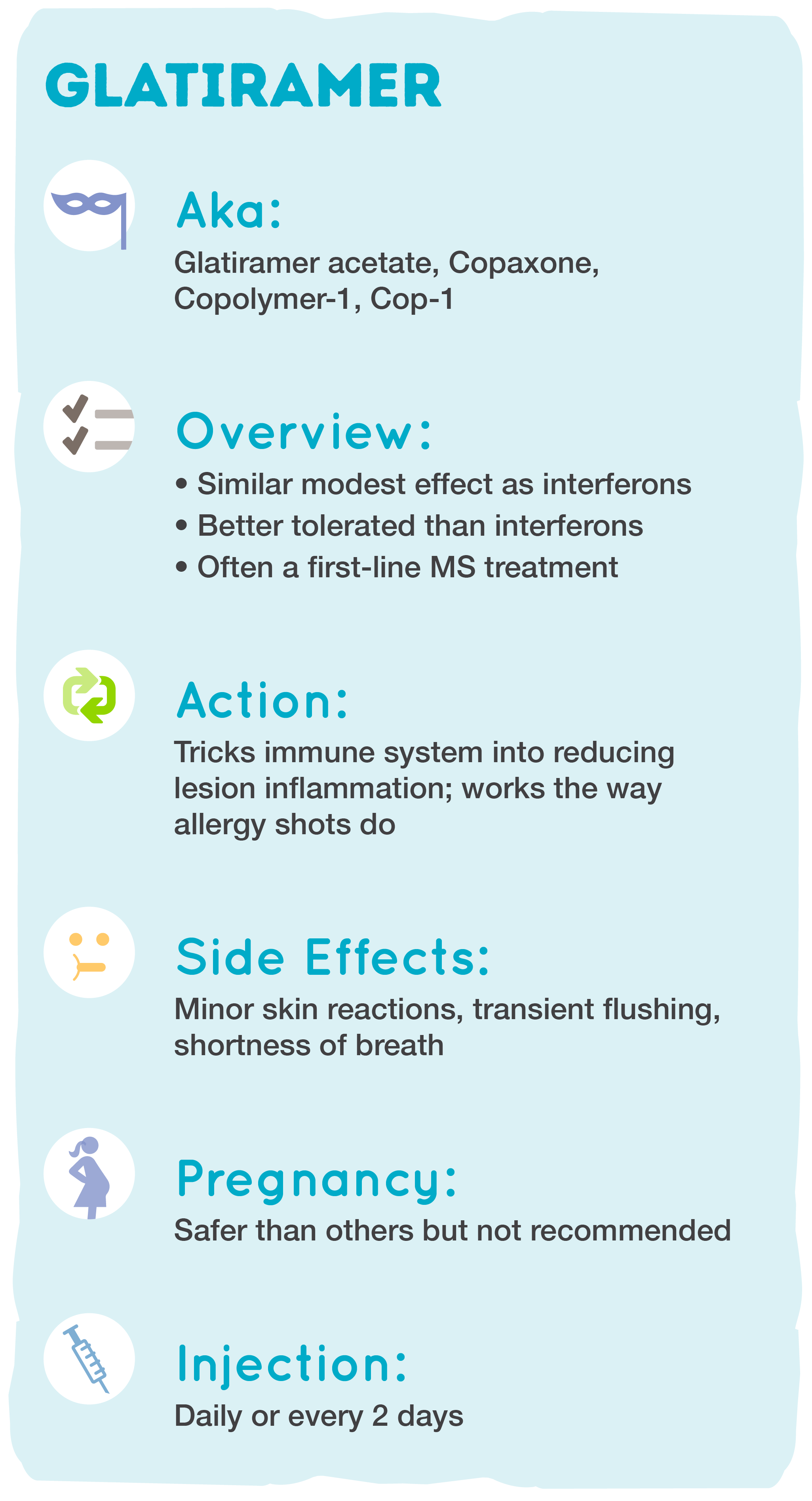 In a sense, it works in the same way as allergy desensitization injections. Research shows that glatiramer shifts the immune system balance from a Th1 (pro-inflammatory) to a Th2 (anti-inflammatory) response. That means the drug is likely to help with other immune-based diseases; in fact, a 2006 study found it helpful in experimental autoimmune liver disease.

Unlike the interferons, glatiramer doesn’t seem to have a general or suppressive effect on the immune system, so it doesn’t make people more susceptible to infections or affect their blood count. Regular blood tests are unnecessary, because the drug has no measurable effects on any other body system. It also seems to reduce production of some of the chemicals responsible for inflammation caused by autoimmune activation.

A major 2-year study by researchers at the Albert Einstein College of Medicine in New York reported improvements in 25 patients treated with glatiramer, as compared to those treated with placebo injections. Patients given glatiramer had a 76% reduction in relapse rate (down from 1.35 to 0.3 attacks per year). The percentage of patients who remained relapse-free over the 2 years in the treated group was more than double (56%) that of the placebo group (26%).

It was then decided to test the drug on 106 patients with chronic progressive MS, as opposed to relapsing-remitting MS. This form has been particularly difficult to treat, and glatiramer failed to show any benefit (although in 1 of the 2 centers treating patients, there was a significant difference between glatiramer and placebo).

The pivotal study was performed by researchers in Baltimore, using 11 major centers in the US. They performed a well-constructed randomized controlled trial (RCT) in which 251 patients with MS were either treated with glatiramer or with inactive placebo for 2 years. As in the interferon studies, there was about one-third (29%) fewer relapses in the treated group (0.59 versus 0.84). Treatment with glatiramer suggested a slowing of the progression of disability, a result unlike those found in most interferon studies. Although this was not shown with the usual measures of disability, the authors analyzed the number of patients who got worse, were unchanged, or improved, and found that glatiramer produced significant benefit. After 2 years, the glatiramer patients’ EDSS scores had improved by 0.05 points, whereas the placebo patients’ scores had worsened by 0.21 points.

There were relatively few side effects and no abnormalities detected on blood tests. Most patients developed antibodies to the drug, but unlike those developed in response to the interferons, these antibodies did not interfere with glatiramer’s effect. In an 11-month extension of the trial, the effects of glatiramer improved, with the relapse rate further reduced for a total of 32%. Follow-up for more than 5 years showed that the effects held steady or even increased. At the end of the 5 years, the relapse rate was reduced to 0.16 a year in those patients taking glatiramer. This represents a relapse only once every 6 years.

In 1999, MRI data from the pivotal study showed a 35% reduction in the number of brain lesions. A small study of 10 patients comparing the rate of new lesions with their rates before treatment showed uncertain improvement.

The European-Canadian MRI study clarified this further. This major RCT enrolled 239 patients with relapsing-remitting MS. The patients had had MS for about 8 years on average, with a mean EDSS of 2.4 and an average relapse rate in the previous 2 years of 2.7 per year. Patients had MRI scans every 4 weeks. After 9 months in the study, patients taking glatiramer had 29% fewer new MRI lesions, and about 50% lower total MRI disease burden. The clinical relapse rates, unlike those in the interferon studies, also correlated well with the MRI changes. Patients taking glatiramer had 33% fewer relapses. It took some 3 months before any beneficial effect was seen, and 6 months before this difference between glatiramer and placebo was significant. The effect seemed to increase the longer patients were on the drug.

There has now been considerable experience with glatiramer. Patients from the original 251-patient pivotal study have been followed for 6 years, with interesting results. Now that 205 of these patients have been studied, we see that the longer they remained on the drug, the greater the benefit. Patients continually on the drug for 6 years had an annual relapse rate in the sixth year of 0.23, or roughly 1 relapse every 4 to 5 years. This is markedly less than their starting relapse rate.

Significantly, approximately 70% of patients continually on the drug for 6 years were either the same in terms of disability as when they started, or were somewhat better. The same research group looked at patients from the original trial of 251 patients 8 years later, and compared those who started on glatiramer and continued to those who started on placebo, but at the end of the trial were started on glatiramer. This 30-month delay in starting glatiramer was associated with a significantly smaller proportion of patients remaining stable in terms of their EDSS scores.

Similarly, the European-Canadian study has been followed up over the long term, now for a mean time of 5.8 years, for nearly two-thirds of the original study group. In this study, the control group who originally took placebo were treated with glatiramer after 9 months along with those in the treatment group, so effectively this group had a delay of 9 months before starting glatiramer.

A 2005 MRI study showed that for patients in one of the major glatiramer trials, the reduction in lesions after treatment with glatiramer ranged from 20% to 54%.

Taken together, all of these results suggest that glatiramer therapy perhaps ought to be more widely prescribed than it is.

90% of patients receiving glatiramer in the Baltimore study experienced skin reactions, and 15% had a transient flushing feeling with palpitations and shortness of breath. There were no serious side effects however. These rates were somewhat lower in the European-Canadian MRI study, and again there were no serious side effects. In particular, the flu-like symptoms, so commonly seen with the interferons, are rarely seen with glatiramer.

Research reported to the American Academy of Neurology meeting in April 2003 suggested that this is unlikely to be the case with glatiramer.

Among the 215 pregnancies that occurred while patients were on this treatment, the incidence of abnormalities or pregnancy loss was no higher than usual. This is at least reassuring for women on glatiramer who unexpectedly become pregnant.

Glatiramer currently requires a daily injection, which puts some people off and leads them to opt for the interferons, which may be given every other day or even weekly. We are still unsure of the optimal dosing for this treatment. There is some evidence that injecting every second day is just as effective as daily injection, and this should be investigated further.20

Doubling the dose is also being explored. Investigators from Ohio randomized people with MS to standard-dose or double-dose glatiramer given in the usual manner, subcutaneously every day.21 They found evidence suggesting the double dose was more effective: the double-dose group had a longer time to first relapse and a higher proportion of relapse-free subjects.

Researchers examined whether glatiramer might be taken orally. Initial work in animals was highly positive, suggesting that oral glatiramer would be equally effective. But when it was published in 2006, the study of 1,651 patients showed no improvement at either a low or a high dose of oral glatiramer. This effectively rules out oral glatiramer for MS.

Many authorities now recommend glatiramer as a first-line treatment for MS, equivalent in its effect to the interferons.

Given that the side-effect profile is superior and that the glatiramer studies were properly blinded and hence more likely to be valid than the interferon studies, it should perhaps be considered over the interferons.  It is likely to be better tolerated and just as effective if not more so.

Interferons appear to take about 1 to 2 months to be effective, versus 3 to 6 for glatiramer, and this may be an issue if the disease is particularly active. However, most patients starting on these therapies have just finished a course of steroids for a relapse or first attack, so they get some protection from the steroids for a period of time.

Overall, glatiramer appears to be a safe and modestly effective therapy for MS, with few side effects.

To avoid site reactions with subcutaneous injections, it is important to use the correct injection technique. In this video, Prof. Jelinek shows how to inject correctly.

Many people injecting subcutaneous (SC) medication for MS develop site reactions such as lumps, wheals, itching, redness or bruising. This is usually due to injecting too deeply (into muscle) or too shallowly (into the skin itself).

The right place to inject subcutaneous medication is just below the skin, in the space between skin and muscle. This space is hard to find reliably if the skin is stretched out during injection. Picking an area where there is some fat under the skin, such as the abdominal wall, the skin must be grasped between thumb and middle finger and lifted.

Introduce the needle perpendicular to the top of that wad of skin and insert it all the way. If you’re using an auto-injector, set the depth at maximum, because lifting that piece of skin guarantees the injection will not go too deep (if you’re using the standard needle provided for Copaxone injections).

Inject the medicine relatively slowly, because a rapid injection causes pain. Once it’s all in, remove the needle quickly and let go of the skin.

Dispose of the syringe and needle carefully. Most people do not require heat or cold packs with this technique, and very few develop any site reactions.