A potent agent related to those used in chemotherapy, mitoxantrone (also called Novantrone) is similar to drugs used for acute leukemias and lymphomas. For treatment of patients with aggressive forms of MS and secondary progressive MS This drug is similar to those used for acute leukemia and lymphomas. Mitoxantrone (trade name Novantrone) is a powerful suppressant of the immune system, and has also been trialled in multiple sclerosis. 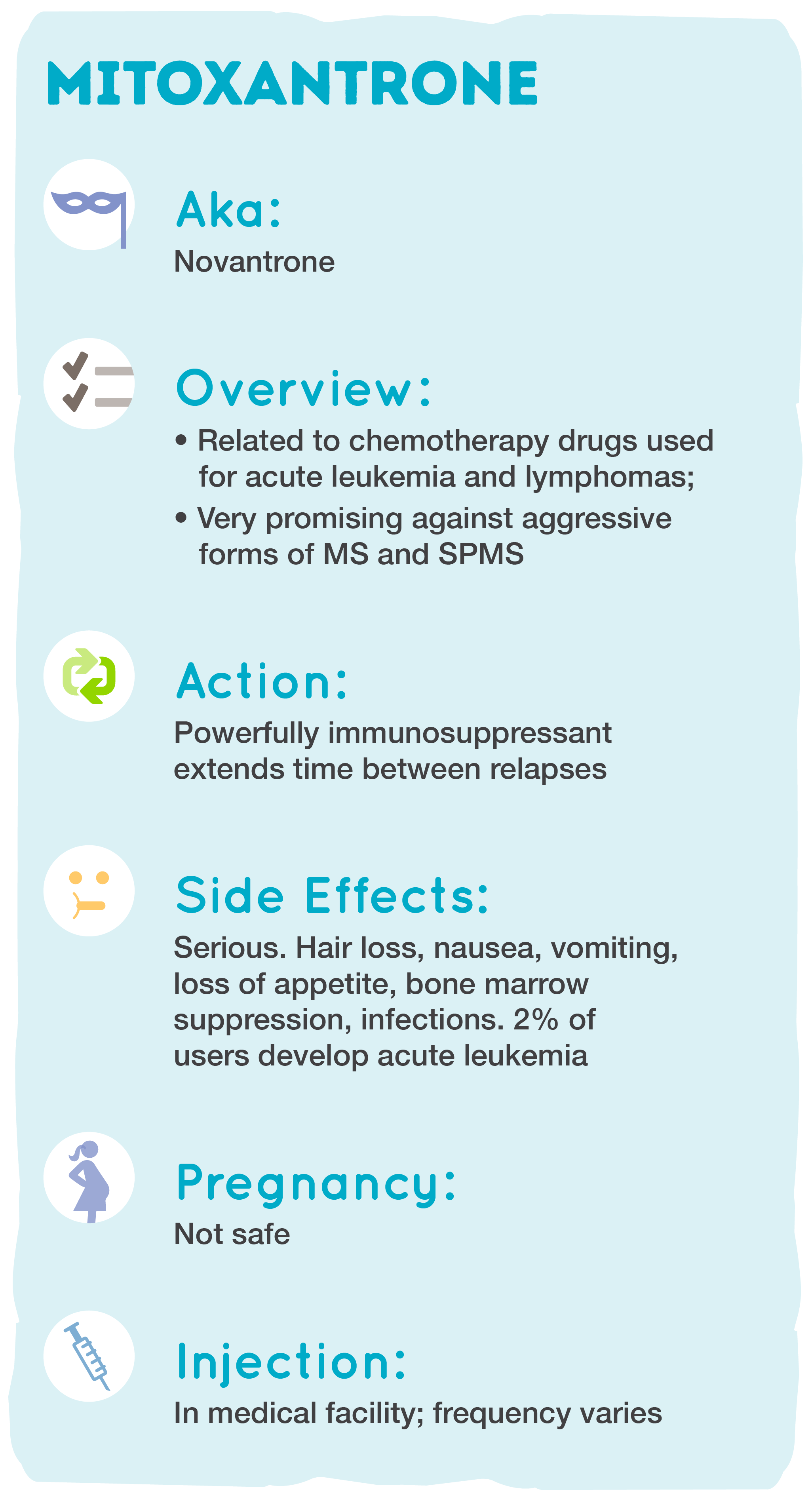 A RCT of 51 patients randomly selected to receive mitoxantrone or placebo once a month intravenously, found that after two years there was a major reduction (66%) in the number of relapses in the treated group, and a significant reduction in the proportion of patients with confirmed disease progression.

Forty-two patients with clinically very active, progressive disease were randomly allocated to the two groups. After six months, there were very large differences between the groups.

Ninety percent of the mitoxantrone plus steroids group had no new MRI lesions, versus only 31% of the steroids-only group.

There were also significant improvements in the disability score for patients in the mitoxantrone group at months two through six, with a final mean improvement of more than one point.

Additionally, there were significantly fewer relapses (seven compared to 31), and more patients had not relapsed (14 versus seven) in the mitoxantrone group.

Five patients in the steroids-only group dropped out of the trial because they were deteriorating so badly.

In 2002, the Lancet reported a large study of mitoxantrone in patients with secondary progressive MS, which has been very difficult to treat.

The study randomly allocated 194 people with secondary progressive MS to treatment with this drug or to placebo. The drug was given intravenously every 3 months for 2 years.

Importantly, there were no serious side effects or cardiac problems, which have been a concern with this drug. These studies together are significant.

Together they show that even advanced MS can be brought under control with the use of this powerful immunosuppressant drug.

Unfortunately, this drug’s side effects include hair loss, nausea, vomiting and loss of appetite. Bone marrow suppression is common, which makes people more susceptible to infections.

Indeed, the chemotherapy may itself precipitate cancer; in the long term, the incidence of cancers in people treated with this drug is likely to be higher than in the general population.

Research published in 2009 suggests as many as 2% of people develop leukemia within three to four years of taking mitoxantrone.

This is a serious concern, because adult leukemia is often fatal. Heart muscle toxicity has not yet been seen, although it is often seen in related drugs.

An influential Cochrane Database Systematic Review in 2005 concluded that mitoxantrone is moderately effective in reducing relapse rate and disease progression in relapsing-remitting, primary progressive and secondary progressive MS in the short terms studied to date (2 years), although longer trials are needed.

No major side effects related to cancer or cardiotoxicity were reported from the trials studied.

Mitoxantrone MS treatment shows promise for treatment of patients with aggressive forms of MS and secondary progressive MS who would otherwise rapidly deteriorate or have few treatment options.

There are concerns about its safety, especially with long-term use: a 2006 review concluded that mitoxantrone benefits outweigh its risks, especially for people not responding to the usual disease-modifying therapies.

Indeed, a South American study showed that for patients deteriorating despite treatment with interferon beta, mitoxantrone safely stabilized their condition.

A 2007 study in 45 people with early but very active MS showed that mitoxantrone effectively stabilized their condition – though one of the patients developed leukemia shortly after treatment.

Further trials are needed, but this drug should not be considered for the average person with MS. If the disease becomes very active and progressive, mitoxantrone may offer some help, albeit at a cost.

Many neurologists will be concerned about potential cardiotoxicity when deciding whether to prescribe this drug. Researchers are currently working on analogs of mitoxantrone, such as pixantrone, which do not possess similar cardiotoxicity.