Natalizumab (also called Tysabri) is a potent therapy for treating very active relapsing remitting MS. Treatment is given through an intravenous infusion every four weeks. Natalizumab, also known as Tysabri, is an important addition to the therapies available for treating very active multiple sclerosis (definition: two or more relapses in one year, with signs of increasing or new lesions between two consecutive MRI scans) 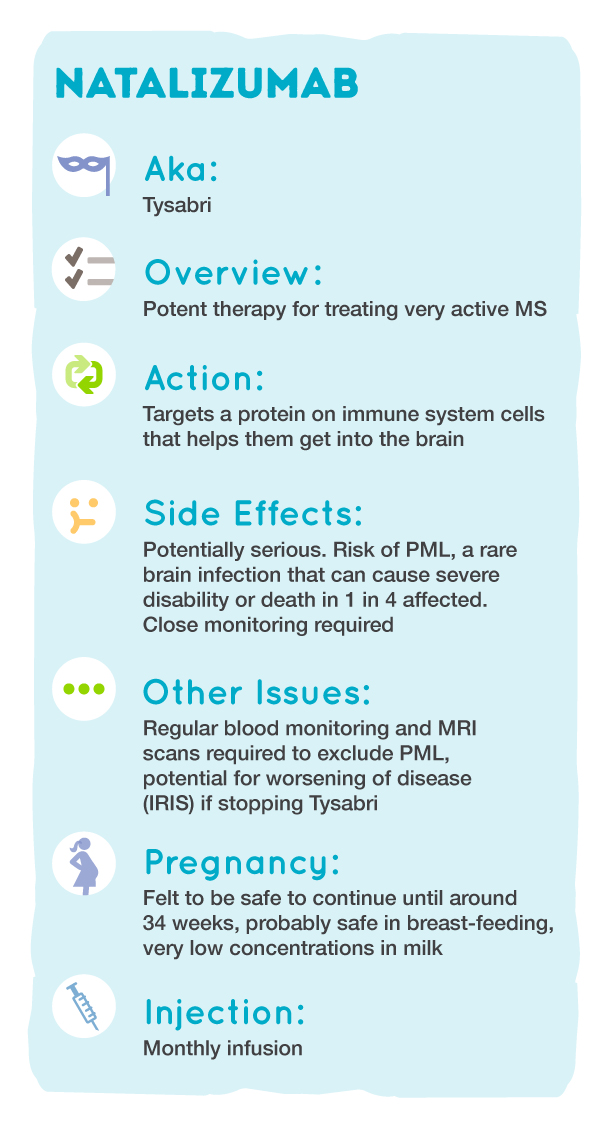 How does Natalizumab work?

Natalizumab specifically targets alpha 4 integrin - a protein present on the surface of immune system cells. By inhibiting this protein it prevents white blood cells form crossing the blood-brain barrier, thereby reducing the attack of myelin in the brain and spinal cord.

In a 2003 study published  in the New England Journal of Medicine, a randomised controlled trial on Tysabri in MS randomly assigned 213 patients to receive a low dose, high dose, or a placebo.

The drug was given intravenously once every 4 weeks for 6 months. Patients were followed with MRI scanning and clinical assessment, which found at the end of the 6 months that:

Twice the number of patients in the placebo group had relapses than in either of the treatment groups.

Those taking the drug generally reported improvement in their sense of well-being, and those in the placebo group reported the reverse.  This suggests the drug is well tolerated and its side effect profile is favourable.

On average, Tysabri reduces relapses by around 70%, compared to those taking placebo, with evidence for slowing of disability accumulation.

Side Effects of Natalizumab

Common side effects at the time of the infusion include dizziness, inflammation of the nose and throat, nausea, vomiting, skin rash, urinary and respiratory tract infections. Tysabri may affect liver function but this generally recovers once treatment is stopped.

Treatment with Tysabri may increase the risk of developing the uncommon brain infection progressive multifocal leukoencephalopathy (PML). This is caused by the John Cunningham (JC) virus, which is carried by 50-70% of the population, and is usually kept under control by the immune system, causing no problems.

When the immune system is intentionally compromised by Tysabri however, the virus can potentially activate and cause inflammation and damage to the brain.  There is currently no treatment, and If someone develops PML, the risk of severe disability or death is 25%.

A blood test can detect the JC virus and give an indication of the risk that you might develop PML.  If someone tests negative for JC virus, the risk of PML is approximately 1 in 10,000. If the test is positive, the average risk is 1 in 500, increasing after 2 years of treatment.  Another factor which increases the risk of PML is previous treatment with an immunosuppressant drug (e.g azathioprine, cyclophosphamide, mitoxantrone or methotrexate)

Your neurologist or MS nurse will discuss the JC virus blood test and how it may affect the benefits and risks of treatment.

When you start taking Tysabri you will be informed of the early signs and symptoms of PML. These can be similar to an MS relapse, so it is important to report any new or worsening symptoms. If PML is suspected at any point during treatment, the drug will be discontinued immediately.  You will have regular blood tests and MRIs to detect any early changes that may indicate PML.

If treatment with Tysabri is stopped, there is a chance that your MS may become worse than before starting treatment.  This is known as rebound or immune reconstitution inflammatory syndrome (IRIS). At present there is much research into which if any of the other MS treatments may be effective in preventing this, with fingolimod and ocrelizumab commonly being used in practice. Interferons (Avonex, Rebif and Betaferon or Betaseron) belong to a class of messengers that play a role in regulating the immune system. These are used in the treatment of multiple sclerosis.
Read More Daclizumab (trade name Zinbryta) was a disease modifying drug (DMD) licensed for the treatment of relapsing remitting MS.  It was released in 2017, but withdrawn worldwide in March 2018, due to severe and previously unknown side effects.
Read More