Why steroids are prescribed for treating MS

Steroids have been used for MS relapses for many years. Most neurologists prescribe them for acute relapses in people with relapsing-remitting MS.

The evidence seems clear that they shorten recovery time from individual relapses. This contrasts with other currently available agents, none of which appears to have much effect on improving recovery from an acute relapse. 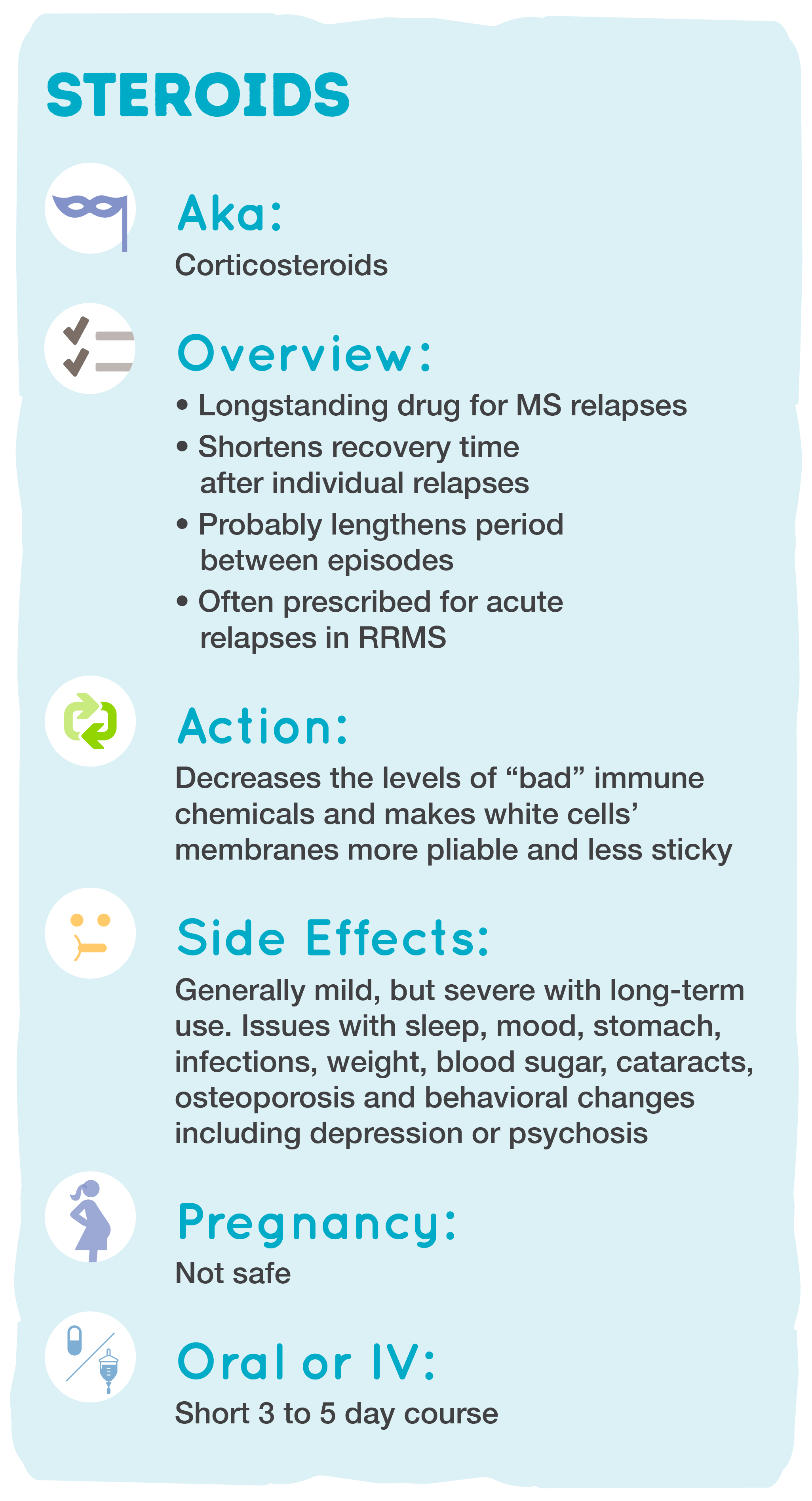 For instance, natalizumab potently affects the relapse rate in MS, but it has no effect on recovery from an acute relapse. What is not clear about steroids is:

‘Steroids’ is the accepted shortening of the term corticosteroids.

Steroids in general are found naturally in plants and animals, but corticosteroids are those steroids secreted into the bloodstream by the adrenal gland. Many are now also synthesized in the laboratory.

Studies of people being treated with steroids for MS relapses show that steroids work by decreasing the levels of the ‘bad’ immune chemicals while making the white cells’ membranes more pliable and less sticky (note how similar this is to the mechanism by which diet and essential fatty acids supplements work – but those have no side effects).

Other evidence suggests steroids affect how the brain interprets messages coming from the body’s nerves.

MRI studies show that steroids significantly decrease the amount of swelling around individual MS lesions, causing better nerve transmission through these affected areas. These effects are seen on MRI within hours of taking the first dose.

Side effects of steroids when used for treating MS

Steroids are safe for MS when used in short courses of five to seven days or less. A few rare cases of bone problems have been reported, but these are exceedingly unlikely.

When used continually on a long-term basis, they can cause serious problems including weight gain, fluid retention, muscle weakness, cataracts, osteoporosis, increased risk of infection or stomach ulcers, and changes in behavior, including depression or psychosis.

Long-term use is not a good idea in any condition, unless there is no real alternative.

RCTs of steroids in MS

Studies over many years have shown that intravenous steroids provide a beneficial effect in recovery from acute relapses in MS. Milligan and colleagues randomized 50 patients to receive either methylprednisolone (MP) 500 mg intravenously (IV) for five days or inactive placebo.

Assessments were carried out by a ‘blinded’ neurologist at one and four weeks after the treatment; 73% of MP-treated patients had improved, compared to just 29% of those on placebo.

This study caused most neurologists around the world to subsequently offer patients IV MP for relapses.

Although most inflammatory diseases for which steroids have been used have shown similar benefit for IV and oral routes of administration, most neurologists have used steroids for MS only by the IV route. This seems to have stemmed from the results of a study by Beck and co-workers in the early 1990s.

They studied the use of steroids in optic neuritis, wherein the nerves to the eyes become inflamed, causing visual disturbance. Most people who develop this condition eventually get MS. Beck and colleagues showed that IV MP seemed to delay the development of MS in these patients longer than oral MP did.

While this may have been a quirk of that particular study, it turned out to be very influential: After the study was published, most neurologists tended to give only IV steroids – even to people who had typical MS relapses and not optic neuritis.

This was first challenged by the results of a small study of 35 patients, which showed equivalent benefit for oral and IV steroids.

There was no difference between the groups in terms of degree of neurological improvement at 1, 4, 12 or 24 weeks after therapy. Indeed, there was a slight trend to better results for the orally treated group.

In Copenhagen, Sellebjerg and co-workers randomized 51 patients with an acute relapse of MS lasting less than four weeks to receive either placebo orally or oral prednisolone 500mg per day for five days, followed by a tapering-off dose.

Patients receiving steroids also rated their symptoms as having improved much more at three and eight weeks. No significant side effects were noted.

This study confirmed the very significant improvements steroids can provide during a relapse. Most doctors now offer this therapy for a relapse.

There is still considerable debate about the optimal dosage and duration of steroids for MS. Most neurologists use them for selected relapses, and about 50% use them for all relapses.

Similarly, there is a lot of variation in whether oral or IV steroids are usually used. UK neurologists overwhelmingly favor IV, despite the above evidence that oral is likely to be just as effective.

More than 90% use IV steroids, and only about 5% routinely use oral steroids.

The oral and IV doses have been shown to be roughly equivalent in terms of biological availability.

It is possible that the course of steroids is more effective if given at night.

Because the body has a natural rhythm of steroid secretion, varying between day and night, Israeli researchers compared outcomes and side effects of steroid therapy for relapses, giving one group of people with MS the treatment during the day and administering the treatment at night to the other group.

The night-time group had better outcomes with fewer side effects, and patients expressed a clear preference for night-time treatment.

Most neurologists treat only some MS relapses with steroids. They argue that only severe attacks likely to leave some disability should be treated.

From a patient’s point of view, all relapses can leave lasting and distressing symptoms (even if they’re only disturbances in sensation), and some sensory lesions may result in long-term pain.

That is why many authorities favor treating most relapses, unless they are very frequent, in which case a maintenance immunosuppressant medication might be best.

The NICE guidelines recommend treating ‘an acute episode sufficient to cause distressing symptoms or an increased limitation on activities.’ Just what constitutes ‘distressing’ is up to the patient.

It may be a good idea to discuss with your doctor the possibility of keeping a dose of steroids at home in case of a relapse, and also clarifying which symptoms might warrant starting the course.

It can take a while to get in to see a neurologist, and the earlier these drugs are started in a relapse, the more effective they are likely to be.

Many patients and their neurologists will be comfortable with this approach, although not everyone feels confident enough to decide what exactly constitutes a relapse. Fingolimod (also called FTY720 and Gilenya) is a drug for relapsing remitting multiple sclerosis which works on the immune system. It is taken orally daily.
Read More