Teriflunomide (trade name Aubagio) was approved by the US FDA in 2012 for the treatment of relapsing forms of multiple sclerosis. It is taken daily as a tablet. Teriflunomide (trade name Aubagio) was approved by the US FDA in 2012 for treatment of relapsing forms of MS.

It is taken as a tablet once daily. While its exact mechanism of action is unknown, it reduces the number of immune cells involved in the MS response (it is known to reduce proliferation of lymphocytes by blocking a certain enzyme). 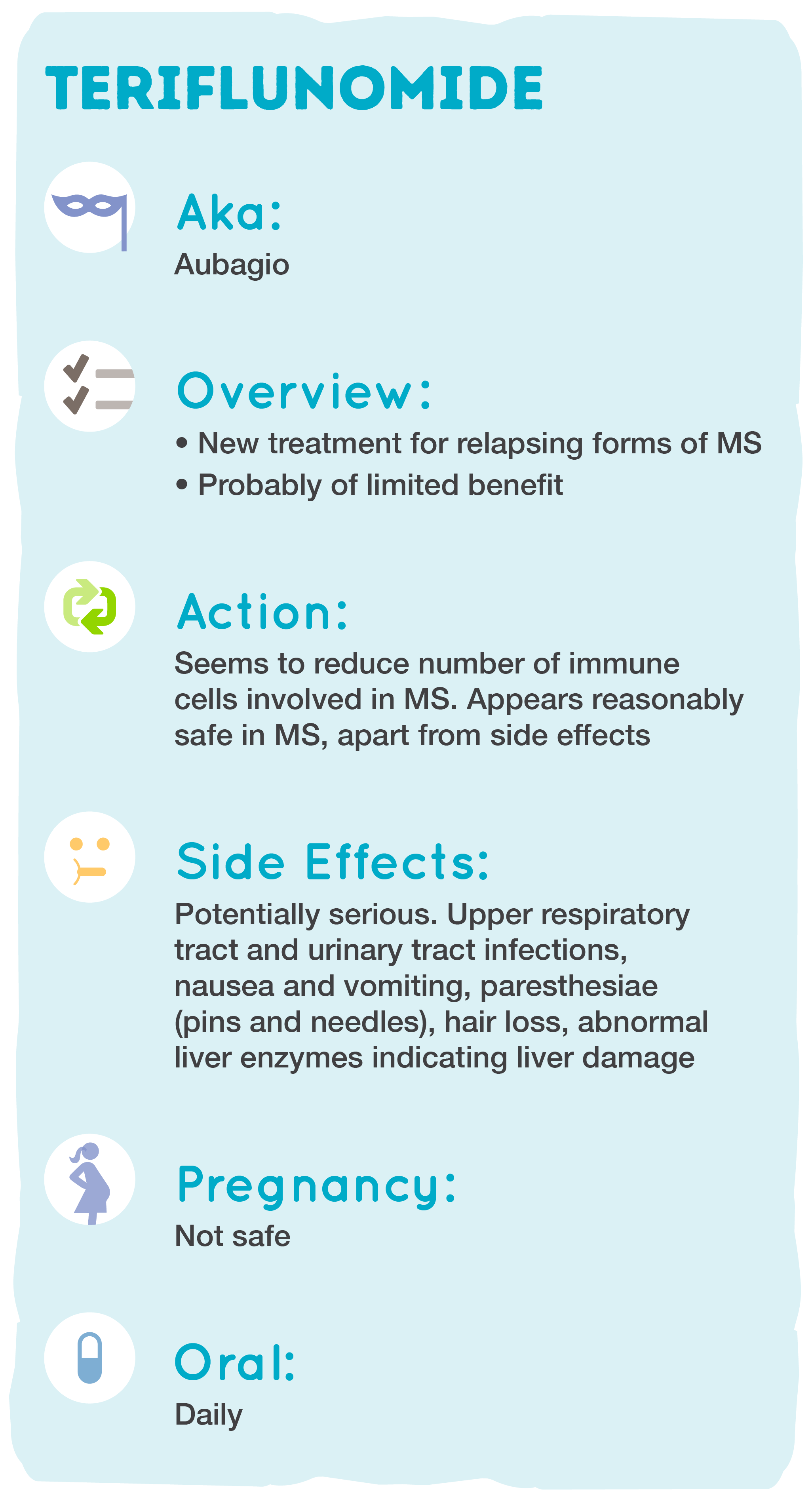 Teriflunomide is the active metabolite of leflunomide, which is used in the treatment of inflammatory arthritis.

Because we have limited experience to date with the use of teriflunomide, it is important to consider the side effects of the parent drug and the potential that these may also apply to teriflunomide.

Those taking leflunomideare are advised to avoid alcohol, live viral vaccines, and other drugs that affect the immune system.

Teriflunomide itself has been the subject of a number of drug company-funded randomized controlled trials. The first of these, the TEMSO (Teriflunomide Multiple Sclerosis Oral Trial), was published in 2011 in the New England Journal of Medicine. It studied 1,088 people with MS who were randomly assigned to either placebo or 7mg or 14mg of teriflunomide and then followed for 108 weeks. Drop-out rates were around 30% for all 3 groups. The primary outcome measure was annual relapse rate: there was around a 30% reduction in annual relapse rate in both treatment groups, with a trend for reduced disability progression in the treatment groups, although these differences weren’t significant. There was no difference in fatigue levels between the 3 groups.4

In 2012, Freedman published a study investigating the safety and efficacy of teriflunomide as an add-on therapy to interferon beta.

All studies of teriflunomide in MS have been reviewed by an independent Cochrane review. Its authors were ‘unable to give any clear recommendations for the use of teriflunomide as a disease-modifying therapy for MS because the studies had limited quality, were of short duration and were funded by a pharmaceutical company.

They added that there is ‘low-level evidence for the use of teriflunomide as a disease-modifying therapy for MS due to the limited quality of the available randomized controlled trials. However, both teriflunomide 7mg and 14mg have potential benefits, alone and with add-on interferon beta 1a, and the review shows it to be safe for patients with relapsing forms of MS in the short term.’

The authors cited concerns over the high dropout rates in both studies, although these were lower than in studies of many other MS drugs.

In the Freedman study, they cited a lack of information about why people dropped out, as well as a lack of clarity over how participants were randomized into groups, what the criteria were for excluding people for the trial extension, and how this was blinded. This information was requested by the Cochrane reviewers but not provided by the researchers or by Sanofi (the company sponsoring the trial).6

It is also important to note that Aubagio has been shown in animal studies to significantly increase the risk of fetal abnormality, and the manufacture advises avoiding pregnancy for 2 years after stopping the drug.

As many with MS will be females at the stage in their life when they are considering starting a family, this significantly limits its use.