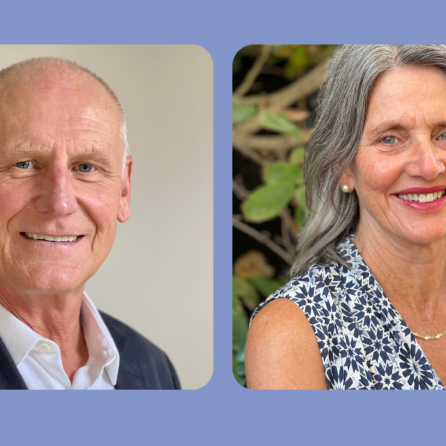 We are pleased to welcome back Professor George Jelinek, creator of the OMS program and one of the three editors of this new, highly anticipated book. We also very pleased to welcome back to the podcast Associate Professor Sandra Neate, Head of the Neuroepidemiology Unit at the University of Melbourne, and another of the three editors of the new book.

Click here for a full transcript of this episode.

Professor George Jelinek is the founder of the Neuroepidemiology Unit (NEU) within the Melbourne School of Population and Global Health at The University of Melbourne and Honorary Professor at NEU. The NEU's charter is to investigate the modifiable lifestyle risk factors that predict the progression of MS with a view to refining a preventive medicine approach to management of the disease.

Associate Professor Sandra Neate is a Senior Principal Clinical Research Fellow and the Head of the Neuroepidemiology Unit. She has also been a facilitator on Overcoming Multiple Sclerosis events.

Sandra completed her medical degree at the University of Melbourne in 1985. Sandra went on to train as a Specialist Emergency Physician with the Australasian College for Emergency Medicine working as an emergency physician for 20 years at St Vincent’s Hospital Melbourne. She has also worked at the Coroners Court of Victoria since 2010 and on the Victorian Mental Health Tribunal since 2015.

Sandra’s interests moved towards research, and she has published in areas regarding coronial matters and family experiences of organ donation. She commenced at the Neuroepidemiology Unit, along with George, in 2015 and now leads the team and their major research projects, the HOLISM study, the STOP MS study, investigating the outcomes of people who have attended residential lifestyle modification workshops, and the Multiple Sclerosis Online Course trial among others.

In 2021 Sandra and George won the Melbourne School of Population and Global Health Engagement Award in recognition of their work and research with the MS community.

Sandra is one of the editors, along with Professor George Jelinek and Associate Professor Michelle Donoghue of the newly published ‘Overcoming Multiple Sclerosis Handbook, A Roadmap to Good Health’.

Coming up on our next episode:

On the next episode of Living Well with MS, join us for the next installment of our Coffee Break series, where we meet Claes Nermark, a health coach, personal trainer, and the first OMS Circle ambassador in Sweden. Premieres February 14, 2022 on your favorite podcast platform.

Subscribe to this podcast and never miss an episode. You can catch any episode of Living Well with MS here or on your favorite podcast app. For your convenience, a full episode transcript is also available on all platforms within 48 hours of each episode’s premiere. If you like our program, don’t be shy and leave a review wherever you tune into the show. And feel free to share your comments and suggestions for future guests and episode topics by emailing podcast@overcomingms.org.

S4E62 10 mins with George: Learnings after following the program for years and the future

S4E62 10 mins with George: Learnings after following the program for years and the future

S4E62: 10 mins with George – Learnings after following the program for years and the future
Dislike 0
0 Likes
0