Karin Robertson one of our featured artists for our Don’t Send Me A Card e-cards. She shares how she uses crafts, such as Sashiko, to represent her experiences.

Early in 2014, Karin Robertson went to her GP with tingling in her left hand. It didn’t go away, so she was referred to the World Federation of Neurology. She also had a ‘lead arm’ – when she started to exercise or wash her hair, her left arm felt like someone was pouring lead into it. She could feel and move it, but it didn’t feel like part of her. It caused sleepless nights and it would come and go. It wasn’t carpal tunnel, so she had an MRI, which showed lesions.

The neurologist told her “one swallow doesn’t make a summer… but we have a couple here.” When Karin spurted out “do I have MS?” her neurologist simply replied, “let’s get you a hospital stay sorted so we can check everything out.” Karin left his office and cried in the parking garage. For two weeks between her MRI and hospital stay, she thought she may die prematurely from her condition. The hospital stay confirmed that Karin did indeed have MS. Karin’s hospital roommate also had MS. She had a bit of trouble walking and was there for a regular bladder-related procedure. She had been diagnosed 20 years earlier, had a daughter and travelled. While life wasn’t always easy, she had a good life. Karin was grateful to have met her and felt hopeful about her own future.

Karin has always liked to make things. Now and then ideas just come to her, and she feels like working with her hands, drawing inspiration from someone else’s work or materials she has around her. Sometimes her projects serve to solve a problem or repurpose objects. Her work often features patterns with a message behind the shapes. She came across sashiko searching for information on another craft and curiosity lead her to experiment with the technique. Sashiko is a Japanese embroidery technique first used in the Edo period. Translating to ‘’Little Stabs,’’ it traditionally features white or red stitching on blue fabric. Originally used to attach patches to worn clothing, it evolved into decorative geometric patterns commonly featuring mountains, plants and feathers. 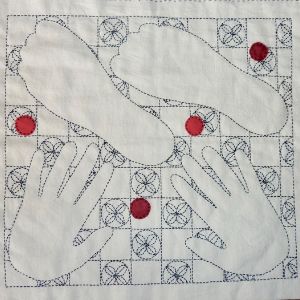 Karin stitched this design while she was in the process of being diagnosed to represent the experience. This piece was a reaction to a brain function test she had during her MS diagnosis process. She was hooked up to a machine and was told to keep looking at the red dot regardless of what else was going on. The hands and feet are stitched into this work because the symptom that led Karin to her GP initially was a persistent, light tingling in her left hand and left foot. After a quick sketch on paper, she began to stitch her Sashiko-inspired piece on calico and felt.

Six months passed between her first tingling sensations and her diagnosis. She decided to take Copaxone preferring the daily injections to the unpleasant-sounding side effects of the other option she was offered. She stayed with Copaxone for five years and then very, very slowly started reducing it until March 2021 when she injected it for the last time. She initially wanted to throw everything she could at the situation, but after a while, she wondered about the value of Copaxone for her as it was the biggest downside of having MS. The tingling had become barely noticeable mostly, especially compared to the daily bee-sting experience of injecting her DMT. 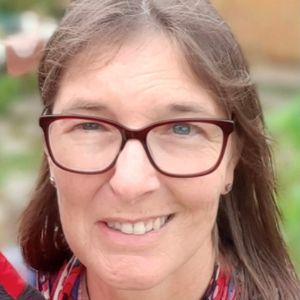 Karin has absolute faith in OMS. She came across the program just after her diagnosis and thought it made perfect sense. Pre-MS she was heading towards a vegetarian lifestyle anyway, so it wasn’t a huge mind-shift to adopt the OMS diet part of the program. She is whole food plant based now, choosing not to eat egg whites or fish. Along with being introduced to documentaries like Cowspiracy and Forks Over Knives, she has gotten into the “let food be thy medicine” world. Dr Greger has been a huge influence on her diet, too. She says, “OMS gave me the solid ground I needed for hope. MS and OMS have shaped me in many ways for the better.”

Karin and her husband, Ian, were lucky enough to go to the first OMS retreat in Europe. “It was life changing, even more so for Ian. We met the most wonderful, supportive people from all over, with different symptoms and levels of mobility but all with the same goal,” Karin remembers. The couple made some of their closest friends over that long weekend. Before the retreat Ian was still eating meat and dairy. After the retreat he emptied the fridge and freezer of “his” food. He was able to reduce the medication he was on for high blood pressure, eventually managing his blood pressure with a whole food plant based diet alone.

You can purchase e-cards through 'Don’t Send Me a Card' featuring designs by Karin and other OMS supporters. All donations benefit the Overcoming MS mission of informing, supporting and empowering people affected by MS worldwide.

If you would like your artwork and story featured, please email [email protected]