MS and the sunflower of hope

Martin shares his experiences with the Hidden Disability Lanyard Scheme introduced to the UK in 2016. A while back my son told me about something called the Hidden Disabilities Sunflower Lanyard Scheme.  It was launched at Gatwick Airport in 2016 to enable staff to recognise that the wearer of a lanyard bearing a sunflower logo on a green background has a hidden illness, and may need extra help when moving through the airport.

The Sunflower has begun to be globally recognised and is now to be seen in all major airports, supermarkets and railway stations which thrills me beyond words.  Although this isn’t exclusively for anyone with multiple sclerosis (MS), but as an MSer myself, it has given me hope that finally it will put an end to the stickman in the white wheelchair as being representative of people like me.

The uncomplicated premise of finding a simple sunflower to represent people who have a hidden disability has been something of a breakthrough moment.  Friends also have become more aware just in case I haven’t. The fact they connect in such a positive way confirms a simple truth.

The clichéd imagery of disability being represented by the sign of a wheelchair plastered on parking bays or toilet cubicle doors means their days are numbered.  While the hidden disabilities sunflower represents happiness, positivity and strength, the person in the wheelchair only denotes weakness and pity.

If a 21st century sunflower succeeds where a 1960s wheelchair has failed in making society more aware of MS and other invisible disabilities, then better late than never. Live life - not MS. 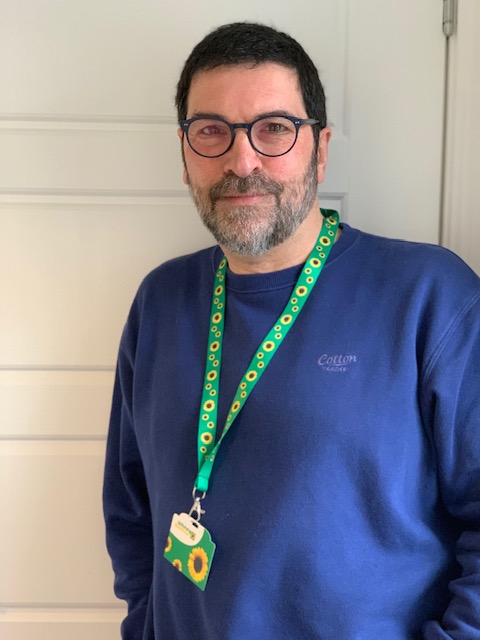 Previously a writer of comedy and satire for stage, radio and satirical clubs, Martin was contracted to write a musical for the West End and Broadway inspired by his best-selling book, “To Be Or Not To Be, Innit, a Yoof-Speak Guide to Shakespeare”.

After several MS relapses Martin is rebuilding his writing career as a Multiple Sclerosis Blogger and Influencer.

Martin’s blogs are useful to everyone, not just MS, but Parkinsons and other illness as they are written with truth, humour and encouragement. Thank you.

Great article . I like the positive message of the sunflower. Having friends and patients who use wheelchairs I never associate the sign of a person in a wheelchair as only denoting weakness and pity. I think that is harsh and not at all how we feel about persons who use wheelchairs.

Excellent article..! So pleased to hear the Sunflower is having a positive effect on your life.

Really enjoyed the article. I am moved by the symbolism and recognition that the Sunflower ? brings.

Getting back on track with OMS

"It’s hard, and there’s no getting away from it. But the police officer in me won’t back down just like I wouldn’t if I found myself up against a violent criminal."
Dislike 0
0 Likes
9

The UK Government has made a recent announcement, relevant to people with MS, which talks about 'social distancing' - what is the advice and what does this term mean?
Dislike 0
0 Likes
1