I remember the first year with MS being very hard. I lived in fear: fear of stigma, fear of being seen differently, as ill.
Personal story

I can’t trace the origin, but I grew up with this sense of foreboding. Though I was a happy kid, I had this expectation that something physical or maybe existential would befall me.

My reaction was probably an unconscious one: I exercised religiously, took up boxing, read philosophy, identified with survivor stories, probably all to be ready.

When it came (four years ago) – “you have MS” – I’d like to think I was somehow prepared. But, make no mistake, the experience – the confusion, MRIs, spinal tap, a “life altered” – rang like a thundercloud.

I remember the first year being very hard. I lived in fear: fear of stigma, fear of being seen differently, as ill. I stayed close with friends, but let very few in on my diagnosis.

With most I tried to stay 'business as usual' and I gave some creative explanations for my time in the hospital. I was always very active, strong: integral parts to my identity; I was terrified MS would erode it.

Humans are tribal and, deep down, despite my physicality, I think I was always afraid of being seen as weak; I trembled at the thought of being cast out of the tribe. But the hardest part about the diagnosis was the 'wait and see' attitude. My doctor said “you can’t beat MS, though attitude helps”.

I so wanted to 'beat' MS; I wanted a pitched battle, me against the foreign invader, the battle I was prepared for. That’s the thing about autoimmune disease: there is no invader – it is the body literally attacking itself; it’s 'I against I' and there is no winning. What I did know, though, was that I needed help.

"I remember the first year being very hard. I lived in fear: fear of stigma, fear of being seen differently, as ill. I stayed close with friends, but let very few in on my diagnosis."

In time, with the help of a loved one, I found OMS. At first I was totally dubious – lifestyle options had never even been discussed by doctors – but I needed change, my life depended on it.

I read the books, culled the science behind them and felt renewed. Upon deciding, the fridge was emptied, the changes were made. I knew there were no guarantees with any treatment – and OMS can be extremely hard work – but I believed it was my one path to health. Here, I learned that 'surviving' this disease was much more than diet, though.

I believe that MS, for some, is the manifestation of some disequilibrium, maybe a life not lived, or scars unhealed, and the body rebels.

The transformative nature of MS

That may sound simplistic, but I believe it was true in my case. I had to dig deep, ask some very provocative questions. 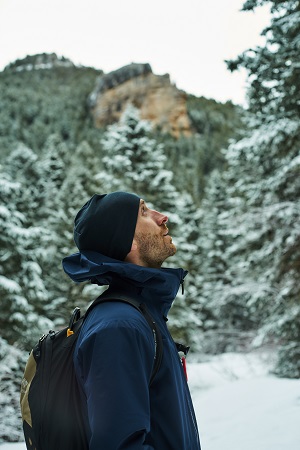 I cannot really call the diagnosis a gift, though in some sense it resembles one, but it can have absolute transformative power.

Being told you have a major diagnosis like MS is to put your soul in a crucible; to endure or survive it is to draw tremendous inner strength, the kind I feel blessed to sometimes feel.

In time, I realized that to live in harmony with this disease I needed to face the challenges that I truly wanted for myself, not those that I was taking on in order to impress others; I needed to be authentic.

I took a right turn from my graduate school background and started work as a professional trainer. I felt helping others maintain a healthy lifestyle (and 'walking the talk') would give me much more purpose.

I took on teaching one of the most rigorous and technical classes at my local gym and by 'teach' I mean I do.

Everyday I'm getting stronger, nimbler, quicker; I’m healing. Weeks ago, a young woman approached me about my class. Quickly, she disclosed her MS diagnosis.

She was very functional, had some balance issues, but was concerned about the difficulty of the class. I so wanted to applaud her: "you can do this – I have MS too and I teach the class!"

But, I just couldn’t find the courage to share; I was too afraid. I could tell she was looking at me and thinking some version of: "here's this fit guy – I just wouldn’t belong."

A connection like that when first diagnosed would have impacted me in ways I can’t imagine. I felt like a fraud – the dissonance was palpable.

But that day was a tremendous watershed moment for me. I realized being authentic was to be more open with this condition. It does not have to be my story, for it’s not, but it is part of my identity, indelibly.

From victim to survivor

Further, OMS is the counterpunch to that stigma, that fear; it changed my lens from that of victim to survivor. Nonetheless, putting one’s private diagnosis out into the universe is no easy thing.

And doing it right now, for the first time, brings up familiar fears of judgment. But if I can help even one person learn of OMS, or affect how this disease is perceived, is there really a choice?

I think not. Today, I have been OMS for nearly two years and I continue to feel stronger, but well beyond the physical.

I’m still wandering some, trying to make sense of how I can best serve in this life, but I’m confident – even through this letter – that I will soon have two feet firmly on the path and there is much more ahead.