I hate flaxseed oil. I have a choice, of course. I don’t have to use it. But I follow OMS, and Professor Jelinek recommends 20mls or more daily
flaxseed oil

Although it is a key part of the OMS recovery program - Professor Jelinek recommends 20mls or more daily - flaxseed oil is not to everyone's taste.

Of course, everyone has a choice over whether or not to use it, so it's worth going into why the oil is so important for the program. In his study, Swank found that the people who did best not only reduced their saturated fat dramatically, but also increased their intake of unsaturated fats or oils.

They replaced the bad fats with good fats. And flaxseed oil also has the added great health benefit of being an omega 3. The HOLISM study confirmed those earlier findings.

‘Of the 2,500 PwMS world-wide who were in the study,’ Professor Jelinek writes, ‘those taking flaxseed oil supplements regularly had over 60% fewer relapses than those not taking it.’

So there you have it. It’s a must. At one OMS retreat, some people on the program - who used the oil both as a food dressing and on their toast instead of butter - said things like:

"I can’t get enough of this stuff – it’s delicious on almost everything." "I just drink it neat – it’s so lovely."

"It’s not going anywhere near my food." "It makes me heave. Once I was even sick after taking a spoonful neat." "I can’t get rid of the taste for hours."

So, clearly, there are those who think the oil enhances whatever they’re eating, and keep on pouring – and those who will try anything to disguise the taste. It seems you either love it or you hate it.

If you’re in the Hate It camp, you’re not alone. So what can you do to disguise it? Some suggestions from people on the retreat were to mix it in smoothies, or in a ginger and lemon drink.

Or to take it neat, but immediately follow it by strong coffee, or a meal. (By ‘follow it’, they mean swig the oil from a measuring spoon in your left hand, while in your right hand you hold a forkful of food, ready to be thrust into the mouth the moment the flaxseed oil is swallowed.)

Even those four suggestions don’t disguise the taste enough for some. Alternatively, mix it into a salad dressing - which really does take the taste away. There are many varieties and colours of salad, and you can mix in quinoa or top it with hummus for example, so it’s not all samey. 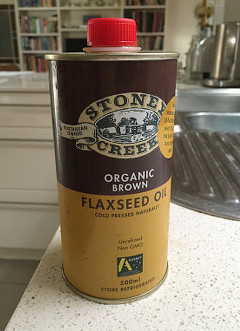 And then as many of the following as you want:

Tamarind/soy sauce Ground ginger Lemon juice Lime juice Black pepper Give it a try. And any more suggestions/recipes will be very welcome. You might even have the solution that stops someone in the Hate It camp from giving up the flaxseed fight.