Dr Jonathan White explains the results of two separate studies which looked at treatment of people over the age of 53.
Medication

In November 2017, a large-scale study was published that caused major concern and confusion amongst the MS community (1). From a meta-analysis of more than 28,000 people with MS (pwMS) taking a disease modifying treatment (DMT), researchers concluded that “after age 53…there is no predicted benefit to receiving immunomodulatory DMTs for the average MS patient”.

“I’m 55, does that mean I should just stop my medication tomorrow?”

It remains a difficult question to answer when applied to “the real-world” person with MS (pwMS), many of whom had been taking, and remained well on medication for a lengthy period of time. It is extremely important then, that both pwMS and clinicians have as much information as possible to allow for informed decision making.

A new paper may add a very valuable perspective to this particular problem (2).  Published in “Multiple Sclerosis and Related Disorders”, a team from the United States looked at pwMS over 60, and whether stopping or continuing their medications had any impact on various health-related outcomes.

This was a retrospective, observational study (looking back at results already obtained rather than setting up a new study and testing a particular intervention) including 600 pwMS who were 60 years of age or older and had been on a DMT for 2 years or more.

The researchers focused on patient reported outcomes (PROs) and timed 25-foot walk (T25FW) test as their key outcome measures.  In simple terms, they asked the people involved a series of standardised questions to gain an understanding of their level of functioning or disability (including mobility, fatigue, cognition, bowel and bladder function, spasticity, hand function, vision and sensation) and other measures such as pain scores and levels of anxiety and depression.  They then objectively measured how long it took the pwMS to walk 25 feet.

At the time of discontinuation, the majority (66%) were taking either interferon-beta or glatiramer acetate (copaxone), with fewer people (16.9%) taking oral therapies (fingolimod, tecfidera, teriflunomide) and 8 receiving infusion therapies (natalizumab).  There were also 21 patients receiving unapproved treatments. 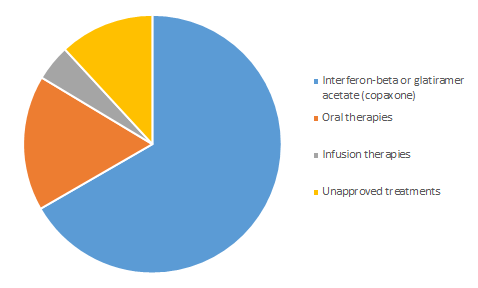 Discontinuation was recommended by the clinician to 68% of those that stopped their medications, with the most common reasons being:

They found some extremely interesting results. Firstly, that those who stopped their medication had a statistically significant better quality of live over time than those that continued to use DMTs. The authors quite rightly point out that this may at least in part be due to the fact that many had stopped due to side effects, and therefore simply felt better for not taking the treatment, rather than any direct effect on their MS.

Of those 178 people that stopped treatments, there was only one confirmed relapse during the average follow-up period of 5 years.

The researchers made allowances for the different characteristics of those in the study in terms of:

There were no significant differences found between those that continued their medications and those that stopped over age 60, with very similar results in terms of timed 25-foot walk test and all other measures of disability and quality of physical and mental health.

“overall, stopping DMT in patients with MS over age 60 appears to have minimal effect on quality of life outcomes…the results of our study may support stopping treatment in patients over 60, however, further research is needed to determine long-term impact of DMT discontinuation”.

In the meantime, OMS will continue to support each individual’s decision on whether or not they choose to start or stop any particular disease modifying treatment.